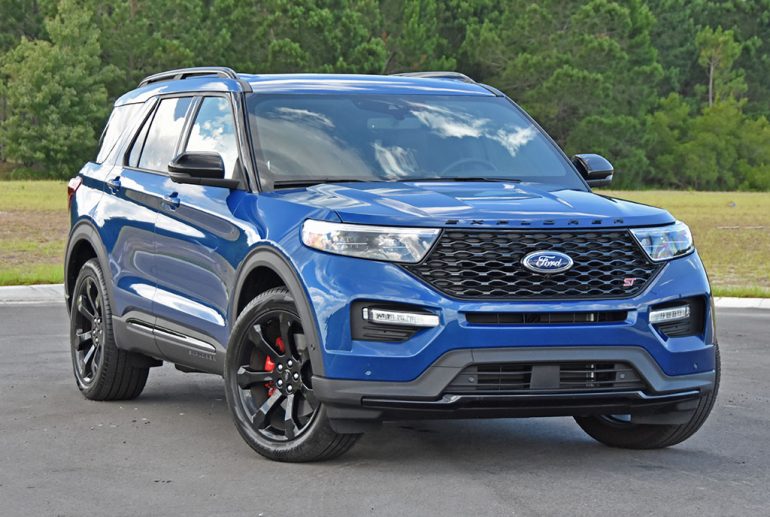 The Ford Explorer is the vehicle that helped launch a love affair for the SUV, injecting it into the mainstream automotive market from its introduction in 1990. Since then, the Ford Explorer has remained a household name, and with the newly redesigned 2020 model year, it returns to its rear-wheel-drive based roots on an all-new platform that is shared by the luxury market Lincoln Aviator.

The 2020 Ford Explorer was introduced with a rocky start, but since its rollout earlier in 2019, it has gained the proper recognition as a worthy contender in a growingly competitive segment for mainstream midsized three-row crossover utility vehicles. For such a segment, the Ford Explorer brings a sporty and powerful trim level to the party, the Explorer ST. The new Explorer ST utilizes Ford’s latest 3.0-liter twin-turbo V6 engine mated to the popularized 10-speed automatic transmission, virtually the same powertrain found in its new 2020 Lincoln Aviator counterpart. Worthy for the luxury brand, the Ford Explorer ST’s powertrain is quite a performer with 400 horsepower and 415 pound-feet of torque sent through a compliant 10-speed automatic transmission and then to all four wheels. The Explorer ST only comes in an all-wheel-drive configuration where it is rear-wheel-drive bias due to the new architecture and platform for the Explorer. 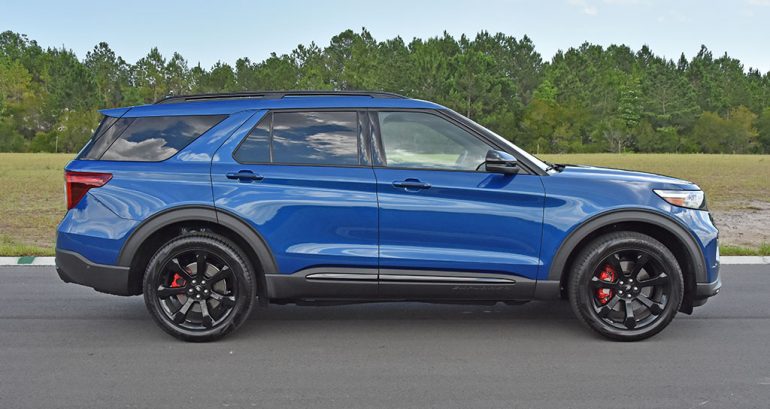 The move to a rear-wheel-drive Explorer improves upon the overall driving character more towards the side of sportiness for all trim levels but not too far to turn off consumers who are looking for a plusher variation of the Explorer, which is found in mostly all trims except the ST. With the Explorer ST, things get a little spicy with performance where the ride quality is firm, almost too firm for some but me being an enthusiast – I like it. The Explorer ST is nicely planted to the ground, and it moves with authority, often feeling like a torque-monster diesel engine powering through the gears. While the new Explorer has many gears to play with, the logic of the new 10-speed is smart enough to ride through and hold gears to utilize the ample torque of the EcoBoost V6 engine. Together the powertrain provides enough oomph to get up to 60 mph in just 5.2 seconds or faster in some tests. 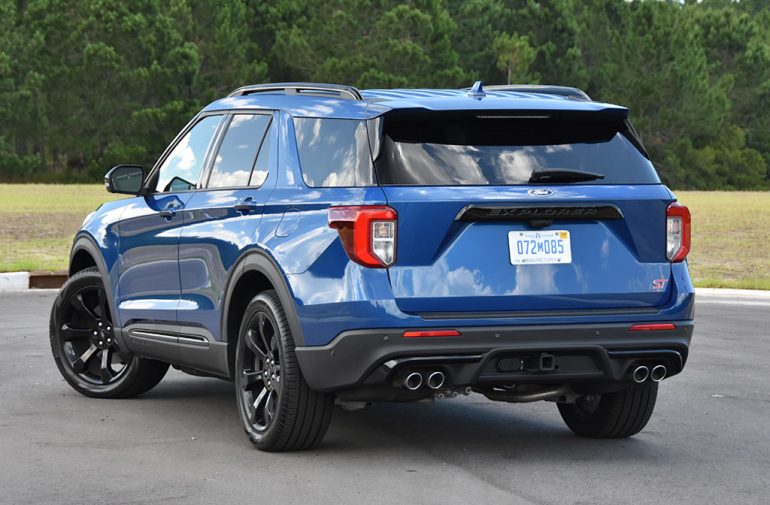 Handling of the new Explorer ST is almost reminiscent of the BMW X5 with M-Motorsport add-ons, which goes the distance to say a lot for Ford’s engineering. There’s a welcomed assured feeling from the Explorer ST and a rather sharp and quick steering rack despite the steering being mostly numb for feedback from the road. The braking is strong from the two-piston calipers up front and decently-sized rotors. 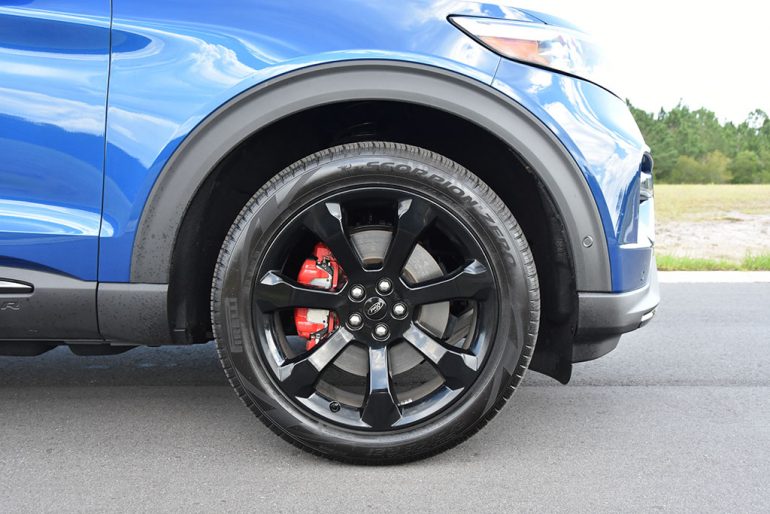 Fuel consumption is pretty good and consistent for the amount of power that you get out of the Explorer ST from what I observed nearly matching the EPA figures of 18 mpg city, 24 mpg highway, and 20 mpg city. 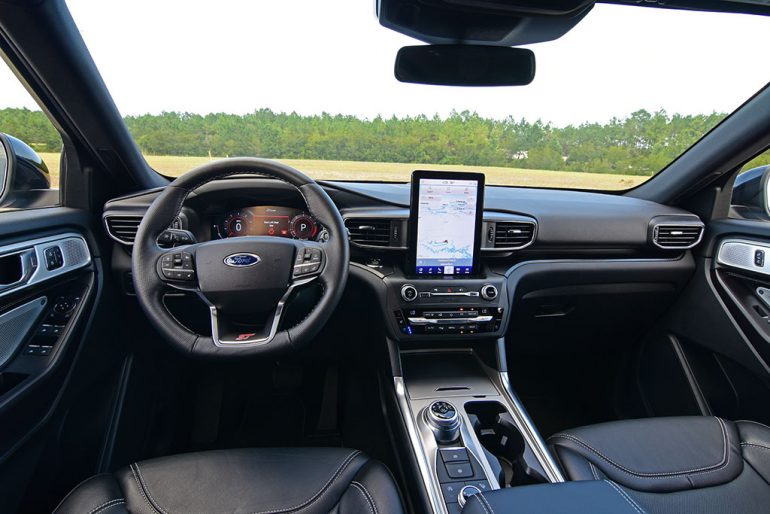 Getting into the new 2020 Explorer ST is somewhat of a familiar overall feel from the Ford brand. Here, the interior doesn’t shine too bright as there’s not much of a premium feel other than the look of the 12.3-inch gauge cluster LCD color screen and the optional 10.1-inch infotainment touchscreen that’s mounted in portrait orientation. The central screen brings in everyone’s attention because it stands so tall and begs for your touch to see what it can do. Unfortunately, what it does is has somewhat of a mismatch of displays where certain things just don’t feel cohesive or necessarily utilize the best of the extra screen real estate. The number one thing that doesn’t make wise use of the screen’s size is the 360-degree camera system, where it forces smaller video feeds shoved in the upper portion of the screen. Other items that seem more of a compromise is the display of Apple CarPlay or Android Auto, which also looks shrunken. Possibly the use of a similar-sized screen only in a landscape orientation would have done much better for the Explorer. Still, buyers can opt for the standard 8-inch screen, which may be the better choice for some. Otherwise, the latest version of Sync is user-friendly and mostly responsive. 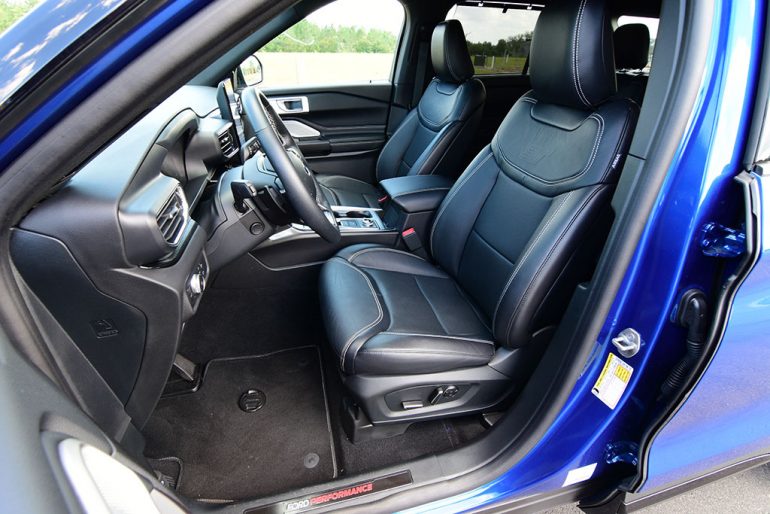 The seating areas of the new Explorer are good with respectable space throughout. Though the only downfall here is that there is no 8-passenger option, you’re stuck with either a 7-passenger setup through a second-row bench seat, or a 6-passenger setup with the second-row captain’s chairs, which adjust forward, back, and have a decent recline and push-button pneumatic sliding system to make way to enter the third row. 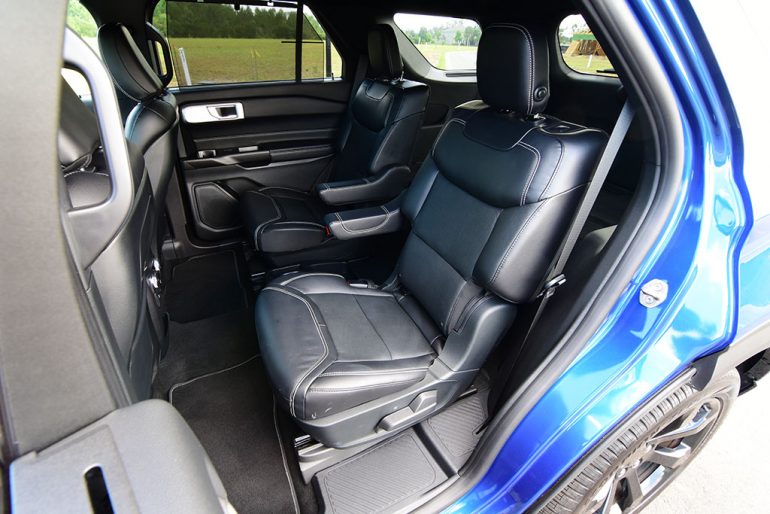 Cargo area is improved over previous Explorers and is among the best in its class behind the third-row seats. The third-row seats are the only ones with a power-fold system as the second row requires a manual lift of a side lever to fold them down, opening up over 87 cubic feet of cargo space accessed by a hands-free power liftgate. 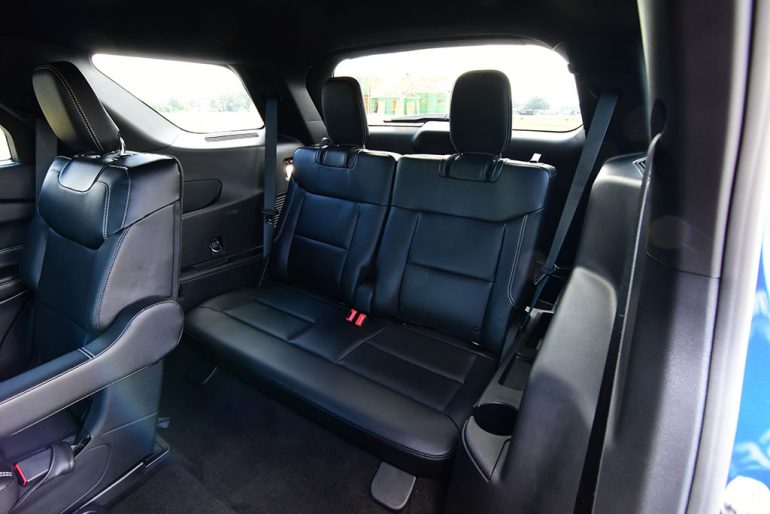 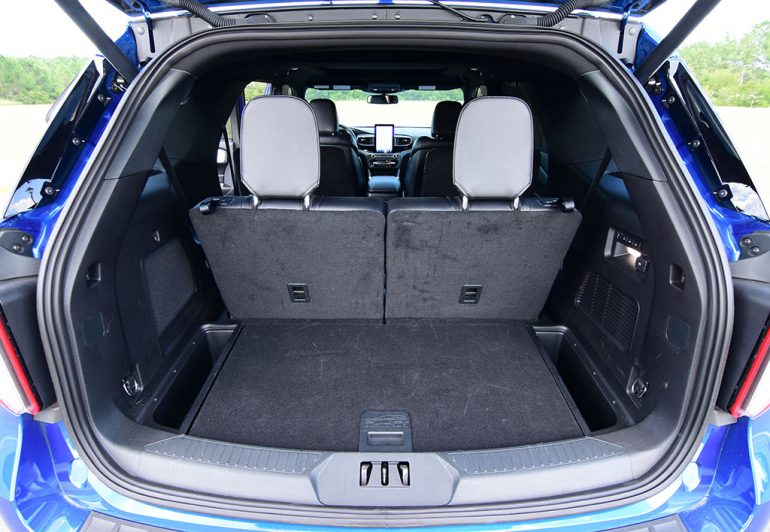 The 2020 Ford Explorer ST is a commendable enthusiast approach to the mainstream three-row crossover that you can only go to something like the Dodge Durango R/T or SRT model for true competition in such a unique offering. Pricing for the new 2020 Ford Explorer ST, with it being the top-trim level, departs from most other trims (and some competition) at a price of $58,000 up to nearly $60,000 for my loaded-up test vehicle.