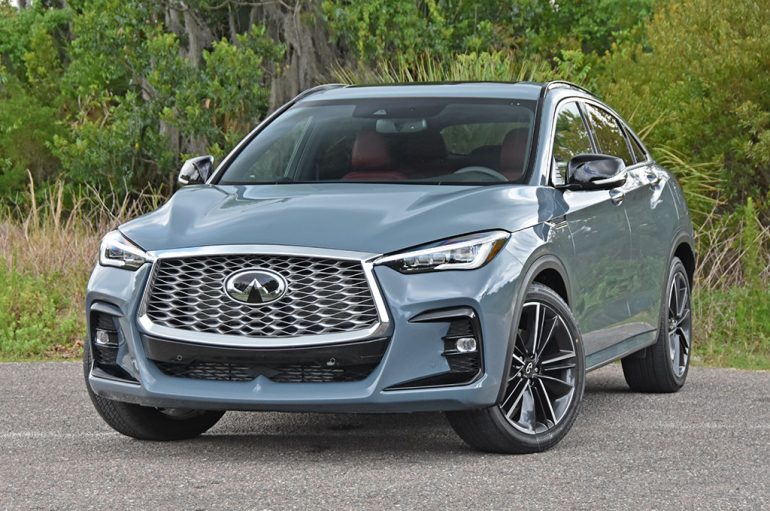 The Infiniti luxury brand has had its challenges in recent years but from many lessons learned, the brand is starting to get a good foothold to reignite its presence starting with vehicles like the all-new QX55, a coupe-like-styled variation of the QX50 crossover.

I had some quality time in the QX55 crossover recently and my takeaway is mostly a vehicle that is almost in the realm of greatness only held back by a couple of details, mostly surrounding the choice of its transmission being a CVT (Continuously Variable Transmission). Otherwise, the QX55 is a welcomed addition to the growing lineup of luxury crossovers sporting a unique sloping roofline from a brand that essentially started such a movement of coupe-styled crossovers with the FX35/FX45/FX50/QX70 variations that have stood the test of time. 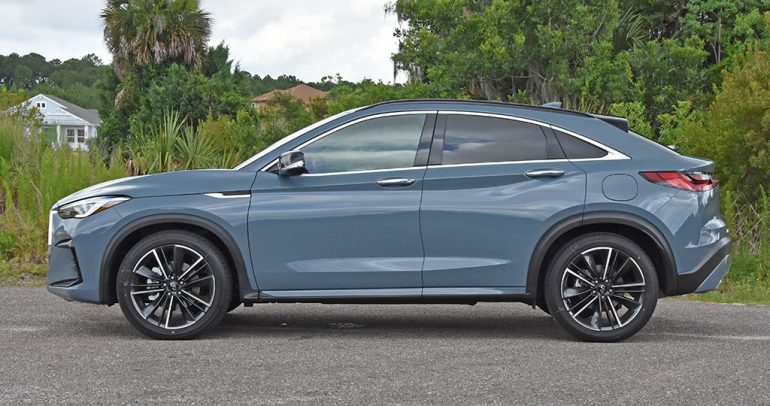 The new Infiniti QX55 is part of a new movement by the brand to signify a new level of elegance in its style and subtle retention of sporty elements that were once known to be the forte of the old FX/QX70 crossovers of the past, which shared many chassis components from the Nissan Z. The QX55 embodies more of the FX/QX70 exterior design elements, which is a good thing considering there’s still a strong fan base of the older midsized crossover – the one that was once called the bionic cheetah. However, the QX55 makes somewhat of a compromise in my eye that is hopefully remedied in the years to come as it is in the upcoming QX60 now touting a traditional automatic transmission over the outgoing CVT. Also, the QX55 is still front-wheel-drive based and nothing like the upcoming RWD Nissan Z, unfortunately – but that’s okay. 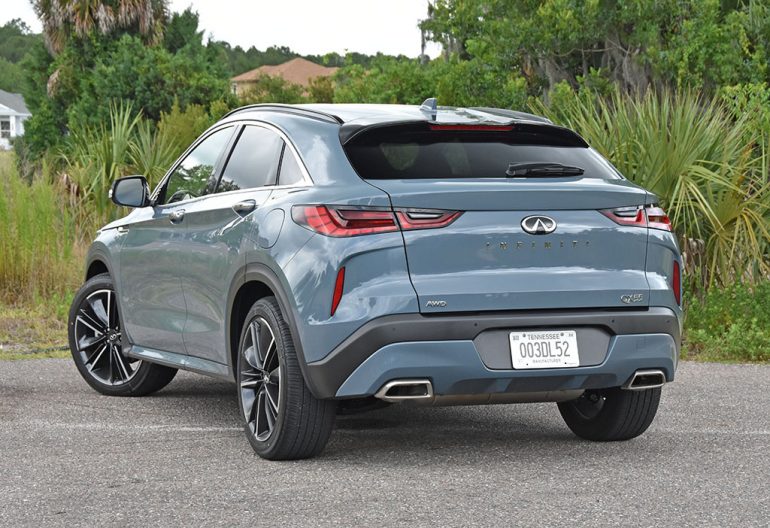 Powered by a unique offering in the world of powertrains, the QX55 uses its closely matched sibling’s 2.0-liter turbocharged variable compression inline 4-cylinder engine, which is quite the gem. It produces 268 horsepower and 280 lb-ft of torque and isn’t shy about revving up to give a little extra grunt to the QX55 when power is demanded. Though, the power is only as good as what the CVT can muster in its nearly infinite gearing ratios that tend to often emulate a traditional automatic transmission with virtual ratio step-downs when accelerating. The feeling of the virtual ratio steps are nice but one has to wonder if they even add to the overall performance of the QX55, which is mimicked in the QX50 that I’ve reviewed many times in the past. The downfall of pairing such an excellent engine to a CVT is that the initial acceleration suffers mostly when you first press the accelerator there isn’t much action. It’s only when things start moving around 25 mph that the QX55 comes alive and starts to pull hard making a dash to 60 mph from a standstill in about 6.5 seconds. 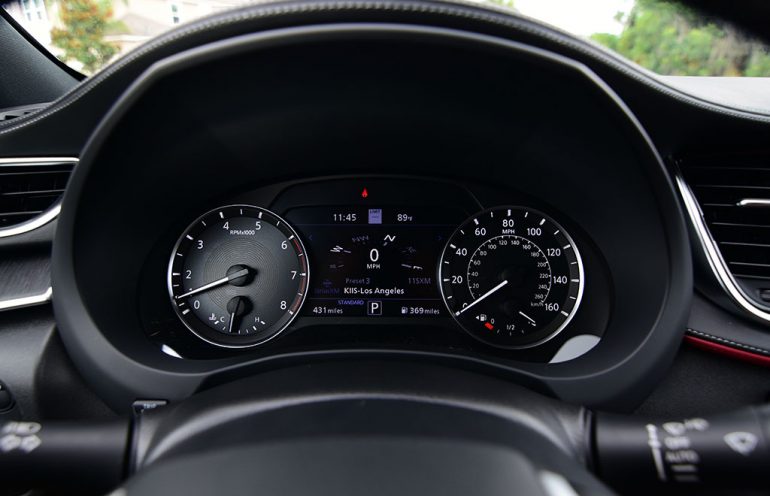 What is surprising about the QX55 in the area of performance is its nicely balanced and smooth ride quality that feels assured without unwanted firmness on the sporty side. The 20-inch wheels and run-flat performance tires do well to keep the QX55 planted and make the best use of its all-wheel-drive system, which comes as standard in all three QX55 trim levels. The other characteristic that I’m also not a fan of bedsides the CVT, is the direct adaptive steering setup found as a standard feature in my top trimmed QX55 Sensory test vehicle. The direct adaptive steering, as mentioned in many previous reviews of various Infiniti vehicles, utilizes a servo system that doesn’t exactly have a physical connection between the steering wheel and the front wheels. Essentially, the system is a steer-by-wire setup that can be physically connected in the event that the system fails as a welcomed backup to retain control of the vehicle. In all, the latest iteration of the steering system is closer to a natural feel but lacks any usable feedback or quickly learned reference of how fast your front wheels will turn with a natural progression of steering the wheel. 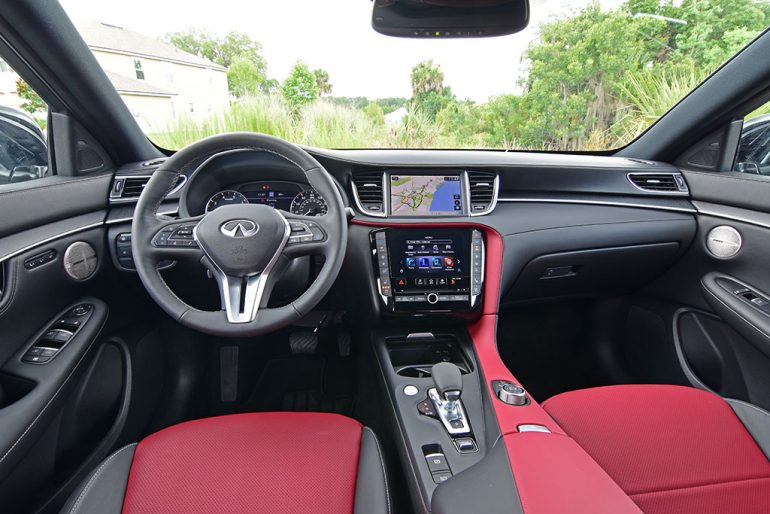 The fuel economy is respectable with the EPA estimates of 22 mpg city and 28 mpg highway. 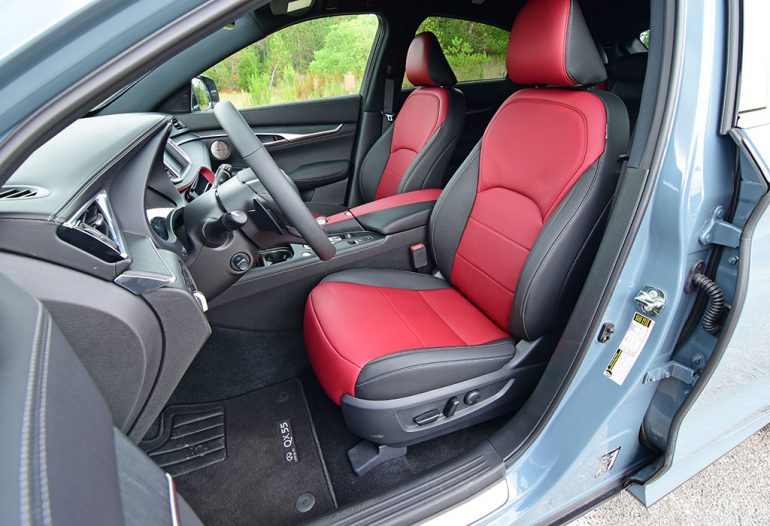 As far as luxury appeal and expected luxury amenities, the QX55 in its Sensory trim gives you just what you want with the highlighted features of heated and ventilated front seats, color heads-up display, a motion-activated power rear liftgate, cube designed LED headlights, semi-aniline leather seats, 360-degree camera system, 3-zone automatic climate control, interior ambient lighting, open-pore interior wood trim, and a plethora of active safety features that include the intelligent cruise control and ProPILOT Assist features. There’s also the use of wireless Apple CarPlay and Android Auto integration, which are fed through the same split-screen infotainment of the QX50 and other recent Infiniti vehicles. The system has a slight learning curve but is straight forward once you spend a couple of days of use. The system does feel a little dated at times when viewing the top navigation screen. I do welcome the redundancy of controls from the center physical controller and few dedicated buttons along with both screens being a touch screen for easy use of Apple CarPlay, which can also be paired through USB or wireless. 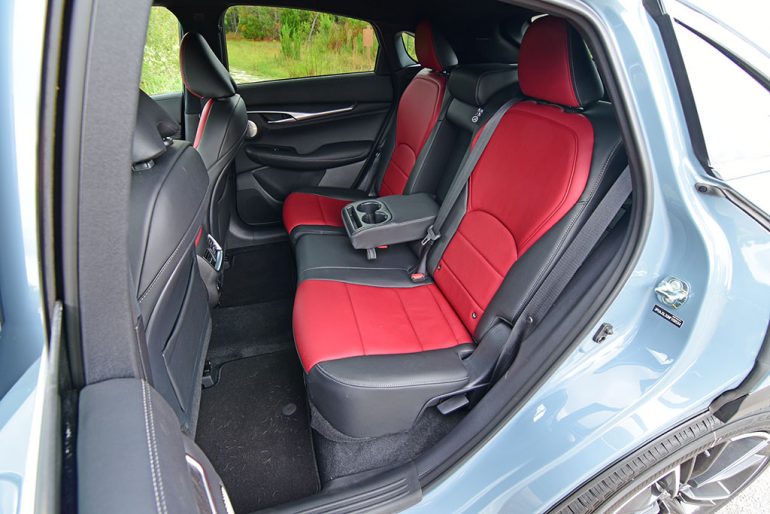 The QX55 somewhat elevates the elegance of the QX50 and may reflect such in its higher pricing over its sibling. Surprisingly, the storage area isn’t cut down much by the lower sloping roofline of the QX55 over the QX50. Here, Infiniti did well to play up a neat design aspect without sacrificing much cargo volume. 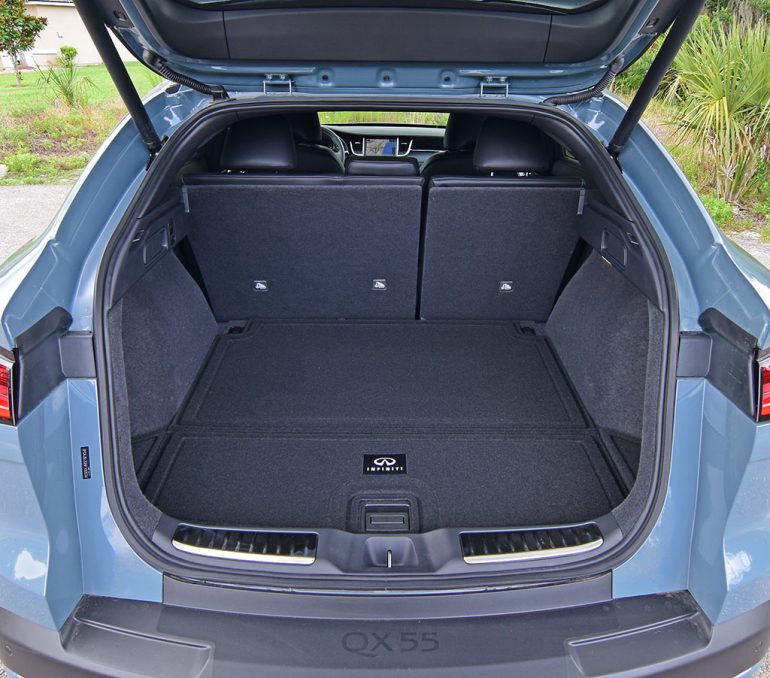 In all, the QX55 is a nice addition that many may not have asked for. However, having the QX55 adds a respected appeal to the Infiniti brand to show they too can still be exciting and offer something unique in the vast landscape of crossover utility vehicles. 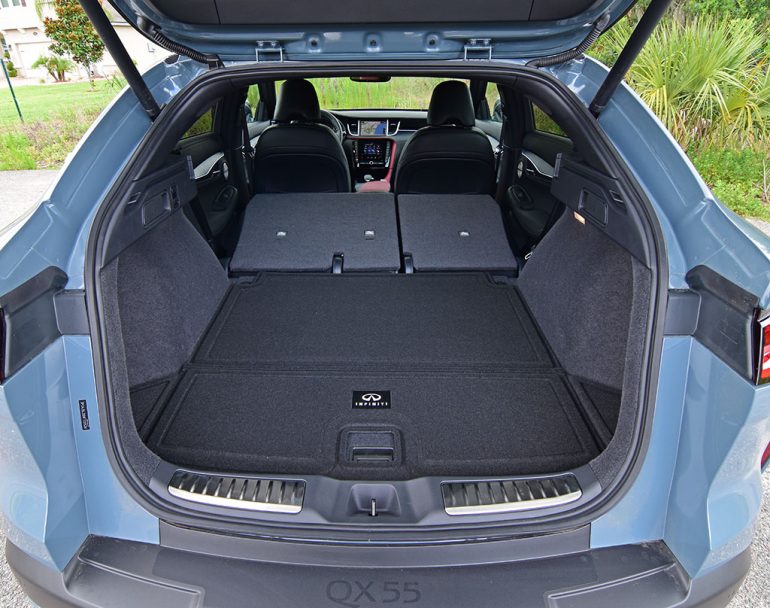 Pricing for the all-new QX55 starts at $46,500 for the base Luxe AWD trim and goes up to $57,050 for the Sensory AWD. My test vehicle comes to a price of $59,255 after the upgraded paint option and destination charges.