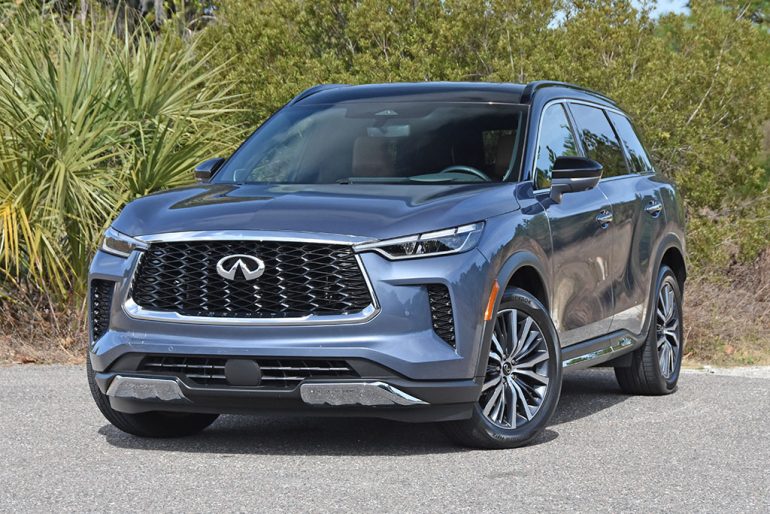 Infiniti used to be a brand that I stood firmly in their corner and wanted to be a part of for many years considering our family owned a V8-powered 2009 Infiniti FX50 for many years and praised it for being one of the best vehicles we ever owned. After ownership of our FX50, the brand seemed to not have vehicles for people like myself, enthusiasts who once respected the Infiniti brand for being a little bold for the approach to luxury and performance wrapped in a unique eye-catching package. Now, after spending a week in the newly redesigned 2022 Infiniti QX60 I can safely say some of that old passion that attracted people like myself has returned, somewhat.

The new 2022 Infiniti QX60 is completely redesigned for the model year with its biggest welcoming change being the move to a conventional automatic transmission over the outgoing CVT (Continuously Variable Transmission). Such a move has raised the eyebrows of many and is respected amongst the automotive community and those who are lighthearted enthusiasts. However, the transmission change isn’t the only thing that’s going to win over a new audience in the QX60, it offers up a much more cohesive luxury package that’s refined outside and in that will ultimately give the competition a new run for their money, almost in a literal sense. 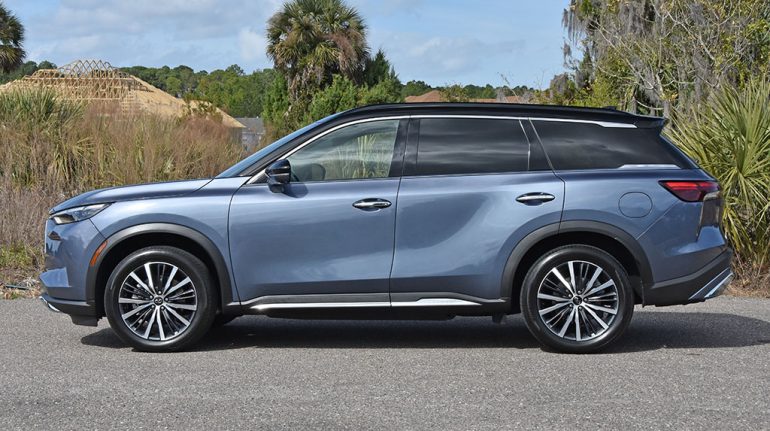 Powering the new 2022 QX60 is their tried and true 3.5-liter V6 engine, which at this point is a brand favorite and a powerplant that has stood the test of time. Producing 295 horsepower and 270 lb-ft of torque, the V6 gets a new life to put down power through an automatic transmission with real gears, 9 of them. The new 9-speed automatic transmission is a smooth operator only hindered by somewhat slow shifts and lethargic actions when you place it into drive, reverse, or park. Basically, the transmission takes a little longer than I would like to react to your simple shifts using a unique but easy-to-use shifter. 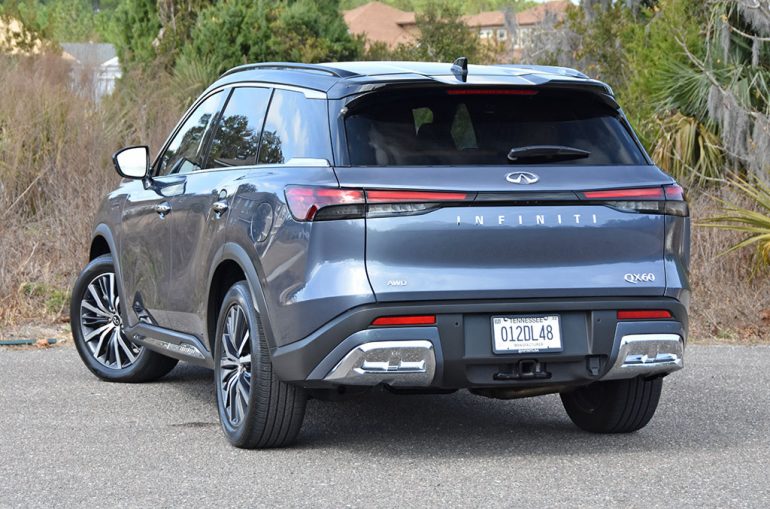 Out on the road, the transmission behaves almost in the background with smooth shifts that you can hardly tell are happening. The benefit is with the physical gearing the V6 feels more substantial and gets off the line a lot quicker than the outgoing model with the CVT. Acceleration is improved and takes about 7.3 seconds to hit 60 mph versus the outgoing models near 8-second feat. 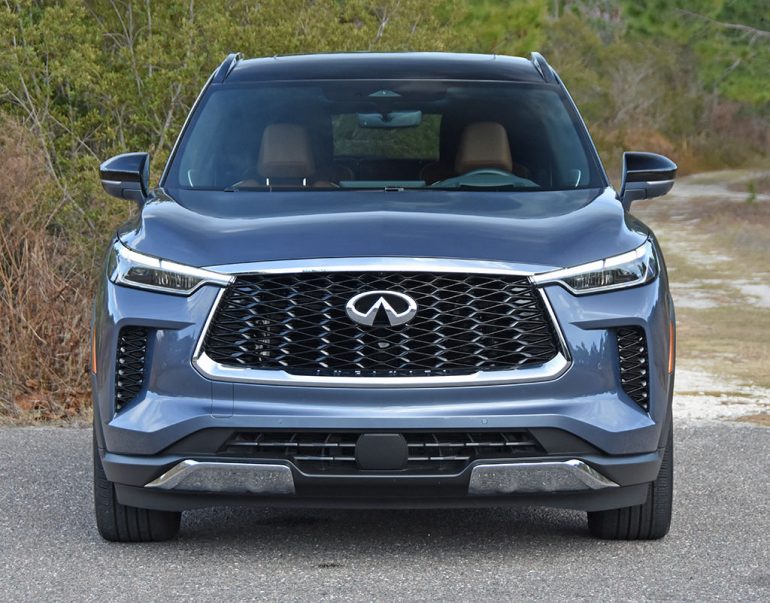 Another welcomed improvement in the QX60 is fuel economy, which is now 21 mpg city, 26 mpg highway, and 23 mpg combined in the front-wheel-drive models. All-wheel-drive models get one less mpg across the board. 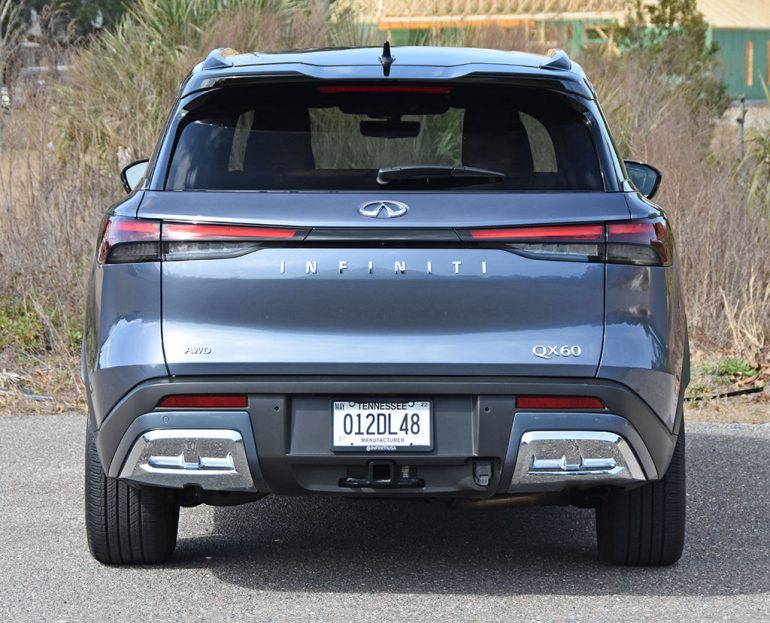 Ride quality is good but tends to be a little on the stiff side and more noticeable when you hit road imperfections and go over dips and rises in the road. Otherwise, the QX60 has a nice light-on-its-feet feeling that’s welcomed for a large 3-row crossover. The steering rack is surprisingly heavy and mostly numb through the electric assist, which is only exacerbated by using the sport drive mode, one of five modes (Sport, Standard, Eco, Snow, Personal). Use of the sport mode only subtly changes the shift patters and Eco mode tends to shift sooner to keep the RPMs low. Overall, the QX60 drives excellent and inspires confidence through its all-wheel-drive system and somewhat sporty feel. With front-wheel-drive being standard, I imagine that traction and stability control may intervene a lot to curtail wheel spin upon initial acceleration without the all-wheel-drive system because my AWD test vehicle starts to break the fronts loose just before power is sent to the rear when coming out of turns. 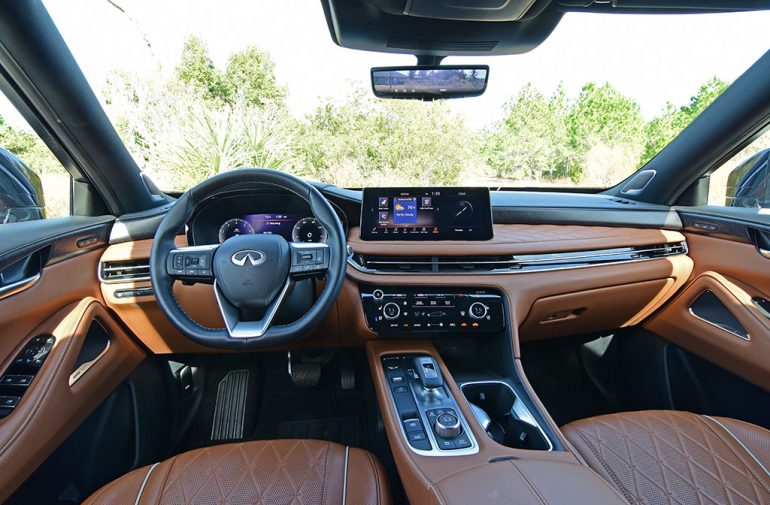 The interior of the newly redesigned QX60 is an inviting space with several smart-thinking advancements and changes to how the seats are positioned. There’s now even easier access to the third row of seats from a nifty actuation of the second-row seats tipping forward, which can also be done while leaving a child’s forward-facing car seat in place. All three rows of seats are accommodating while up front the plush quilted leather heated, ventilated, and massaging seats in the QX60 Autograph trim are exceptionally comfy. The only drawback here, and I’m nitpicking a little, is that the massage function only massages your back and lumbar area instead of your bottom. The second-row seats, a captain’s chair setup in my QX60 Autograph test vehicle, are surprisingly comfy as well but only provide heating as there is no option for ventilation as found in some lower-costing three-row mainstream vehicles like the Kia Telluride. Once you’re in the third row, there’s a bit of usable space for two adults that could easily be happy for a couple of hours. 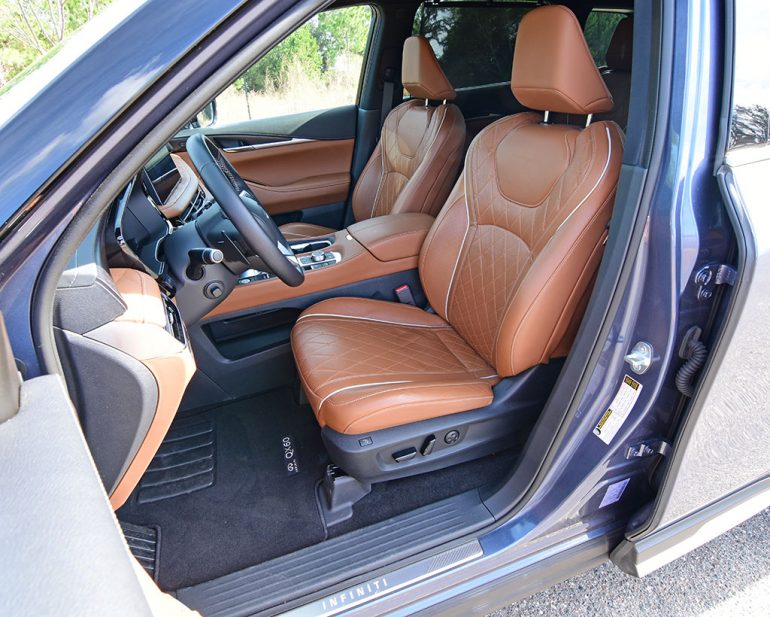 The advancements of technology have afforded all new vehicles to have a plethora of infotainment integrations, and such is no different in the new QX60. The new infotainment system fed through a large 12.3-inch touchscreen is mounted high and is easy to see and reach. The system has a slight learning curve that I found to be somewhat cumbersome at first but after spending a couple of days learning the menus it was just fine. There is a major drawback to how you tune radio and satellite radio stations and at times you tend to bounce back and forth for using the touchscreen and physical controller knob for the infotainment system all because the operation doesn’t flow as well as you would think. 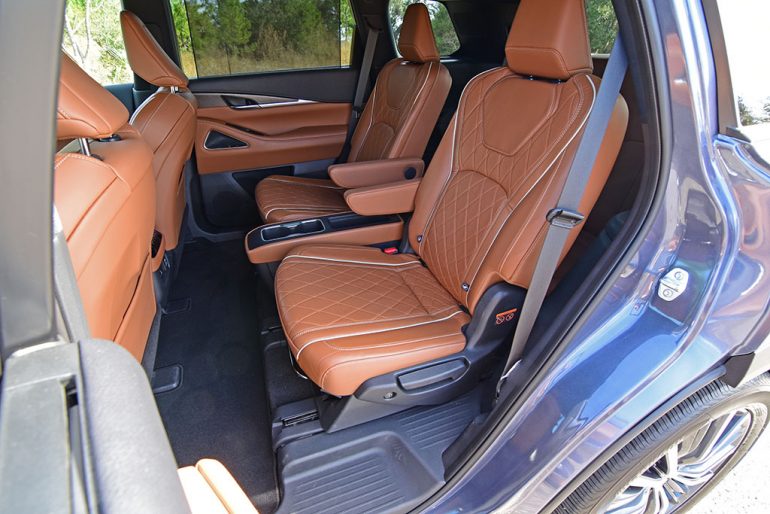 Using a new clever way of controlling the audio seek/station-change and automatic climate control through a touch-capacitive panel with haptic feedback can be a love or hate situation. Once you become accustomed to how the panel responds to your touch it becomes second nature, but some may find it difficult to navigate the panel and can be initially distracting. However, the control panel is a nice way of keeping the dashboard clean so you can view the several soft-touch surfaces and quilted stitched leather throughout the dashboard, which all adds a nice luxury appeal to the cabin. 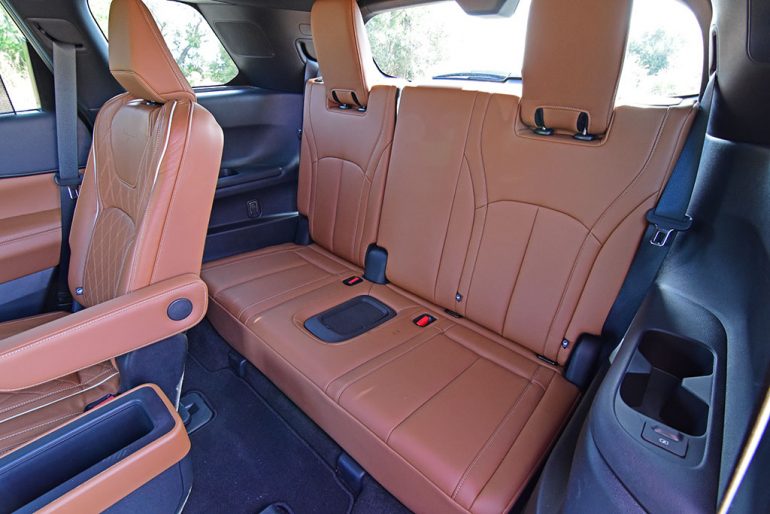 The 12.3-inch digital driver’s gauge cluster is also a nice touch with the ability to switch between a more conventional gauge display to a 3D-style view of primary vehicle information. The color heads-up display is large, but the speed display is shoved too far to the right where it often gets cut off if you tend to lean your head a little to the right. Infiniti could easily reprogram the display to move the digital speed readout more to the center focal area of your head. My last issue with the interior of the QX60 is the vent sliders for air direction adjustment. These sliders feel like cheap plastic and are not very user-friendly as they feel like they get caught up at the bottom of the vent when adjusted. 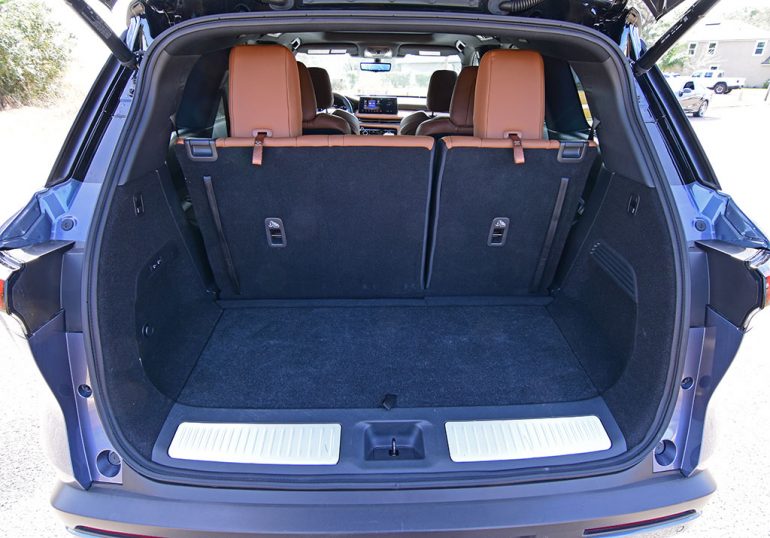 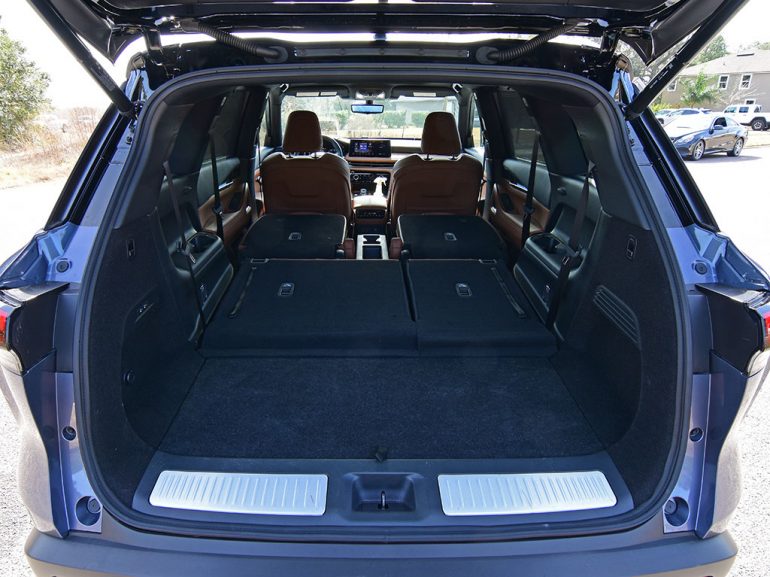 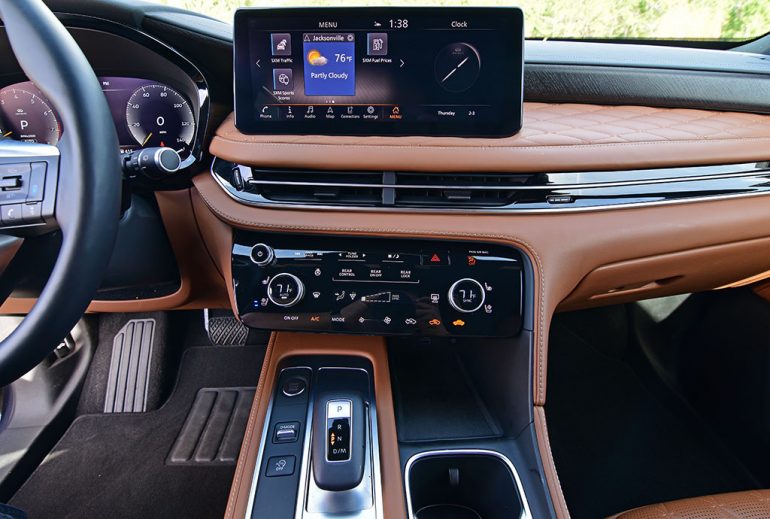 To further explain the new 2022 Infiniti QX60 giving competition a run for the money, it’s literally in the department of spending money where the QX60 excels with pricing that starts at just $46,850. My fully loaded and top trim level QX60 Autograph test vehicle comes to $63,945, including a $1,025 destination charge, which still undercuts a lot of the luxury 3-row competition in such a segment.