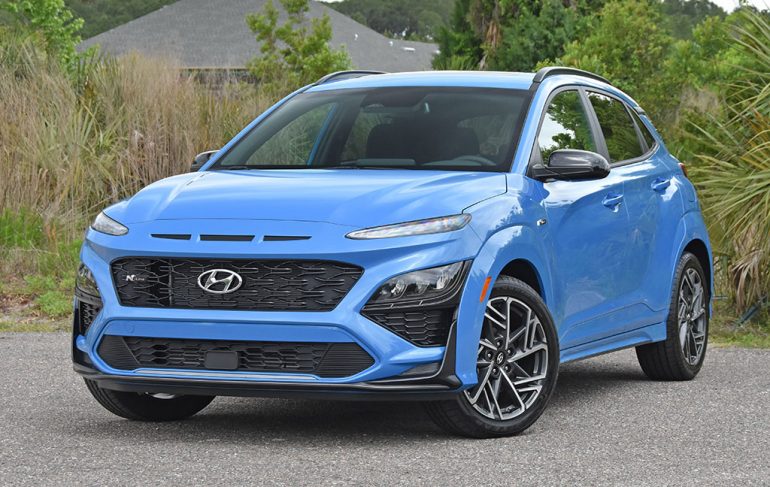 With today’s dominance of crossover utility vehicles (CUVs), manufacturers are finding creative ways to make their current lineup stand out in a crowd thus attracting a wider range of potential buyers. Hyundai has joined the bandwagon to add a new sporty appeal to additional vehicles with the Kona being one of the first CUVs to receive such treatment in a new N Line trim, which falls between the SEL and Limited trims.

The new 2022 Hyundai Kona has already been an attractive offering among sub compact crossovers and a new N Line trim it helps bridge a gap between the mid-level SEL trim and the top Limited trim. Only, the Kona N Line doesn’t do much to add any performance to what you find in the Kona Limited, which gets the same 195 horsepower and 195 lb-ft torque 1.6-liter turbocharged 4-cylinder engine. Having the 195-horsepower engine over the Kona SEL trim’s 147-horsepower is an added benefit especially when you opt for the Kona N Line front-wheel-drive model like my test vehicle. Opting for such a configuration will get much better fuel economy over the all-wheel-drive Kona N Line or Limited trim with 29 mpg city, 35 mpg highway, and a combined EPA estimate of 32 mpg. The all-wheel-drive Kona N Line or Limited trims get 27 mpg city, 32 mpg highway, and 29 mpg combined. 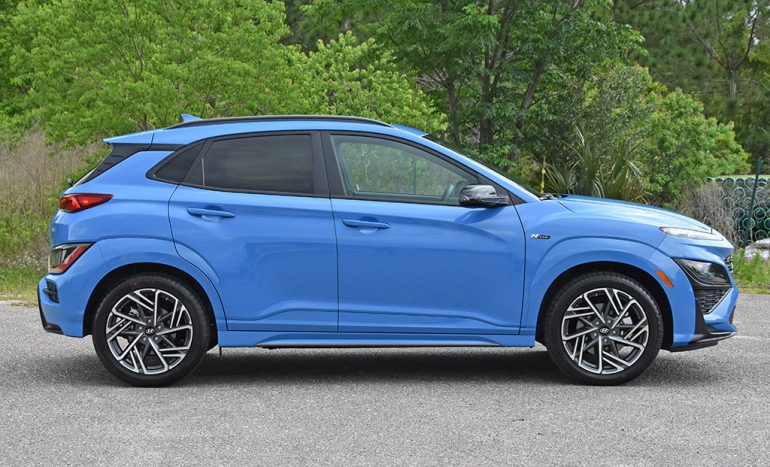 The turbocharged engine gets mated to a 7-speed automated dual-clutch transmission, which is great for the direct connection and fuel economy but can be a little unrefined when you find yourself creeping along at low speeds.

Driving the new Kona N Line is mostly a thoughtless experience until you have to navigate through heavy crawling traffic where the dual-clutch transmission shows its faults with somewhat of a jerky feeling with it engaging the automated clutch. Crawling around 5 to 10 mph isn’t exactly a fun experience if you’re not careful and soft with your throttle application. That direct connection, apart from somewhat of a lag upon initial take-off from a stop, is part of the sporty attitude in the Kona N Line. There’s ample torque that often breaks the front wheels loose upon moderate to full throttle inputs coming out of a turn at low speeds. In a way, the Kona N Line is fun and lively with its rather stiff suspension that can be a bit punishing at times. Zero to 60 mph takes about 7.4 seconds if you’re able to limit front wheel spin with traction control disabled. There’s hardly ever a lack of power through the midrange and beyond and you’ll feel plenty confident in jumping out in highway-speed traffic. 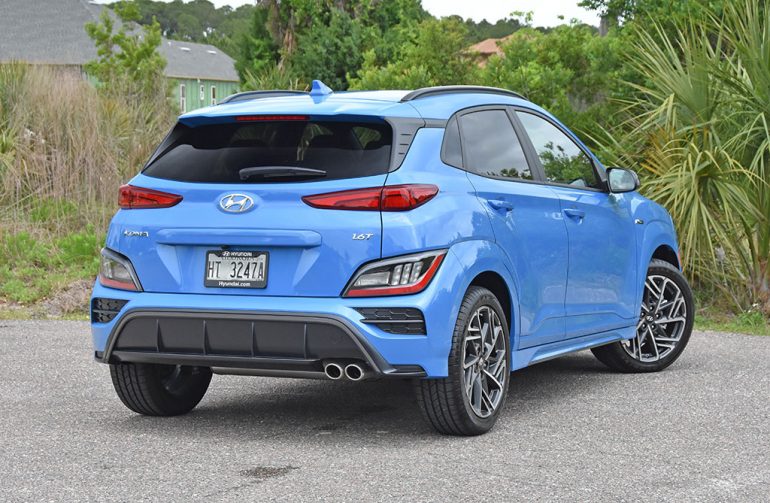 Hyundai’s “N” nomenclature is starting to be shared through a good portion of the lineup with the Kona now getting the N-treatment for both an N Line model and a full-on Kona N with even more power (276-horsepower) and a sports-tuned suspension setup. With the Kona N Line, there’s more of a sports appearance change that sets it apart from the rest of the Kona trims. As far as equipment, the Kona N Line splits the difference in the SEL and Limited trims but receives a few goodies in hopes that the N Line becomes a highly sought-after trim level, along with the more-powerful engine that’s in the Limited trim. 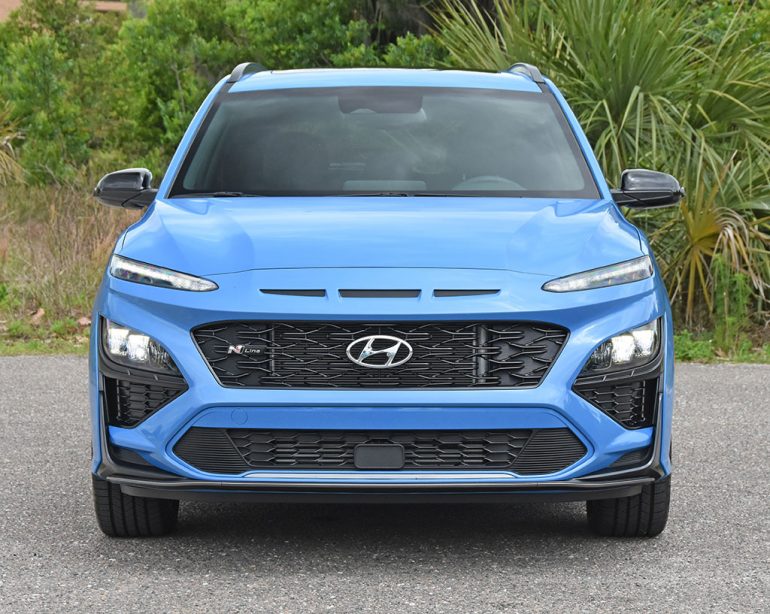 For the added equipment, the new Kona N Line not only gets the more powerful engine and virtually the same fuel economy in FWD version as the less-powerful SEL and SE trims, but it gets the highlighted add-on equipment of a 10.25-inch digital instrument cluster, larger 18-inch wheels that are unique to the trim, sporty heated front seats, and somewhat of a unique exterior appearance that makes the Kona look sportier and more premium than the two lower trims. 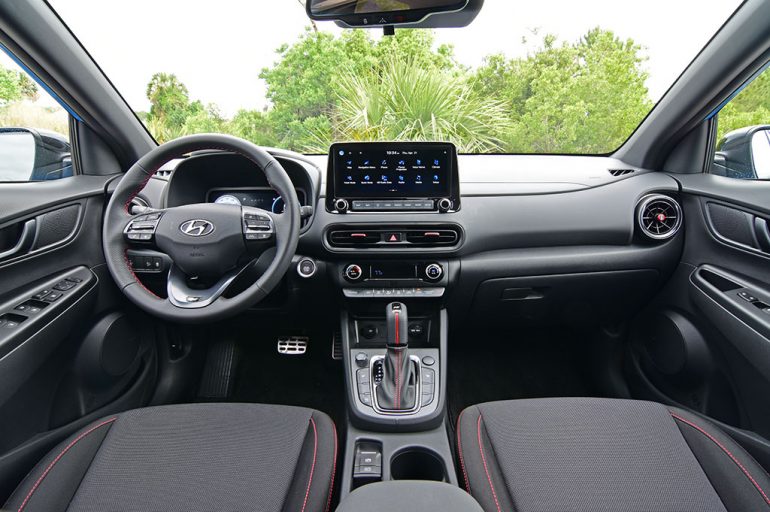 Where the appearance departs from the premium aspects is the overall interior theme where there’s nothing but hard plastics adorning the dashboard with the only soft-touch area, apart from the seats, is the center armrest. There is a neat play on the plastic trim having a texture and the large 10.25-inch infotainment touchscreen, part of the optional Tech Package, that does well to keep your attention from the plastics. The infotainment system remains to be the user-friendly setup that I’ve raved about in the past on Hyundai vehicles, and in the Kona N Line, there’s wireless Apple CarPlay and Android Auto that can also be paired through USB. 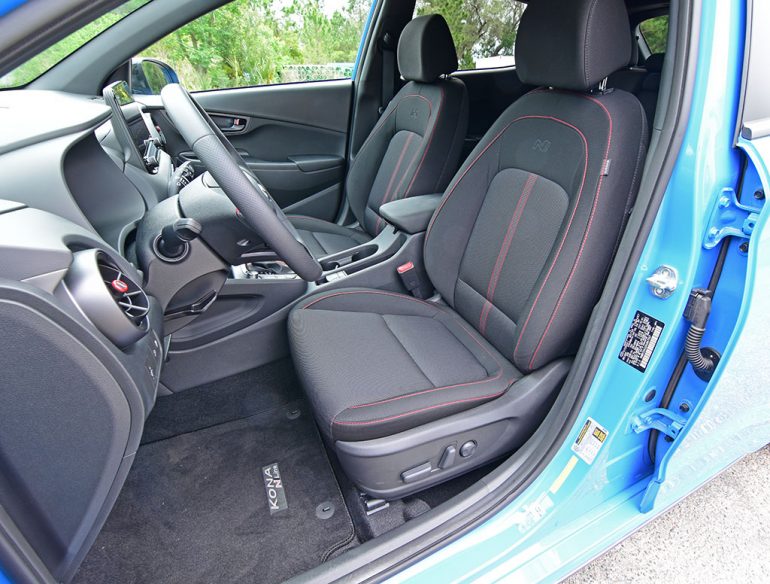 Seating areas up front are surprisingly accommodating for adults of most sizes. There’s even quite a bit of adjustability in the power driver’s seat. The rear seating is a little cramped but provides just enough space for either two adults or three smaller kids. The 60/40-split seatbacks can fold down to open up the 19.2 cubic feet of storage behind the rear seats to 45.8 cubic feet. 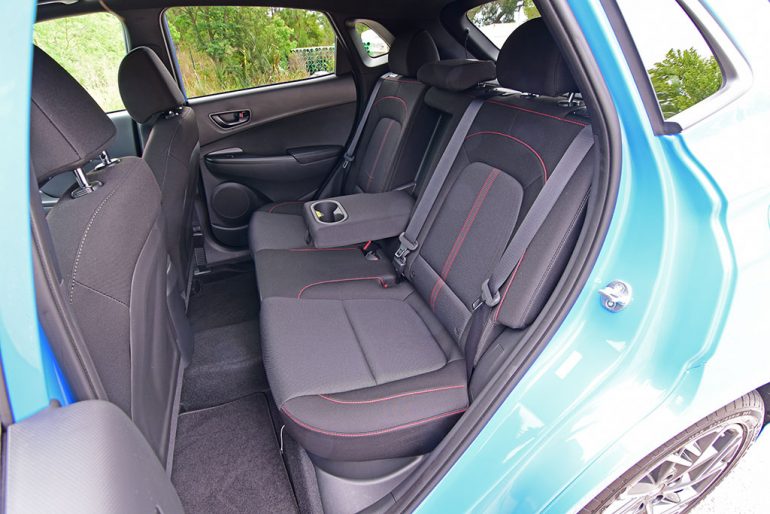 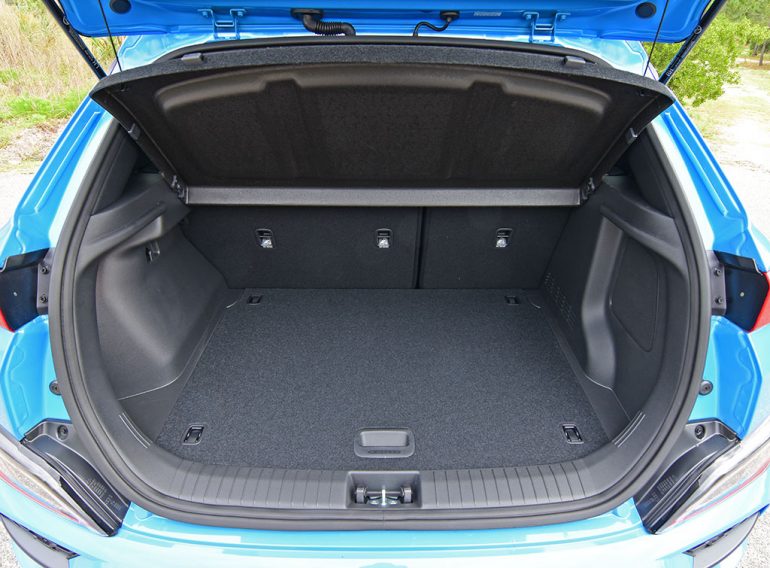 The Hyundai Kona gets a few standard active safety features including forward collision warning and mitigation, lane departure mitigation, and lane-keeping assist. On the Kona SEL trim and N Line trim you get the addition of a blind-spot monitor and rear cross-traffic alert. 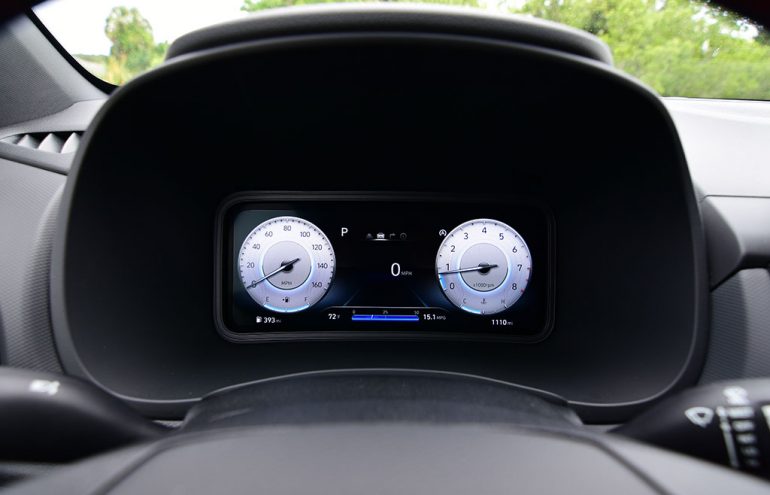 Hyundai’s quest to keep its products relevant and a little different from the rest of the crowd is paying off well, especially with the additions of new N Line and sporty performance-oriented N vehicles. The Kona N-Line is just one more move that keeps the brand fresh among younger crowds and those small growing families that want something to stand out instead of sticking with the typical vanilla crowd of crossovers. With such, pricing remains to be respectable starting at just $21,300 before any fees. My Kona N Line test vehicle in a front-wheel-drive configuration painted in an eye-turning Blue Wave color comes to $29,790, including a $1,245 freight and handling charge.