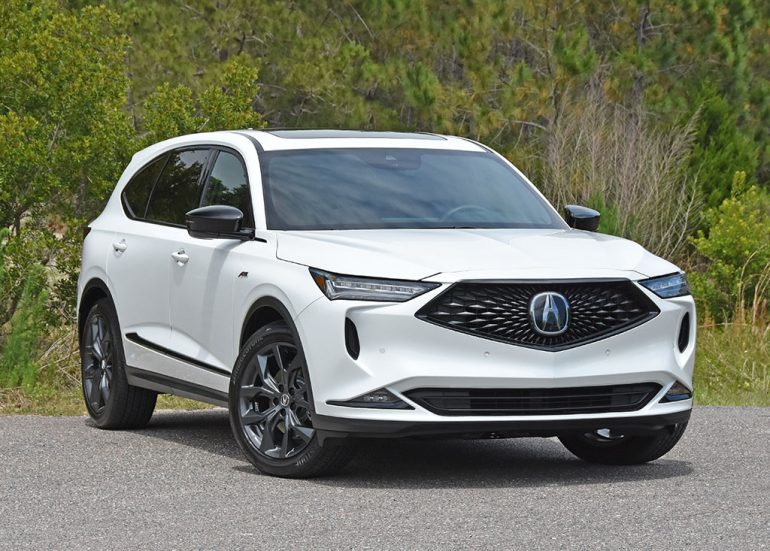 The Acura MDX has long been a trend-setter for the mainstream three-row luxury crossover segment, and it continues to retain such a place with the newly redesigned fourth-generation bringing us additional trims and a new powertrain option.

The new 2022 Acura MDX embarks on a newfound journey where it must keep its place to win over those who have grown to love the straightforward approach of a three-row luxury crossover that thrives off its pleasing design and respectable price point. For the 2022 model year, Acura brings us a fresh redesign but one that doesn’t depart too far from its roots that have worked well to be firmly planted in the American family lifestyle. The new sleek design uses the design language found in other new Acura vehicles and plays well for some unique attributes as to not get too lost in translation when you find an abundance of such vehicles in American suburbs. 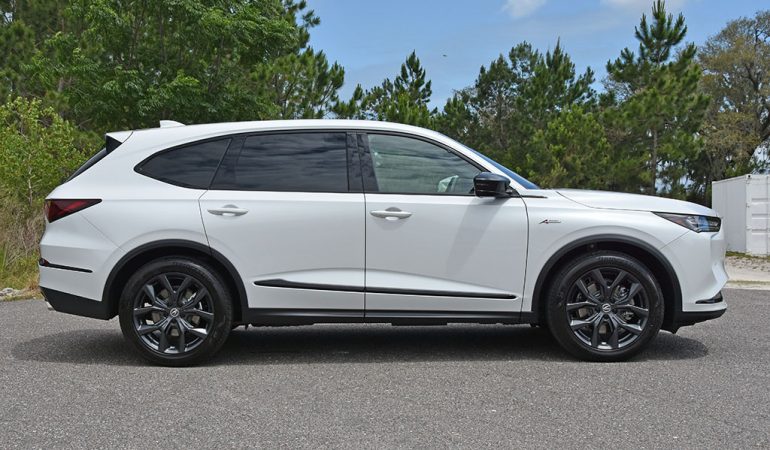 Powering the new Acura MDX is a choice of two engines, a return of the standard 3.5-liter V6 with 290 horsepower and 267 pound-feet of torque found in my MDX SH-AWD A-Spec test vehicle, or a more powerful 3.0-liter turbocharged V6 with 355 horsepower and 354 pound-feet of torque reserved for the top Type S or Type S Advance trims. Both engines get mated to a 10-speed automatic transmission where all trims but the two base MDX and Technology trims get the SH-AWD (Super Handling All-wheel-drive) system as standard. The two base trims have the availability to add the SH-AWD system. The Sport Hybrid setup is no longer available. 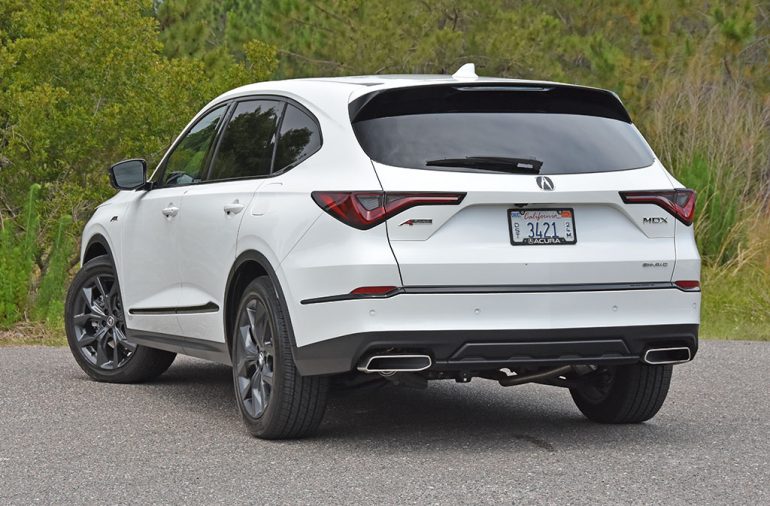 Out on the road, the new Acura MDX in the mid-level SH-AWD A-Spec trim is a smooth operator. I would even go as far as to say it lacks the sportiness to match its sporty looks when you opt for the SH-AWD A-Spec trim of my test vehicle. The suspension, which incorporates adaptive dampers, is mostly soft even if you enable the Sport drive mode or opt for the firmer damper setting within the customizable individual drive mode. There is only a subtle change from the Comfort and Normal drive modes to Sport in the way the MDX feels and handles. Otherwise, the most noticeable change in Sport mode is the transmission’s shift points, throttle positioning, and a little added weightiness to the steering effort.

The MDX SH-AWD A-Spec is certainly tuned more to the luxury side of things and sometimes feels a bit strained for getting up to speed. The 290 horsepower may feel a bit taxed as the 10-speed automatic transmission also feels a little lax to shift and often finds itself continually downshifting even when you cruise around 60 mph. Basically, there’s a slight deficiency of power where the engine simply does not want to keep pace in the higher gearing requiring the transmission to stay out of 10th or 9th gear around 60 mph. To get to 60 mph it takes about 6.4 seconds, which is decent. However, the more powerful MDX Type S will cover ground a lot quicker to hit 60 mph from a standstill in just 5.5 seconds. 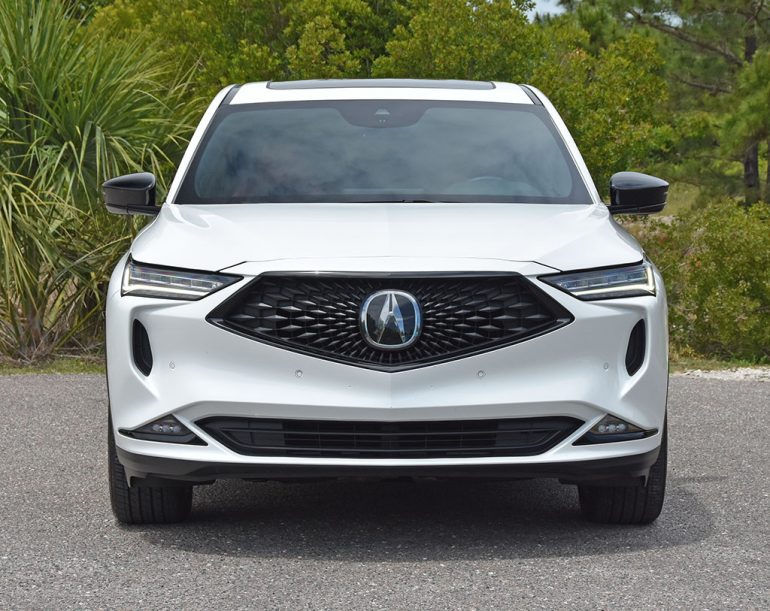 Overall, the dynamics of the MDX are good but you tend to feel the mass and weight of the vehicle when you start to navigate through aggressive bends in the road. Otherwise, the ride quality is really good and compliant enough to keep the body in check as the suspension does well to soak up road imperfections and keep up to seven occupants happy.

The interior of the Acura MDX is inviting and has the proper soft-touch surfaces along with accented stitching and a nice contrast of colors for a luxury-appointed crossover. Acura elevates the sporty appeal of the interior in the A-Spec trim with the features of my test vehicle’s heated and ventilated red perforated leather front seats with an Ultrasuede trim, a sporty flat-bottom steering wheel with paddle shifters, and metal pedals. The front seating area is roomy with a good amount of seat travel. If you do opt for the Type S trims you get a front massaging seat feature, another first for the MDX to help retain its luxury position. 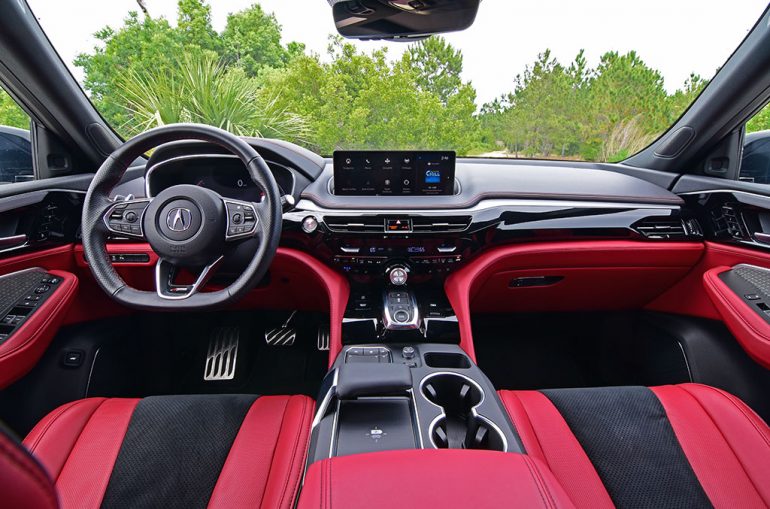 The second and third-row seats also get a sporty treatment and have accommodating areas, something that’s kept the MDX at the top of the hill for a desirable midsized three-row luxury crossover. The second row of seats features the ability to slide forward and back, recline, and convert the center seat into an elongated cupholder console when folded down, or you can completely remove the center seat. The third row of seats makes room for two adults, but legroom is cut short unless you adjust the second-row seats all the way forward of their travel. Accessing the third row is made simple through a touch of a button where the outboard second-row seats perform a pneumatic action to quickly move out of the way. The second and third row seats don’t seem to fit the luxury theme of the MDX but prove to be accommodating for most needs in such a 3-row midsized vehicle. 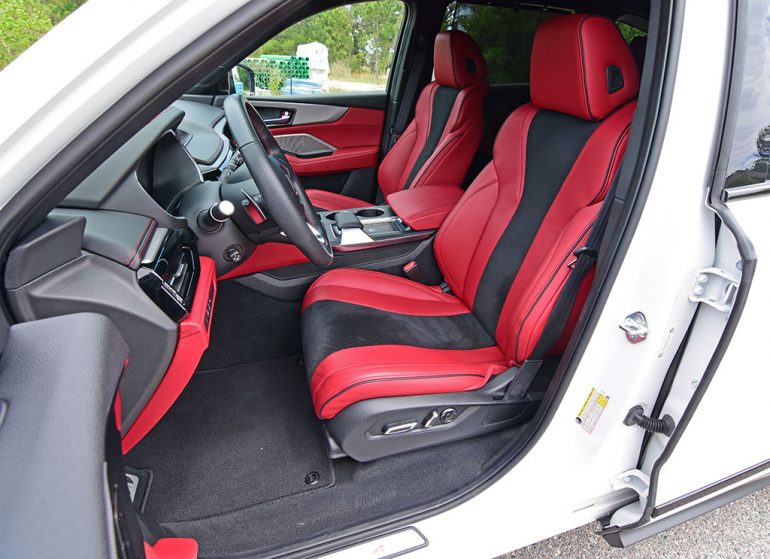 The new Acura MDX retains the brand’s tradition of how it thinks the driver or passenger should interact with its infotainment system, which is now fed through a 12.3-inch screen. Here, I think Acura could have made a change for a more user-friendly interface instead of continuing to use the True Touchpad Interface, which limits you to using a trackpad instead of a touchscreen. The system isn’t as bad as what you find in the Lexus’ remote touchpad system but there is a learning curve and required patience involved that often takes too much focus off of the road in my opinion. However, there is a neat play on positioning a neat padded resting pad that floats over the wireless charger. The floating pad serves as a nice ergonomic addition to make use of the trackpad a little easier and natural with your hand placement. The latest infotainment system is a decent setup with its menus and controls once you become accustomed to using the trackpad. Still, Acura could have done better by just moving the large screen a little closer and making it a touchscreen.

The gauge cluster is now a fully digital setup, a first for Acura. The Precision Cockpit, as Acura calls it, has a clear straightforward display with only two customized display designs to choose from. There are several information readouts available for vehicle information and settings but outside of such, there isn’t anything groundbreaking to be displayed on the cluster as found on other luxury vehicles. 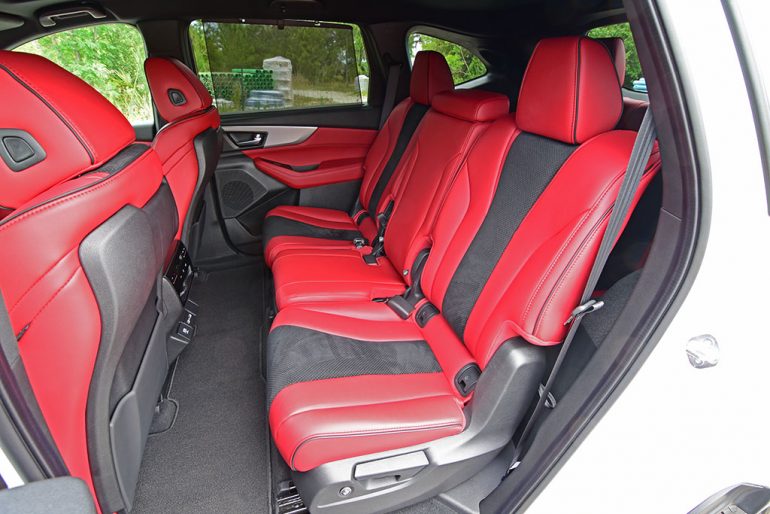 I do find that there is a smart use of space in the center console of the dash with the one exception of the Dynamic Mode dial for changing the drive modes. The dial continues to be unnecessarily huge. The other aspects of the dash include plentiful physical buttons for the three-zone automatic climate control and a neat pop-up USB port pod with one traditional USB and one USB-C port. 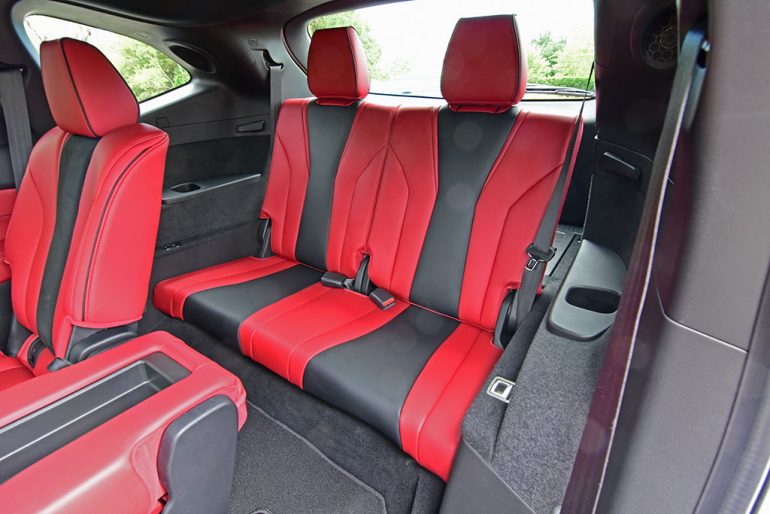 The fuel consumption of the Acura MDX continues to be consistent and matches that of the EPA estimates of 19 mpg city, 25 mpg highway, and 21 mpg combined. I feel these numbers could be a little better considering the power output. However, the fuel consumption numbers of the MDX A-Spec or other trims using the 3.5-liter V6 are much better than the Type S’ 17 mpg city and 21 mpg highway figures. 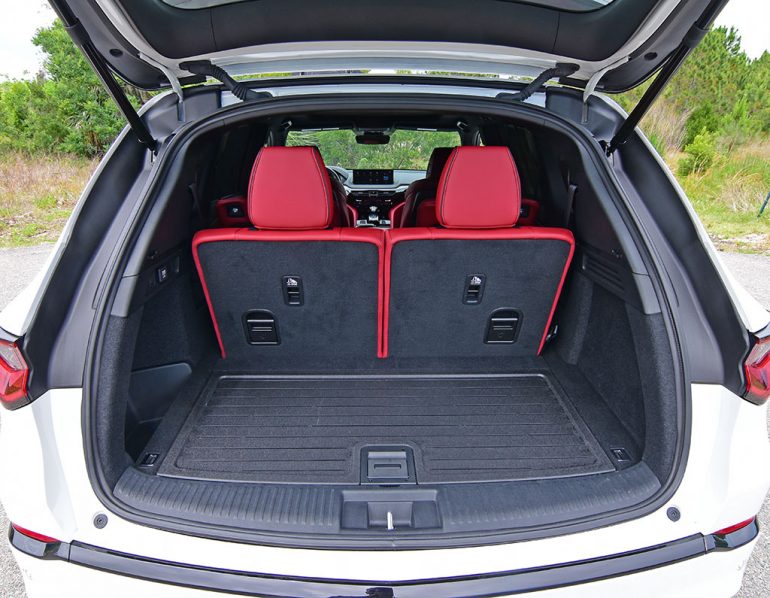 The expected active safety features are blanketed in the MDX and are all included across all trim levels, which includes adaptive cruise control with low-speed follow, lane-keeping assist, road departure mitigation, traffic jam assist, traffic sign recognition, blind-spot monitor, forward collision warning with emergency braking, and advanced pedestrian detection. The only safety feature that changes with the upper-level trims is a 360-degree camera system which only comes on the Advanced Package or Type S Advance trims, which is rather a shame because many non-luxury crossovers include such tech in place of the standard review camera found on my test vehicle. 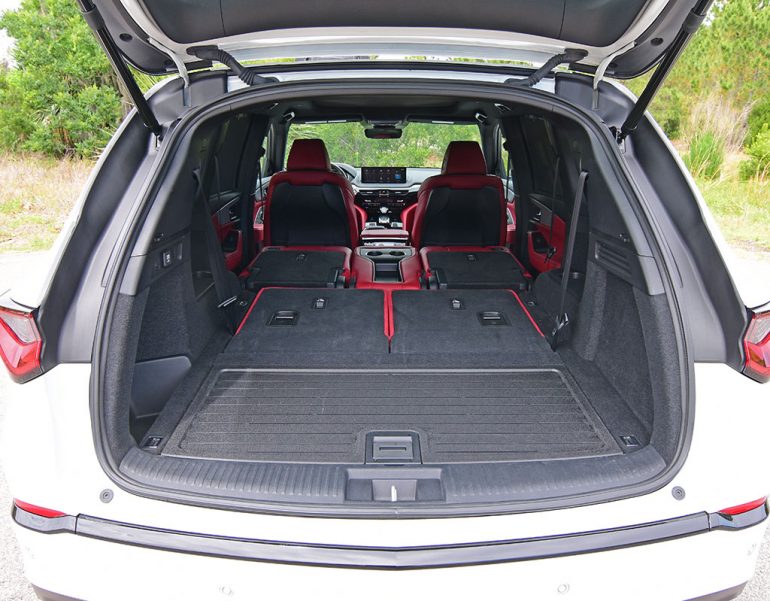 Part of the appeal and class-leading sales of the Acura MDX was its value proposition over the many years of its existence. Now, the MDX slightly expands on its luxury horizon but still can be had for a respectable price starting at $48,000 for the base FWD trim. With six preconfigured trim levels for the redesigned 2022 model year, the MDX’s pricing structure expands greatly with the top-level Types S Advance trim coming in at $72,050 before any additional fees. My mid-level MDX SH-AWD A-Spec trim test vehicle comes to $57,100 before any fees.

The 2022 Acura MDX has its work cut out to keep its position as one of the top sellers for its segment, but with the expanded trims and new luxury features, there’s a good chance it will remain at or near the top.