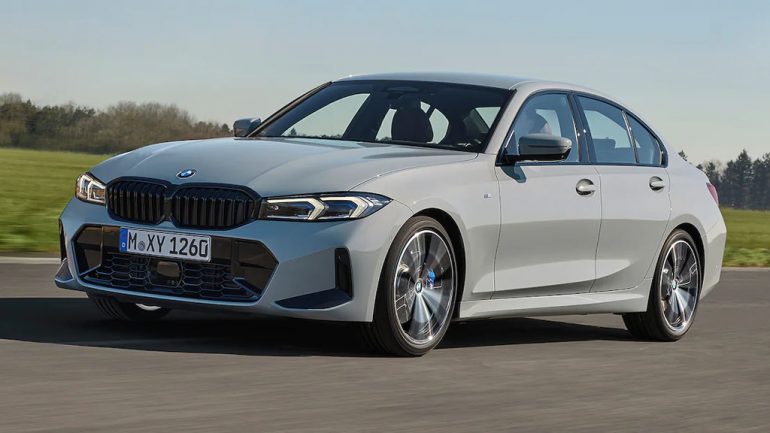 The BMW 3 Series has undoubtedly been a benchmark for the luxury compact sports sedan segment for nearly as long as it has been in existence. To keep the 3 Series a trend-setter, BMW updates it slightly for the 2023 model year taking on a sportier approach that turns out to work much better than the controversial styling of the elongated grille belonging to the new 4 Series along with the new M3 and M4. Thankfully, the new 2023 BMW 3 Series retains “good looks” for its grille design and overall fits the mold of what we think BMW should consider inspiring other models.

Whether BMW listens to us or not, they’ve done justice to the new 2023 3 Series to not upset their base. Hopefully, they take note and make some changes to the 4 Series, M3, and M4 – because we’d certainly buy one right now if those looked anything like this stunningly gorgeous 2023 3 Series up front! 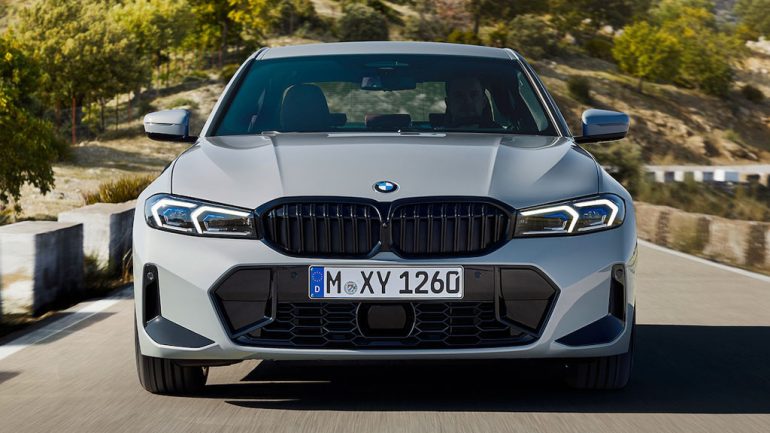 Getting off our soapbox, the new 2023 3 Series embodies a rather conservative approach to not mess up a good thing considering the 3 recently sold more units than it has ever sold. There are some characteristics of the new design that does away with the outgoing model’s nod to the E46 3 Series where you saw little notches in the undersides of the LED headlights. Now, the 2023 3 Series has an opposite design for the new slimmer LED headlights where the running LEDs run atop the bezel instead of below. Other traits of the front facia include a larger darkened lower grille area and a Shadowline darkened kidney grille for a more aggressive look that comes standard with a satin aluminum trimmed grille now being an available feature. 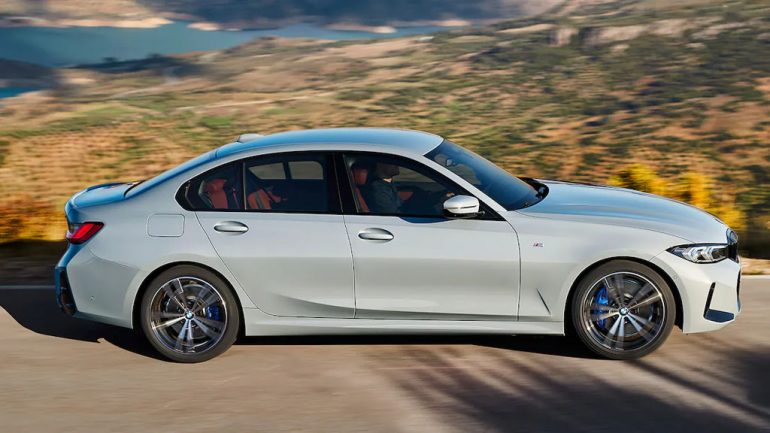 There are reworked rear bumpers as well with a large rear diffuser and a body-colored rear spoiler for the M Sport Package option. The M Sport Package is available for the 330i and 330e trims and features 19-inch lightweight alloy wheels, the larger diffuser, variable sport steering, and the availability of either the M Sport Suspension or Adaptive M Suspension. 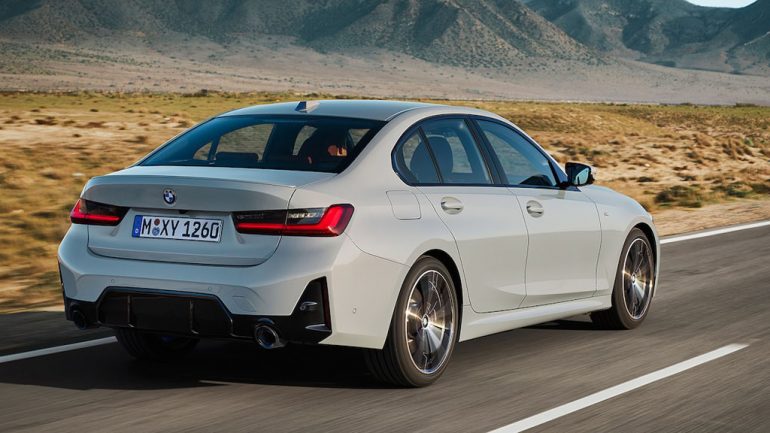 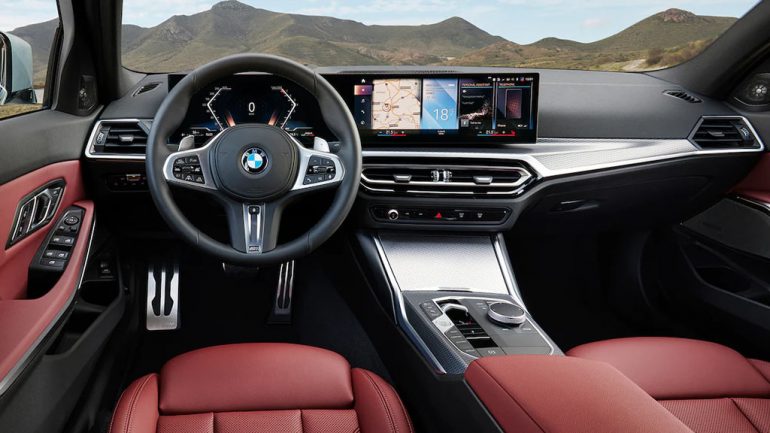 Inside of the new 2023 3 Series is an updated cabin to fit the mold of what we’re seeing in other updated BMWs, which feature a new 14.9-inch touchscreen running the latest BMW iDrive 8 software that slightly curves into the driver’s gauge cluster, which is a 12.3-inch digital display. Using the new iDrive 8 system there are new voice-activated features that allow control over a wider range of items, including the ability to raise or lower windows and even open the sunroof. A 5G mobile hotspot is available allowing connection for up to 10 devices. 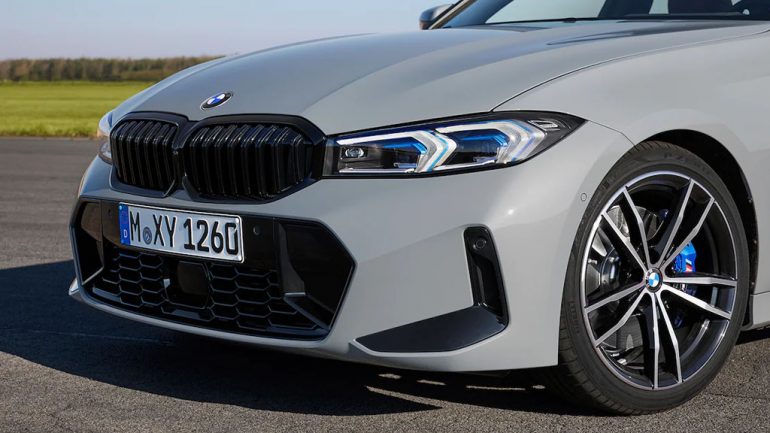 There will be a wider gamut of color selections including Individual Frozen Pure Gray and Frozen Tanzanite Blue. Inside you will be able to also get M-colored stitching for the seatbelts for unique touches to elevate the character of the 3 Series. 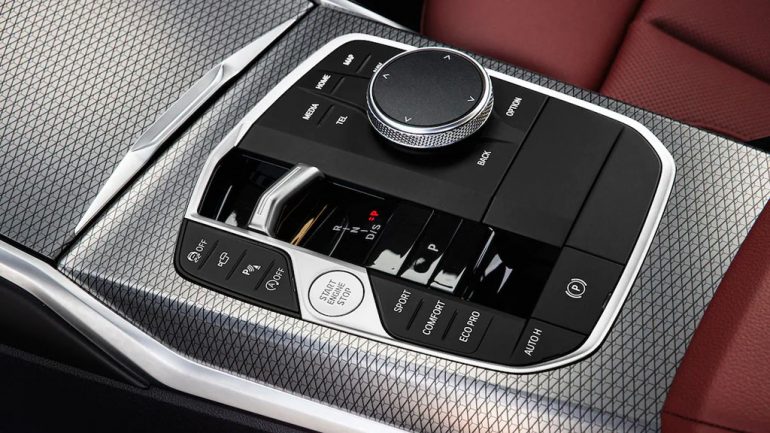 We expect pricing to be slightly higher but nothing that would sway potential buyers. The new 2023 BMW 3 Series will be built in the new BMW Mexico plant and in the U.S. for the American market and launch in July of this year.