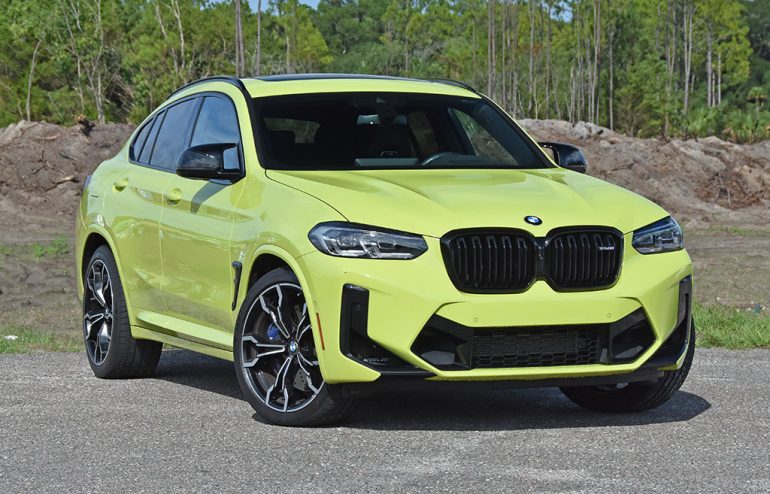 In today’s automotive landscape, SUVs and compact crossovers tend to be highly sought-after vehicles over coupes and sedans. BMW’s X3 and X4 compact crossovers have benefited from the popularity of such vehicles and on the performance edge of things the latest X4 M has risen to become quite the sleeper with its stunning performance that many didn’t see coming in the realm of BMW “M” Motorsport vehicles.

The 2022 BMW X4 M Competition is a star within the brand that is eager to take on sports cars that are nearly twice its price and do it all while offering the versatility of a crossover. However, that versatility of a crossover is somewhat cut short by the X4 M’s unique coupe-like styling from its sloping rear roof design that’s taken the X3 and fundamentally sloped the rear roof area. While such a style may be an acquired taste for some, you must respect the boldness of automakers who want their crossovers to stand out more – and THIS X4 M Competition test vehicle adorned in its Sao Paulo Yellow paint does just that, stand out in a crowd. Thankfully, BMW retained the good looks of the respected kidney grille up front matching the darkened trim, lower grille, staggered 20-inch wheels, and large rear defuser area. The X4 M Competition looks the part of a menacing crossover and I think it’s the best the X4 has ever looked. 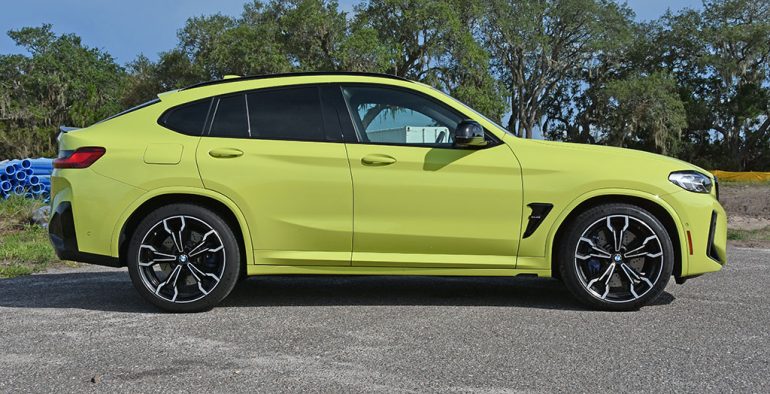 After all the years of experiencing BMW vehicles, I’m not at all surprised to jump in one and it immediately feels faster than BMW originally claims. The new BMW X4 M Competition is no different, which has an additional 30 horsepower and 16 lb-ft of torque over the non-Competition X4 M giving its turbocharged inline-6-cylinder engine 503 horsepower and 479 lb-ft of torque, which feels like much more. With the direct and snappy-shifting ZF-sourced 8-speed automatic transmission set in its fastest and most aggressive shift mode and launch control enacted by disabling the stability and traction control, the X4 M Competition is able to hit 60 mph in just 3.3 seconds. Yes, that’s very fast and much quicker than BMW estimates. The xDrive all-wheel-drive system tends to bias its power to the rear but don’t be surprised that the front wheels break loose a bit when launching. 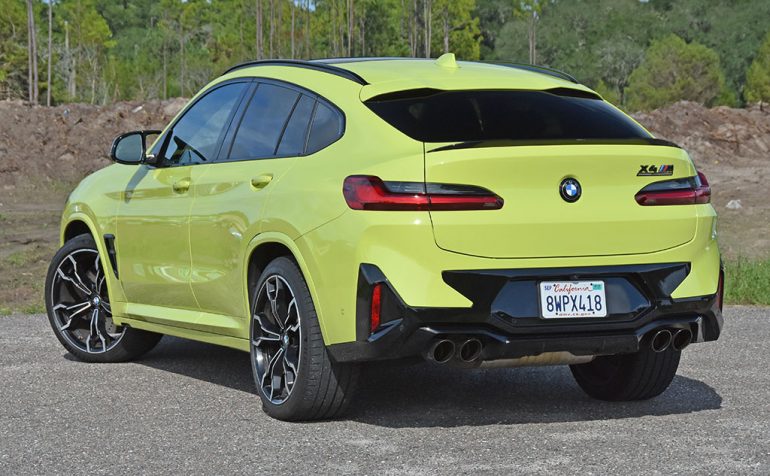 As the shifts fire off nearly like some of the best dual-clutch transmissions around, the X4 M Competition lurches forward with authority and hardly any drama. Put the unique crossover into a sharp turn and it grips like it’s nearly on rails feeling almost like a well-tuned sports coupe. There’s a hit of turbo lag from a stop when you don’t use the launch mode, which wants you to allow the engine to build boost to avoid that uninspiring turbo lag.

Where I found fault with the new X4 M Competition is its twitchy feeling in the ride quality and steering sharpness, which is somewhat different from the non-Competition X4 M. While the steering is quite sharp it tends to be followed up with unwanted twitches in body movements where it feels like the front wheels need a toe-in adjustment. The suspension aided by adaptive dampers that have three settings that can be dialed up through a few different ways, one being through one of the two M steering wheel buttons, tends to be lax in its reaction to dips and rises in the road. Basically, the suspension is initially stiff but creates somewhat of a lofty feeling at times jarring any rear passengers. I feel BMW could easily do some retuning here and “fix” such a feeling. 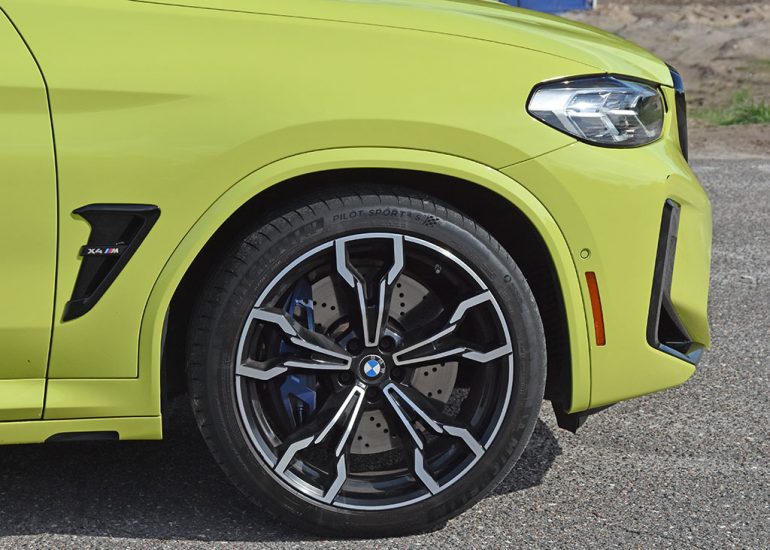 The BMW X4 M Competition nearly defies the laws of physics where you feel as if you can push it harder and harder to inch up to its limit. Even the braking from large 15.6-inch cross-drilled rotors clamped down by 4-piston calipers up front and 14.6-inch discs with single-piston calipers out back is strong and confident inspiring. In being part of the true M vehicle pedigree, the X4 M Competition is poised and ready for track duties just like its closely-matched M3/M4 siblings – only the X4 M Comp has a bit more weight and stature to contend with but adds the extra room and dash of practicality in a singular package. 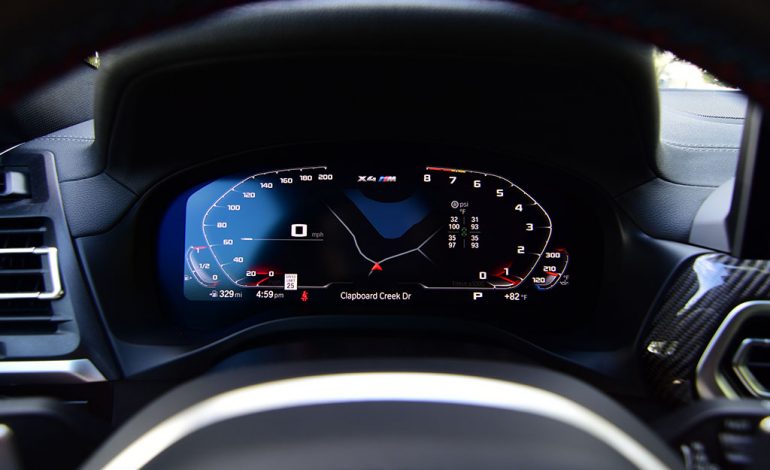 The BMW X4 M Competition, just like many other BMWs, has a consistent rate of burning fuel when you’re not pushing it hard. Doing such, you’ll expect to easily match the EPA estimates of 15 mpg city, 20 mpg highway, and 17 mpg combined. On the highway, you may even best the figure to get nearly 21.5 mpg as I did traveling at the posted 70 mph speed limit. 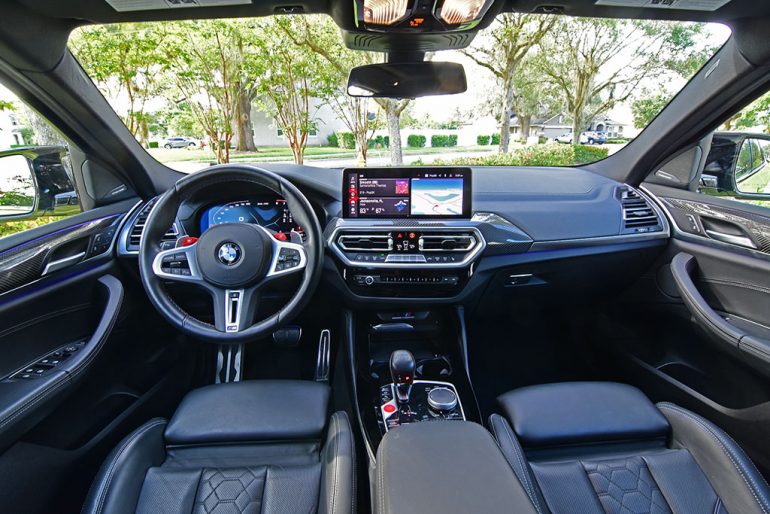 The cabin of the X4 M Competition is most of what you find in many other current BMW vehicles before the recent iDrive update. Using the iDrive 7 setup and the welcomed touchscreen and redundancy of controls is mostly a simple endeavor with a short learning curve. I can respect what BMW has done in their very last iteration of iDrive 7 before moving to the new iDrive 8 setup that I recently encountered in my BMW i4 review. 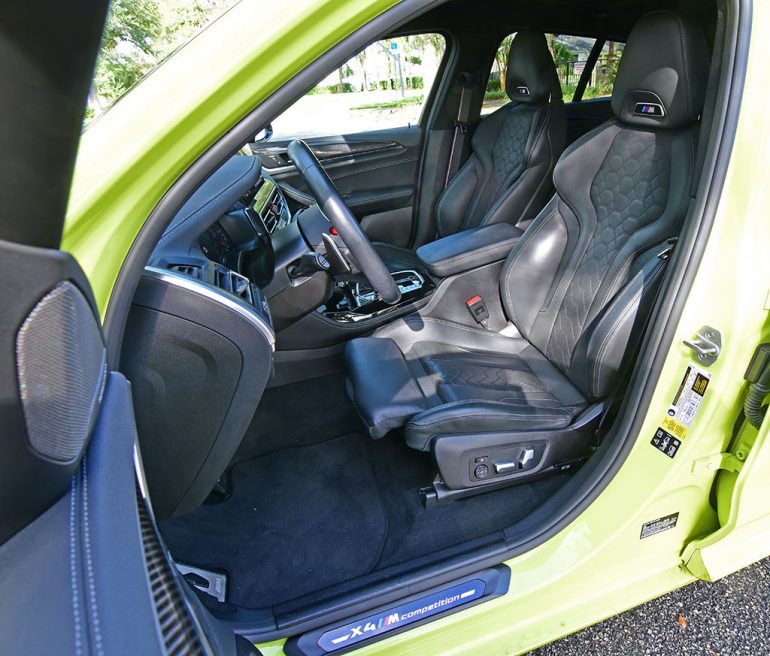 There’s wireless Apple CarPlay and Android Auto integration along with the traditional simple controls that many have grown to enjoy in modern BMW vehicles. Otherwise, the BMW X4 M Competition adds some unique heated front seats that have good bolster support and the proper power adjustments including a versatile lumbar adjustment. The rear seating area is small and there’s not much headroom mostly due to the sloping rear roofline, which also contributes to a smaller rear window. Rearward visibility is still “okay” but not as good as you find in platforming sharing X3/X3 M. The same goes for cargo space being cut a little short from the sloping rear accessed by a power liftgate. 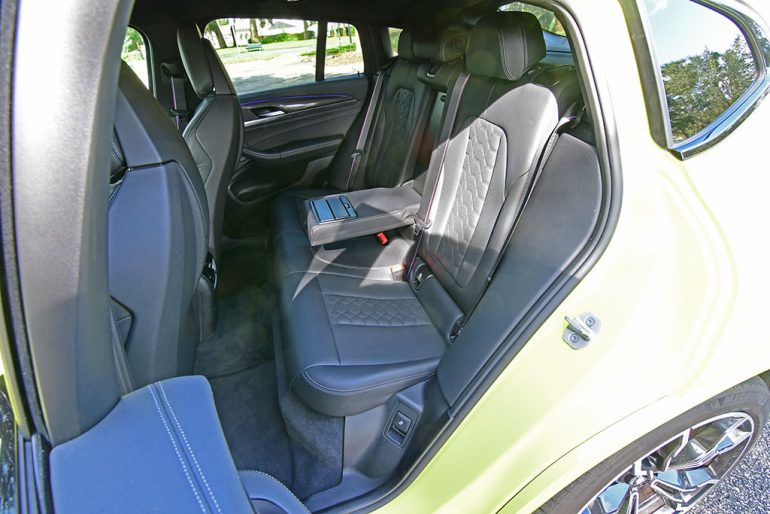 There’s a decent list of expected active safety features that come standard in the X4 M Competition (blind-spot monitors, front collision warning with emergency braking, and a high-resolution 360-degree camera system). There’s the option of adding the adaptive cruise control setup, and lane departure warning/mitigation, which was not equipped in my test vehicle. 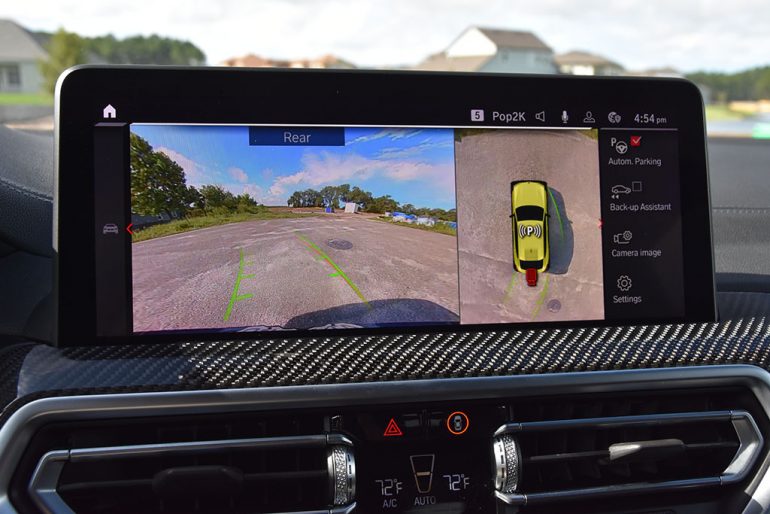 The BMW X4 M starts at $73,400 before any fees or options. The pay-to-play factor comes into the picture with the BMW X4 M Competition where the pricing tends to easily crest $80K with just a couple of option packages whereas my nicely equipped test vehicle comes to a price of $86,145. For a compact luxury-performance crossover, the X4 M Competition is among the best in its class in my opinion with shocking performance that leads the pack.