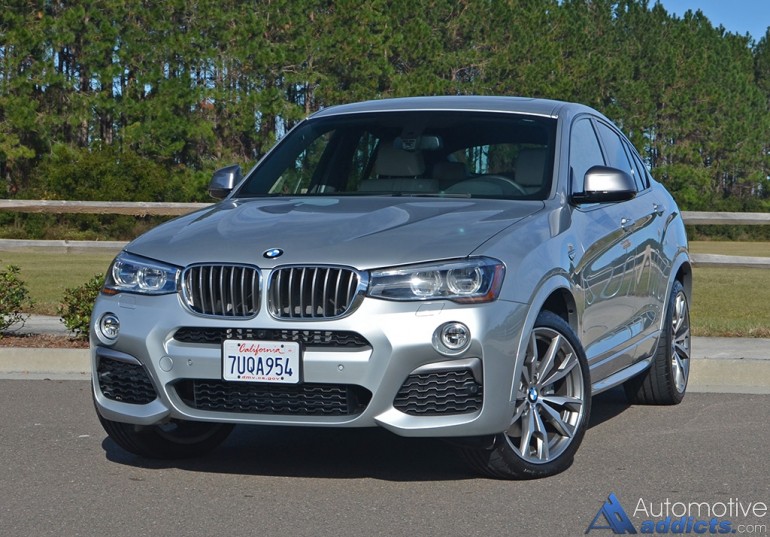 In a world of anything goes, BMW comes to mind quite often to fill the small gaps between their vehicle line with Coupe-like creations based off of well-suited models only to offer something different and unique to the masses. With such a concept, BMW introduced a new X4 M40i for the 2016 model year building upon the basis of the X4 crossover that was first introduced as a swooping coupe-styled variation of the X3 in 2015. The quest of conjuring up a something a little spicier than what the X3 luxury SAV (Sports Activity Vehicle) had to offer, the new X4 M40i gets a bit of extra performance treatment with the joys of 355 horsepower and 343 lb-ft of torque from its forced-induction N55 inline six cylinder engine. 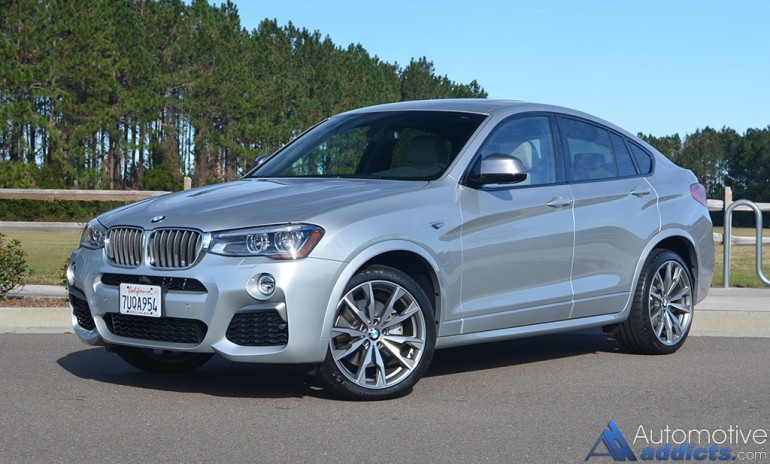 Setting their crosshairs on vehicles like the Audi SQ5 and forthcoming Mercedes-AMG GLC 43 Coupe, BMW has derived their latest X4 entrant into the new-age-constructed crossover coupe segment. When the word “sport” brings about a little extra enthusiasm in many areas of a vehicle’s ability to claw at the pavement, the new BMW X4 M40i has its merit to do just that and some. In my recent time with the 2017 BMW X4 M40i, I couldn’t help but think that all of the passerby BMW enthusiasts would label me as a poser, one who splurged almost $40 to slap a ///M badge on the back of my new X4. No, it wasn’t just a badge slap – but more of a hodgepodge Frankenstein creation out of the parts bin belonging to BMW’s Motorsports outfit. The BMW X4 M40i harkens to what the M235i was in getting something a notch above an M-packaged vehicle but not true to the form of a real M vehicle like the M3, M5 or even the X5 M and X6 M. But does it really matter? Let’s sift through the details. 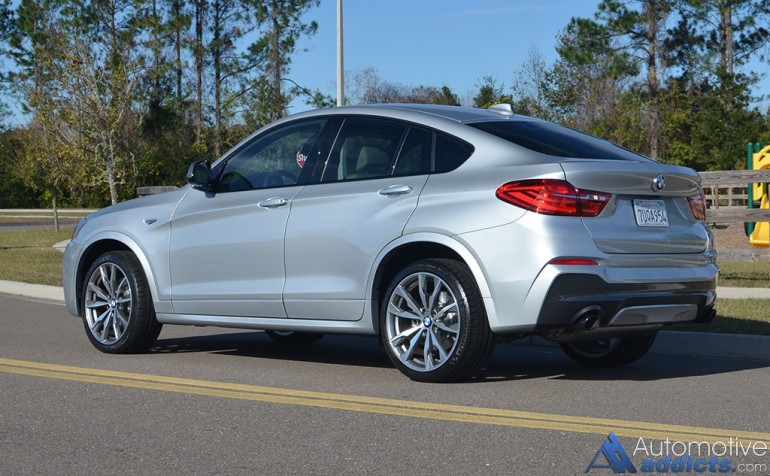 The new BMW X4 M40i borrows a bit from its M nomenclature brethren in its N55-powered turbocharged inline 6-cylinder engine. Though, in the case of the X4 M40i, the thrusting and substance-derived engine gets mated to a direct-feeling 8-speed automatic, a snappy-shifting well praised unit sourced from ZF, who happen be at the upper echelon of creating performance-oriented automotive gearing. The combination makes for a harmonious thrill ride capable of running to 60 mph from a standstill in just 4.7 seconds. Making things even better, despite its hefty-for-its-size curb weight of 4,235 pounds, the X4 M40i drives and feels lighter than it is. 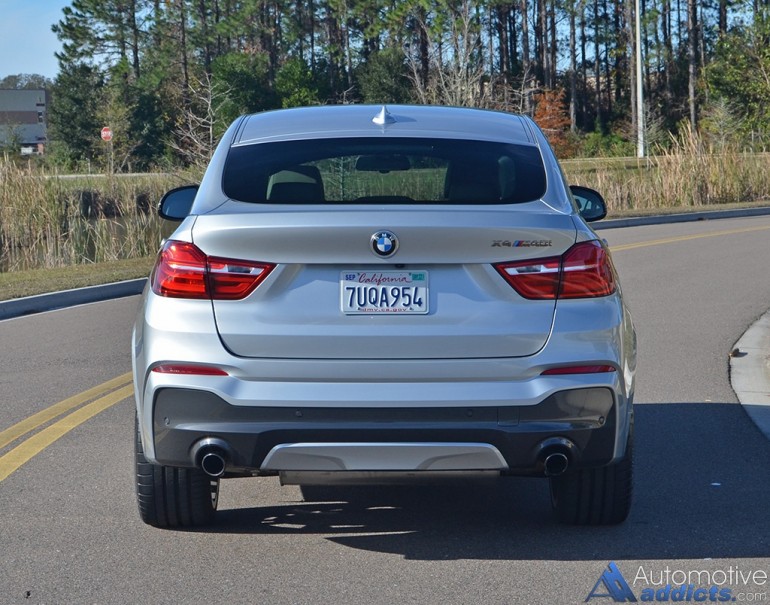 With crossover vehicles making record sales as of late, the introduction for something exceptionally sporty and performance oriented within the compact luxury mold of crossovers, the X4 M40i is a welcomed addition. One could argue that the X4’s body lines aren’t sexy or even digestible among onlookers. Here, I can’t argue the case as the X4 M40i’s looks don’t quite sit well with me either. Regardless, the X4 M40i has the performance chops to help you forget about its cheeky style, a style that almost makes the Pontiac Aztek look appetizing. The X4 M40i has delicious style in the way that you put your foot down. Thanks to its savvy all-wheel-drive system the X4 M40i goes around corners like a pro, it darts out into traffic like you would expect any BMW driver to do, it even brakes like a champ at nearly any speed under its governed 150 mph top speed. To sum up the performance of the X4 M40i, it took me by surprise and inspired a taste of what you get in M vehicles from BMW. 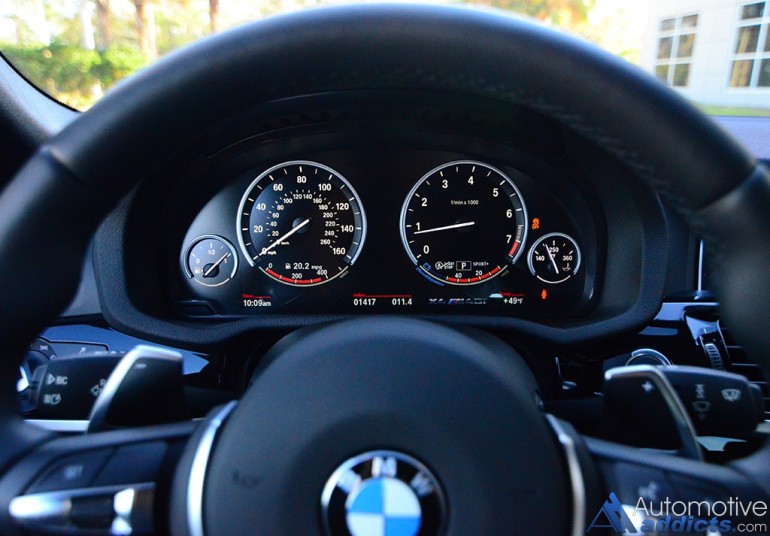 The economical side of the BMW X4 M40i is hidden underneath its Eco Pro drive mode, which does its best to conserve fuel using virtually none when you lift off of the throttle or coast. The throttle mapping is changed to a subdued state, much of the opposite of the Sport and Sport+ drive modes, which stiffen up the dampers, add weight to the electric steering rack, and change the 8-speed automatic transmission shift patterns. The EPA estimates for the new BMW X4 M40i come in at 19 mpg city, and 26 mpg, which are both easily attainable as I saw during my time with the hot-rodded crossover.

BMW has been one to garnish many models with a different design, one that takes a new approach to battle what Mercedes-Benz has nearly perfected in their coupe-like designs on vehicles that retain 4-doors. While calling a 4-door a coupe is never a good thing until you get to see it in person, the BMW X4 is one that will have to continue to grow on me for its unique design. Apart from the exterior, the interior of the X4 M40i is mostly agreeable and stays to the course of what you expect in a small crossover, sans a bit rear interior volume. There is one big exception to the utility vehicle rule, which remains to be the X4’s Achilles heel, and that lies within the reduced cargo room and seating in the rear. Due to the X4’s roofline, which slants down to give it a coupe-like sleek look, the seat bottoms are lowered, and the cargo capacity is somewhat compromised when compared to its closely related and tall-statured X3 sibling. Moreover, rear visibility is reduced, which, thanks to the addition of a 360-degree camera system, you can still manage to easily park the X4 M40i or back into tight spaces without the fear of limited visibility out of the massively slanted rear window. 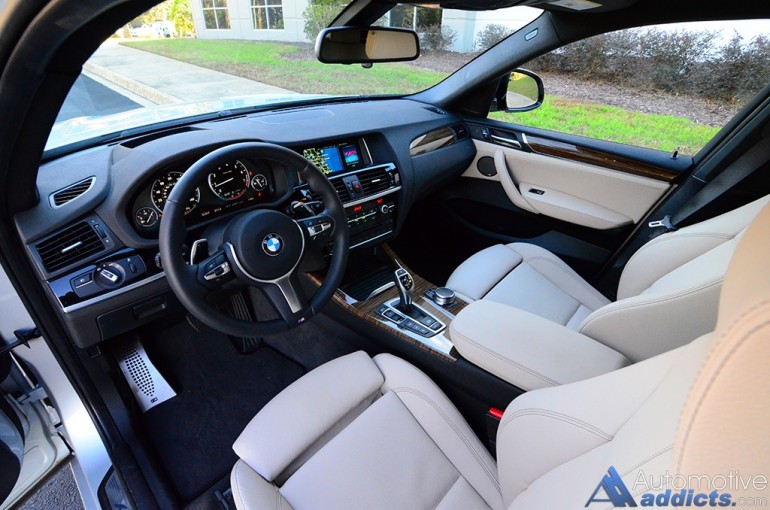 The cabin of the BMW X4 M40i mostly mimics that of the BMW X3 and the other X4 trim levels. Where the X4 M40i attempts to differentiate itself is the updated and beefy heated M steering wheel. New for the 2017 model year in the X4 M40i is a welcomed and updated iDrive system that attempts to simplify many of the features and menu sets where they are bundled into a somewhat of a home screen. The system also has a few updated graphics and button arrangement as to consolidate many of the entertainment and navigation functions. I found the system to still have several deep menus but proved to be somewhat more user-friendly for quickly accessing the core features. The availability of a Wi-Fi hotspot and wireless phone charging are also a welcomed part of the changes for 2017 in the new X4. 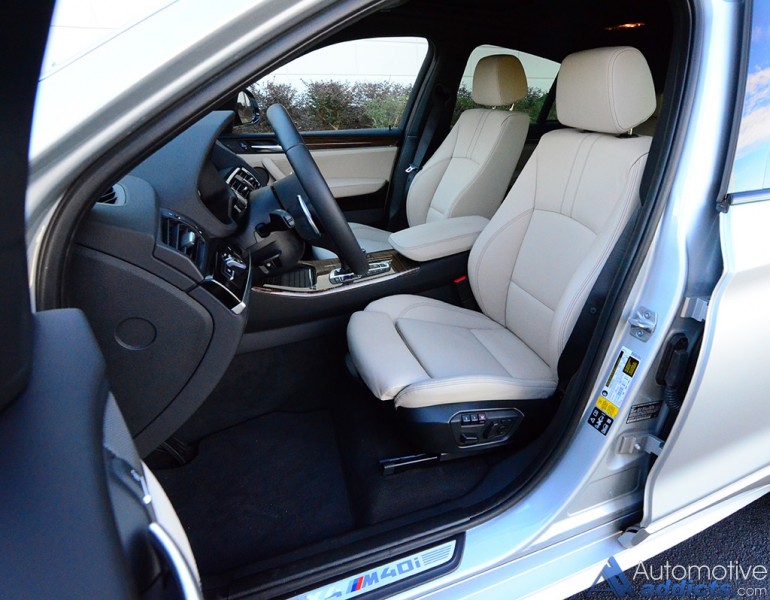 I found that the space inside of the X4 M40i to be uninviting or not ideal for my tall 6-foot stature. The legroom seemed a bit short and not customary to BMW’s long history of having front seats with an abundance of forward and aft adjustability. The X4 M40i was almost uncomfortable due to the short seat travel. Out back, for obvious reasons, head room is short, and cargo capacity doesn’t cut the mustard for what most people desire in a crossover utility vehicle. Though, if style and performance are paramount for you, then the X4 M40i is the right choice. 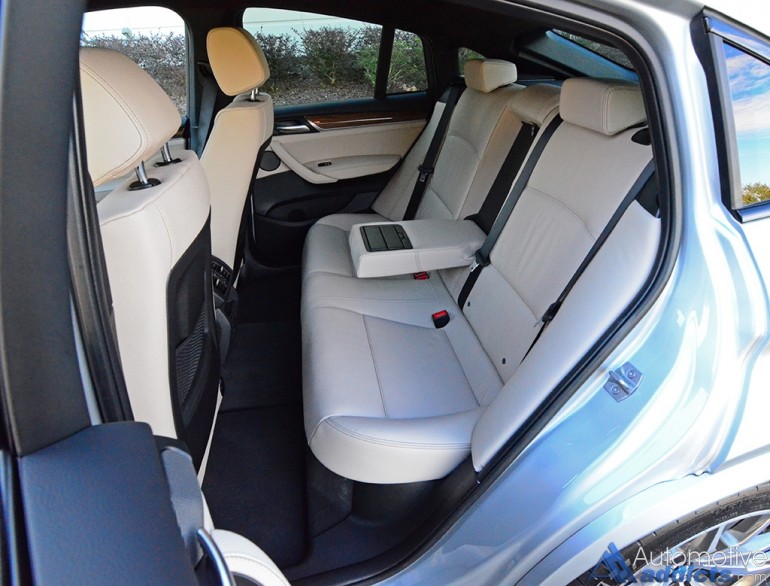 BMW’s willingness to offer something different and unique shines brightly in what the new X4 M40i offers. While not quite a signature M vehicle, the X4 M40i holds its own in the performance arena. If sitting up high, standing out in a crowd, and blasting off into the sunset favors your style more than toting several luggage items or normal-sized rear passengers, then the new BMW X4 M40i may fit the bill. Though, the bill is going to run at least $58,100 while my nicely equipped test vehicle with a Cold Weather Package, LED Lighting Package, Technology Package, Surround View and Review Camera, and 20-inch M Double-spoke staggered wheels wrapped with Michelin Pilot Super Sport tires, comes to price of $67,495. Mind you, the X4 M40i can top that price landing near $70K fully loaded, which is quite a bit to chew off for such a small yet energetic crossover vehicle. 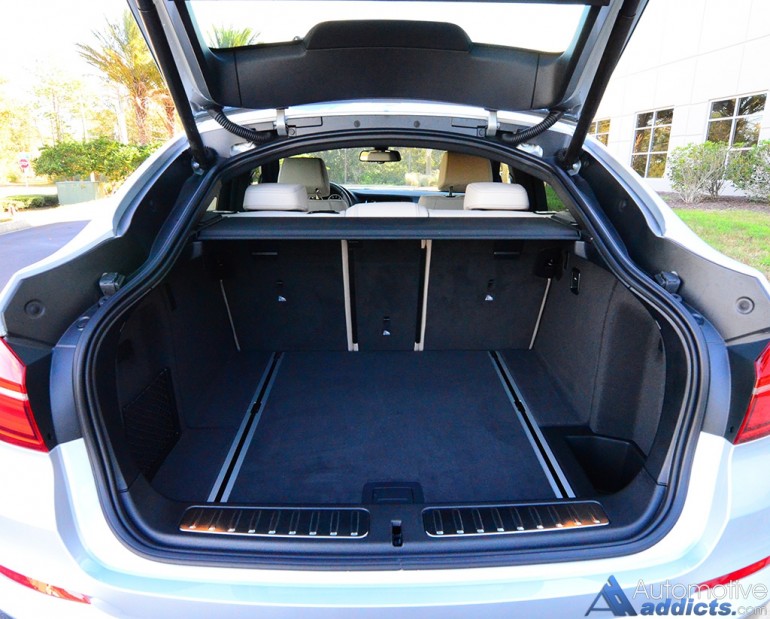