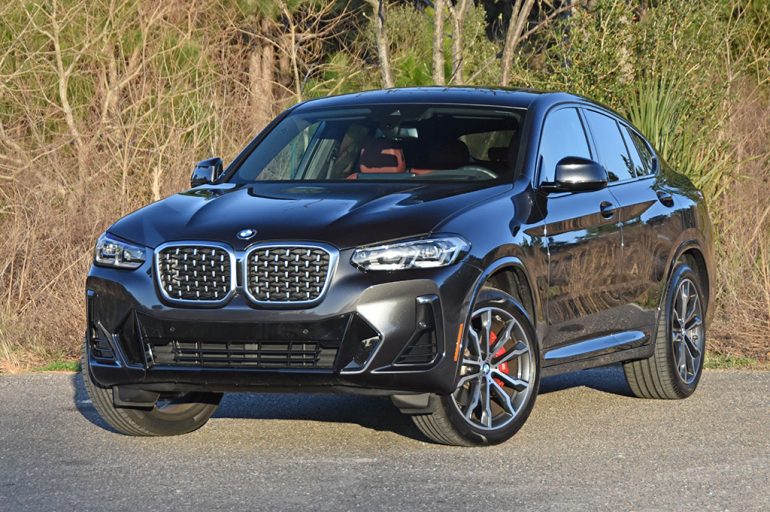 Automakers are constantly experimenting with different and often unique styling options when it comes to their newfound bread and butter crossover utility vehicles. BMW has done such for many years with the X4, a rather unique offering that takes the X3 and makes it a bit more coupe-like with a sloping roofline and its specialized style has paid off well to attract buyers who don’t want a traditional look of a crossover.

The latest BMW X4, which I get in the 2.0-liter turbocharged xDrive30i flavor for the week, is a decent vehicle packed full of desirable features and a surprisingly eager drivetrain. The drivetrain, using a 2.0-liter turbocharged 4-cylinder engine paired with an 8-speed automatic transmission and the latest xDrive all-wheel-drive system is quite a spirited package. The turbocharged 4-cylinder in the new X4 xDrive30i produces 248 horsepower and 258 lb-ft of torque but feels like there’s a bit more than stated on paper, especially when you utilize the clever launch control feature. Making a dash to 60 mph using launch control in the X4 xDrive30i takes about 5.8 seconds and feels more than capable out on the road for times when you need to overtake cars or quickly get up to highway speeds. 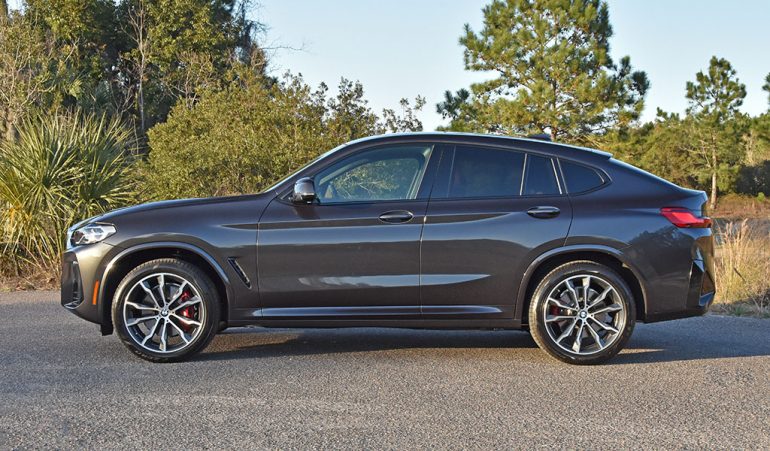 Overall, the new BMW X4 xDrive30i feels nicely planted on the road almost like an entry-level compact luxury sports sedan. The ride quality is good and can be modified through the adaptive dampers by changing the drive mode or customizing the Sport Individual drive mode to your liking. There’s a delightful, assured driving feel to the BMW X4 xDrive30i where it has enough power for most. 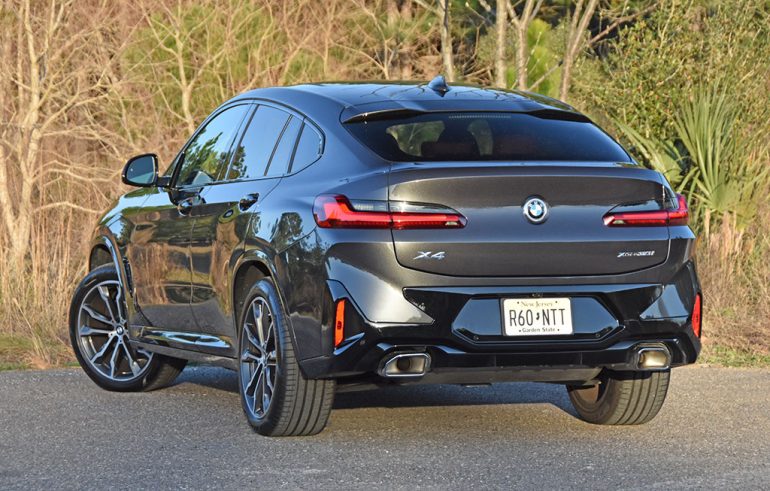 Fuel efficiency is mostly consistent even when you start to push the X4 xDrive30i a little harder. I nearly matched the EPA estimates of 21 mpg city, 28 mpg highway, and 24 mpg combined. Though, my average with mixed driving was more along the lines of 22.8 mpg but my highway driving mileage landed just above the 28 mpg estimate to get right at 29.1 mpg when traveling a few miles per hour above the posted 65 mph speed limit. 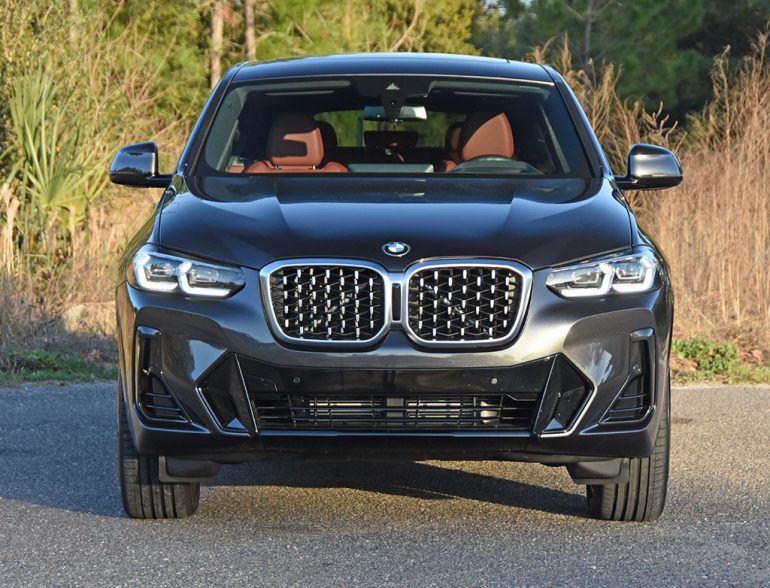 The latest styling of the BMW X4, for the current generation introduced in 2019, has been slightly refreshed for the 2022 model year. There’s a new re-sculpted grille and LED headlights up front, restyled LED taillights, updated sport seats with more bolstering, an updated instrument cluster, and a larger 12.3-inch touchscreen with a natural language voice control system through the latest iDrive setup that can be prompted by simply saying “Hey BMW.” BMW’s recent iDrive is simply amazing from its quick responsiveness to user friendliness after a short learning curve. The large touchscreen along with a redundancy of physical iDrive controls help in giving multiple options of controlling certain features and vehicle functions. 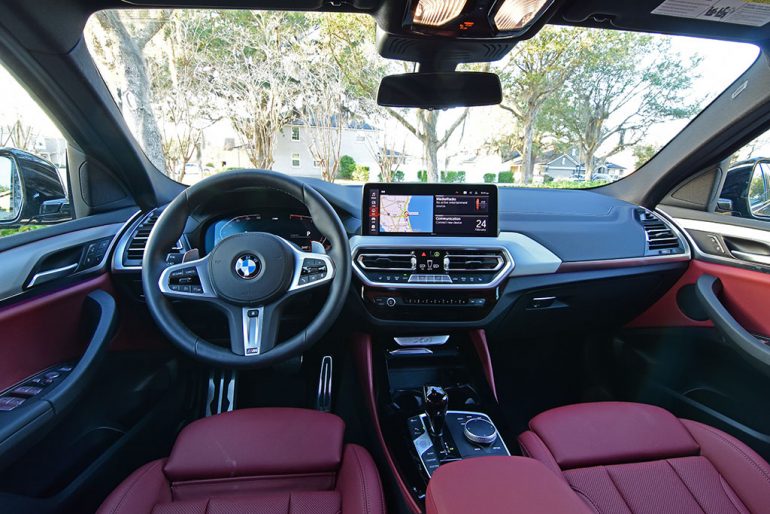 With all the available M Sport Package and Dynamic Handling Package options, as equipped on my test vehicle, there are a few performance enhancements that are welcomed such as the large M-Sport red brake calipers, larger 20-inch wheels, adaptive dampers, and visual enhancements of darkened exterior trim, aluminum interior trim, heated M steering wheel, and an anthracite headliner. 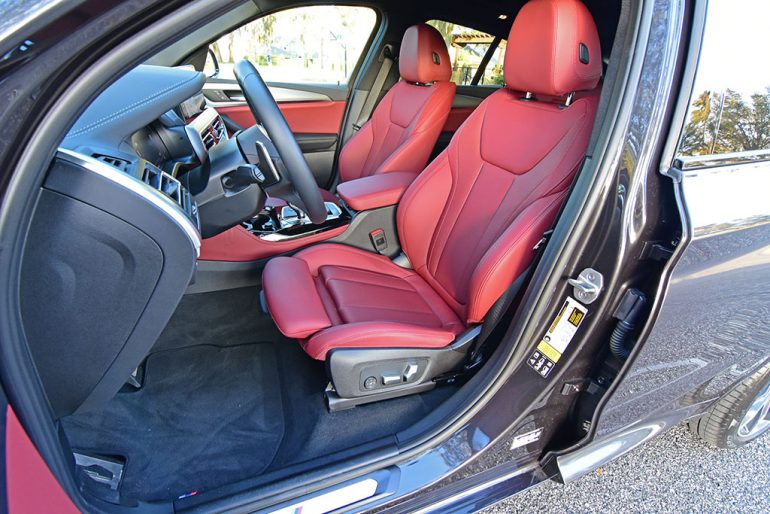 The interior of the BMW X4 is surprisingly comfy and spacious up front. However, in the back, the headroom is cut down due to the sloping roofline but there is just enough space for individuals at or just under 6 feet tall. Otherwise, the back seats provide somewhat usable legroom and hip room. Cargo capacity is cut short as well from the roofline giving you 18.5 cubic feet. Fold the 40/20/40-split rear seat backs down and you have just over 50 cubic feet of cargo room that can be accessed by the power rear liftgate, which somewhat makes up for the utilitarian usefulness of the X4. 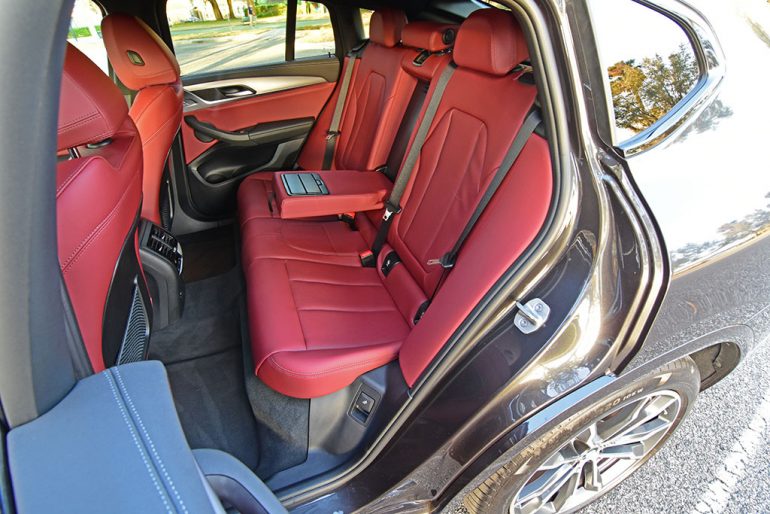 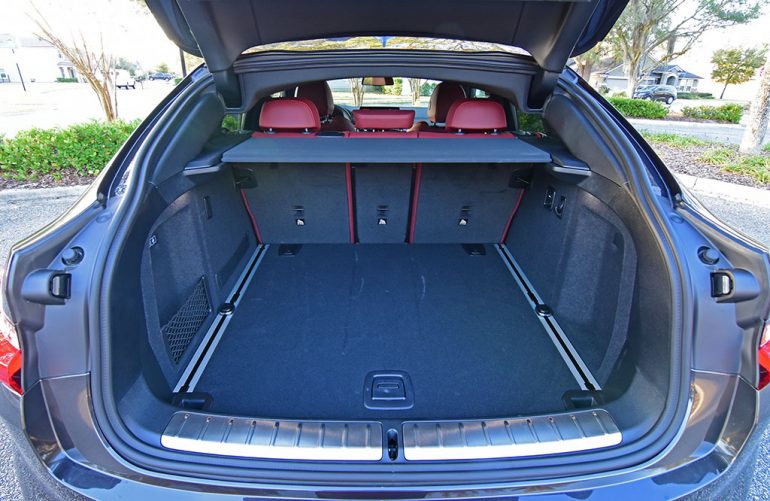 You would not be wrong to think of the BMW X4 as an X3 but with less space and a unique sleek look to appeal to a certain crowd. Fundamentally they share the same platform but have distinctive design aspects that attempt to set them apart, which is a good thing to retain a unique character for the X4 and make the price of my nicely equipped test vehicle at $58,740 seem reasonable, which I think it is.