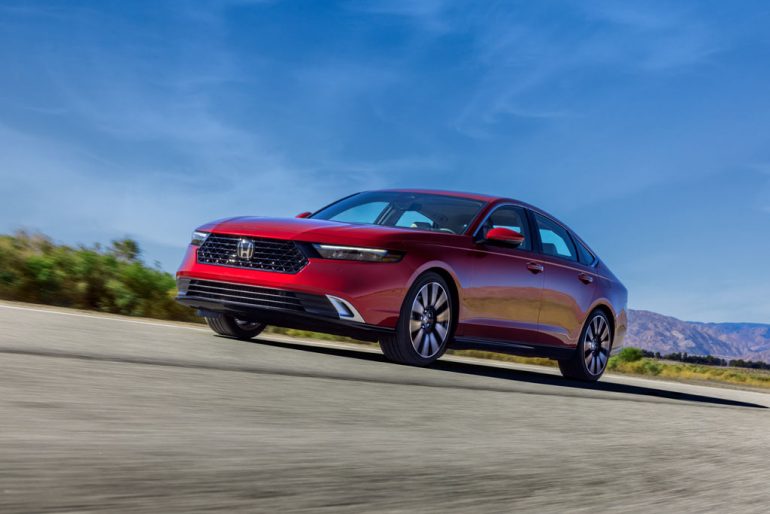 In the automotive industry, there are a few select vehicles that have been staples through many generations and are trusted trendsetters. One vehicle that falls into such a category is the Honda Accord, which has been redesigned for its 11th generation retaining its legendary place in an ever-changing automotive world.

The new 2023 Honda Accord comes at a time when the market is “interesting” to say the least. Americans are still flocking to crossovers and SUVs while the electrification of vehicles is starting to come to the surface. The commitment to mainstream sedans seems to be rather strong with some brands who continue to be successful in keeping such a segment alive and the new 2023 Honda Accord will hopefully further such a movement. Honda looks to keep things fresh and focused even though the platform essentially returns with a redesigned “look” much like the latest Honda Civic.

The new 2023 Honda Accord is sleek looking with new slimmed-down LED headlights and LED taillights that appear to add some sophistication to the midsized sedan. The somewhat sloping rear roof line takes on the four-door coupe aesthetic, which is somewhat of a repeat from the last generation. There are even some hints of Audi throughout, which is a good thing considering a quest to seek those who look for premium touches in an ‘affordable’ sedan. 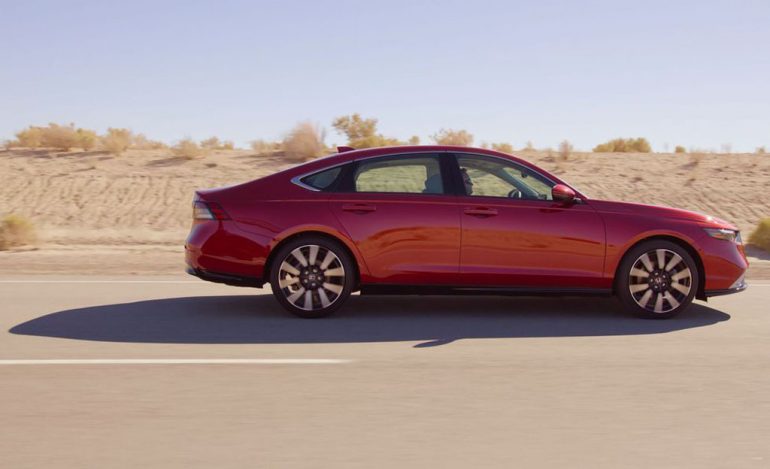 Powering the new Honda Accord is a return of its 1.5-liter turbocharged inline-4-cylinder engine that gets mated to a continuously variable transmission (CVT) only powering the front wheels (no AWD option available). The powertrain makes 192 horsepower and should muster out 30 mpg combined.

The range-topping engine, the 252-horsepower turbocharged 4-cylinder, is no longer offered. However, Honda brings us a stronger emphasis on the new Accord Hybrid, which is targeted to account for half of the vehicle’s sales as it touts 204 horsepower and 247 lb-ft of torque. The trick here is that the Accord Hybrid isn’t a separate trim but rather the only choice for the Sport, EX-L, Sport-L, and Touring trim levels. The hybrid system gets a CVT that now simulates gear changes under heavy acceleration. The hybrid Accord should at least match the outgoing hybrid’s 43-47 mpg combined figures. 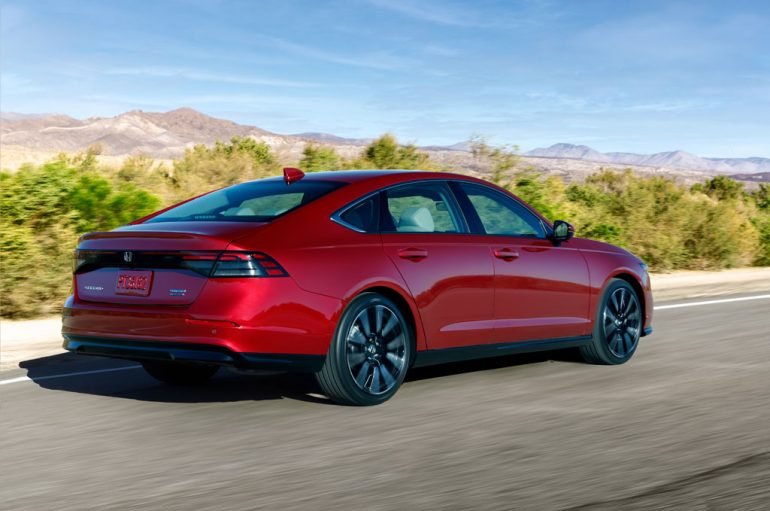 The carryover of the platform for the outgoing generation Accord receives some improvements in the area of rigidity that will improve ride quality, handling, and refinement along with a retuned suspension setup. As you may guess, there’s no manual transmission or coupe offering, once again.

Interior space remains mostly the same but there are upgraded characteristics that take a page from the new Honda Civic. Most of what you see looks to be an enlarged variation of what you find in the new Civic, which isn’t a bad thing considering how well the new Civic has been received taking home The North American Car of The Year award. 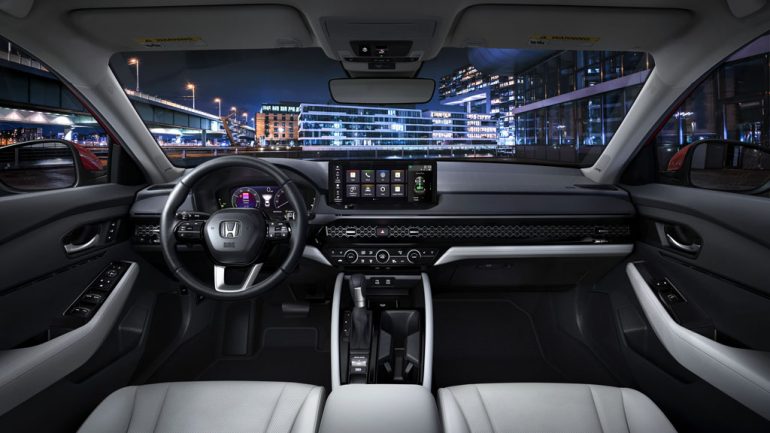 The latest infotainment unit used in the 2023 Honda Accord is a familiar offering now with Google integration and with a bigger 12.3-inch touchscreen on the hybrid trims or a standard smaller 7-inch unit in the LX and EX non-hybrid trims.

Both systems have new software that has Apple CarPlay and Android Auto integration, which is wireless on the larger 12.3-inch unit or connected through USB in the smaller setup. All new Honda Accords get a 10.2-inch configurable digital gauge cluster. We do love the physical automatic climate controls below the touchscreen and mesh-style vents, which is also another page taken from the latest Civic. 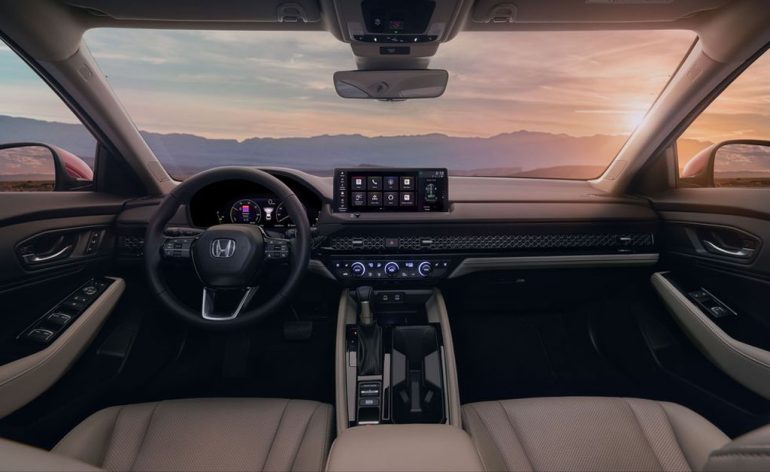 In terms of safety, there’s a return of all the expected active safety features. However, the new Accord utilizes a new catcher’s mitt front airbag, which is something that was first seen on the 2021 Acura TLX. The standard Honda Sensing bevy of driver assists get some improvements with the radar and cameras having wider view angles and the blind-spot monitor can sense vehicles father away. 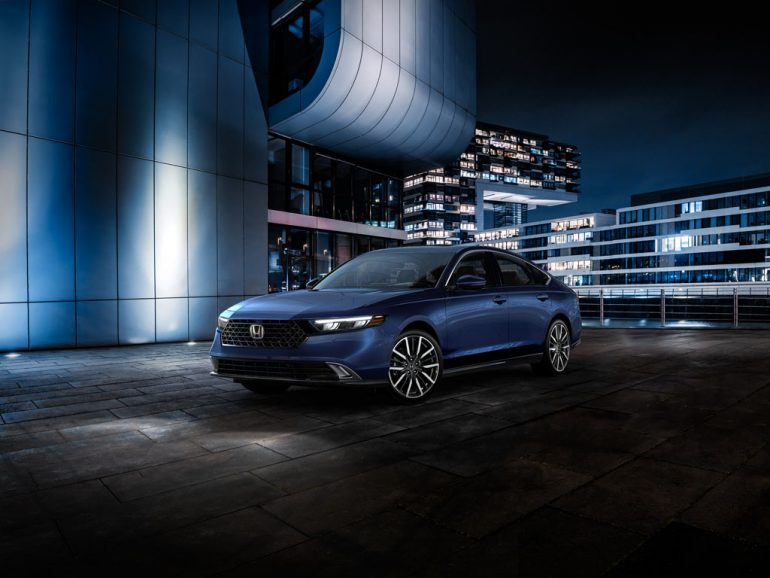