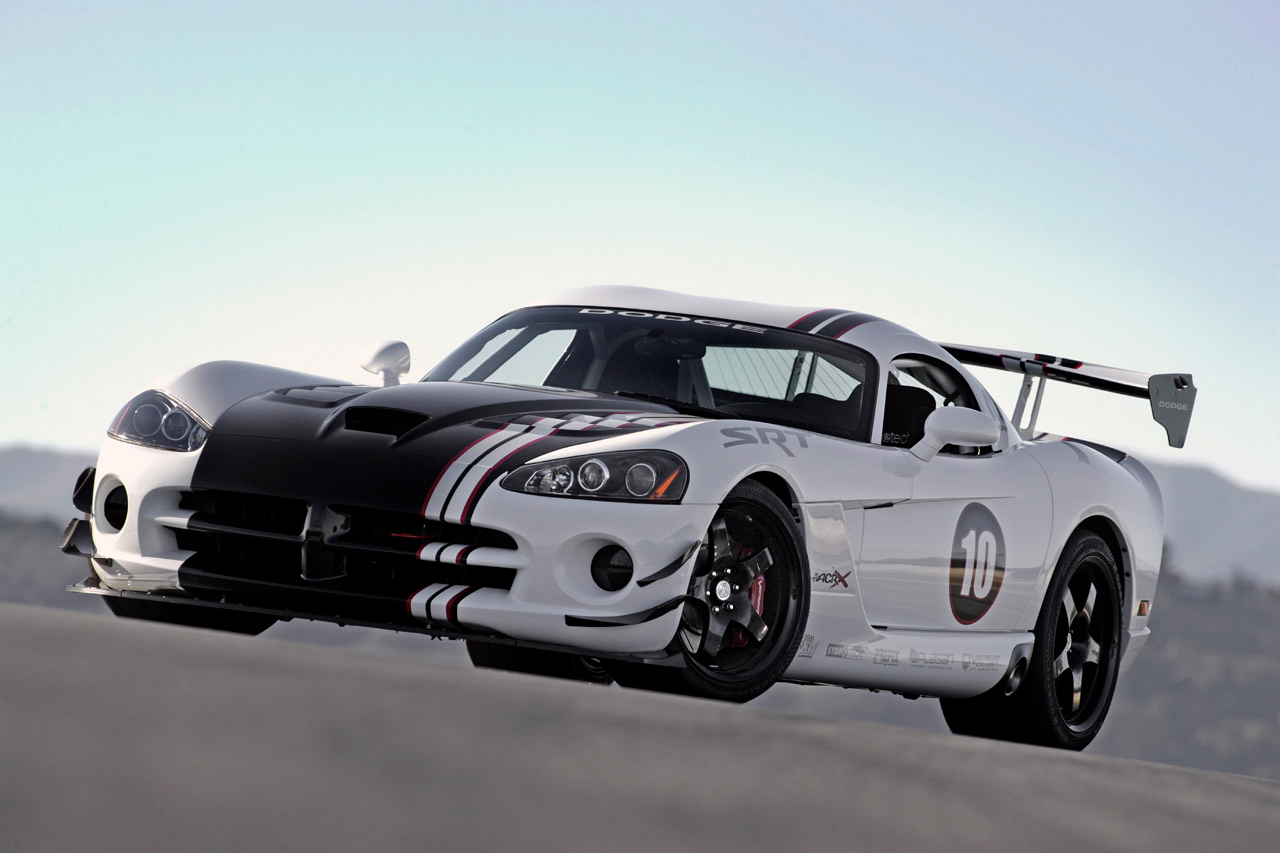 Many automotive enthusiasts may have forgotten about the infamous Dodge Viper. It has always been around and with a new introduction of a “road racing” prepped Viper SRT10 ACR-X, it shows that the bad-ass American muscle car named after a mean snake is still in the game, stronger than ever and here to stay.

Racing enthusiasts will be happy to see Dodge pull the covers off of the new 2010 Viper SRT10 ACR-X that boasts 640 horsepower from a 8.4-liter V10. That’s about 40 more horses to add to the stable from previous versions of the ACR but this one will cost you about $110,000. Is it worth it? Well, here is a video, several images and full press release below to help you decide. Enjoy!

Orlando, Fla., Dec 10, 2009 – Dodge today pulled the cover off the newest special-edition model of the 2010 Viper SRT10 lineup. The Dodge Viper SRT10 ACR-X is a turn-key, non-street legal race car that is slated to make its on-track debut in the summer of 2010.

“The Dodge Viper ACR-X takes the performance attributes of Viper to an even higher level for a wide range of drivers starting with the grassroots racer all the way up to the professional,” said Ralph Gilles, President and CEO, Dodge Brand. “This project is a result of many years of performance engineering expertise from our SRT team, combined with the passion and dedication of Viper Nation, to keep the Viper racing tradition going strong on tracks around the country and the world.”

Combining the best performance attributes of the record-setting, street-legal Dodge Viper ACR (American Club Racer) and the safety equipment of championship-winning Viper Competition Coupe, the Viper ACR-X is powered by the SRT-developed 8.4-liter V10, equipped with factory headers and a low-restriction exhaust system, that produces 640 horsepower (40 more than production model).

The suspension also is tuned and upgraded specifically for on-track usage, while the weight is lightened by a full 160 pounds (versus the standard production Viper) to take on even the most challenging road course. Additional aerodynamic upgrades improve downforce, while enhancing stability and significantly improving grip in high-speed cornering.

In what will be the final year of production for the current generation Viper, the ACR-X is the third limited, special-edition model to be introduced by Dodge. “”We’re going to make 2010 the most exciting year for Viper yet with specially developed cars for the street and the track,” added Gilles. “The ACR-X is targeted at road-racing enthusiasts who want to successfully compete in our ultimate American sports car.”

Last month, the SRT team used a testing session at Laguna Seca raceway to shake down the Viper ACR-X for the first time. Behind the wheel was professional driver Kuno Wittmer from the SCCA Pro Racing SPEED World Challenge Touring Car Championship series, who was able to run consistent 1:31.00 lap times around the 2.238-mile, 11-turn course. Wittmer’s lap times were more than 3 seconds faster than the street-legal Dodge Viper SRT10 ACR that holds the production car track record at Laguna Seca raceway.

“The Dodge Viper ACR-X is incredible,” said Wittmer. “After a short warm up, I was running lap times as quick as exotic GT race cars. I was blown away by the power and acceleration, and even more surprised at how the ACR-X navigated the challenging Laguna Seca corners and how friendly it was to drive at the limit.

“All aspects of the car work together perfectly to plant all that horsepower and torque without issue,” Wittmer added. “This will be a great package for someone coming out of grassroots racing with a desire to step-up to GT level competition. Dodge nailed it with this one!”

Manufacturer’s Suggested Retail Price (MSRP) for the Dodge Viper SRT10 ACR-X will be approximately $110,000. Production is slated to begin in Spring 2010.

For more information on the Dodge Viper ACR-X, call Viper Race Headquarters at (888) 960-3333 or visit www.viperheadquarters.com

The Dodge Viper SRT10 ACR-X will make its on-track debut in July 2010 in a newly developed spec series called the Dodge Viper Cup, which will be sanctioned by the existing Viper Racing League. Each vehicle in the new series must be the new Viper ACR-X.

A contingency program sponsored by Dodge Motorsports and Mopar will pay out more than $200,000 during 2010. Payouts for each race are in cash and Mopar vouchers come as credit toward purchase of Mopar parts and accessories.

The Dodge Viper has enjoyed a successful racing heritage that began in 1996 with the original Viper racing entry, the GTS-R, which earned five international GT championships and the 1997-1999 FIA GT championships. It also posted an amazing overall win at the Rolex 24 Hours of Daytona in 1999 – the first for a production-based American car.

The Dodge Viper Competition Coupe, introduced in 2003, delivered the next chapter with its coupe-shaped carbon/Kevlar body and a track-ready chassis, based on the Dodge Viper SRT10. The Viper Competition Coupe has continued the on-track prowess by capturing the 2004 SCCA Speed World Challenge GT title, championships in Formula D Drifting series in 2004 and 2006 and the British GT Championship in 2007 and 2008.

Dodge has created a new website designed to showcase the Dodge Viper SRT10 both on the street and on the track. Check out the new online home for all things Viper at www.viperheadquarters.com

The Viper Racing League is one race series within the group of three (including Challenge Series and Driving School) sanctioned by Viper Days. The series has 11-weekend events scheduled for the 2010 season at some of the country’s most prestigious race tracks. For more information including the 2010 race schedule, visit www.viperdays.com