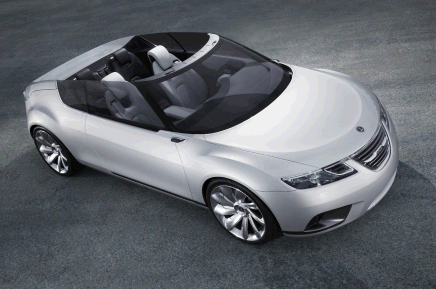 Bold moves are being made in the design labs of many car makers. What better way to make a bold move than by raising the roof in Boston with the introduction of the Saab 9-X “Air” BioHybrid Convertible Concept vehicle? Released today is a press release from Saab for the debut at the New England International Auto Show this weekend. Below is the full press release.

Boston — The first ever Saab Convertible made its world debut at the Frankfurt auto show in the fall of 1983. Now, 25 years later, a Special Edition of the Saab 9-3 Convertible in bright champagne metallic makes its debut in Boston at the New England International auto show, which opens to the public this Thursday, December 4 (http://www.paragonexpo.com/). In addition, the futuristic 9-X “Air” BioHybrid Concept will also be featured at the Saab display in Boston. Well received at its world premiere in Paris earlier this fall, the 9-X Air is an innovative design study exploring what a next generation open-air Saab could look like.

Saab surprised the automotive world when it pioneered the concept of a ‘four season, four-seat’ soft top Convertible. Designed to be practical and stylish, the Scandinavian-styled convertible changed the perception of open top vehicles to be used all the year round.

“Saab has sold more than a quarter of a million convertibles worldwide and the latest edition of the 9-3 highlights the timeless design and responsible performance that Saab convertibles have always represented,” said Steve Shannon, executive director, marketing and product, Saab Automobile USA.

The special edition Saab Convertible will be available in three metallic colors to include Jet Black, Carbon Grey and the new Bright Champagne. It features Saab’s signature 2.0-liter, 210 hp four cylinder engine and can be matched to six-speed manual or five-speed automatic transmissions.

Special content includes influences from the Turbo X performance model, such as the design of the front bumper and steering wheel plus carbon fiber interior finishes and black floor mats with grey binding. Like the Aero version, the rear shows dual exhaust pipes and an anthracite grey bumper insert. Five-spoke, 17-inch alloy wheels will be standard.

Expected to arrive in dealer showrooms in January 2009, the Saab 9-3 2.0T Special Edition Convertible will be priced starting at $ 46,725 including destination charges.

As a hint where Saab might take its convertible in the future, the 9-X Air BioHybrid concept will also be featured at the New England International Auto Show in Boston. Well received at its world premiere in Paris last October, the 9-X Air is an innovative design study exploring what a next generation open-air Saab could look like.

Featuring a unique Canopy Top and a wraparound glasshouse that includes the rear screen, the 9-X Air breaks the mould of conventional convertible design by offering four-seat accommodation within the close-coupled proportions of a sports car.

Its distinctive silhouette is defined by prominent rear pillars that mount the flat-folding Canopy Top and also anchor the separate, recessed rear screen. Top down, the 9-X Air is designed to offer fresh air motoring free from buffeting. Top up, it assumes the look of a true coupe.

Designed in parallel with the 9-X BioHybrid concept, the 9-X Air shares its highly efficient powertrain. The small, 1.4-liter Saab BioPower engine offers responsible performance by combining engine rightsizing with turbocharging, the use of E85 bioethanol fuel and hybrid technology.

The 9-X Air underlines Saab’s leading role in convertible design and is revealed 25 years after the first convertible from Saab was shown at the international Frankfurt Show. Full details and more images are available at www.media.saab.com

Saab is a division of General Motors Corporation. Saab Automobile USA is the importer and/or distributor of the Saab 9-3, 9-5 and 9-7X for Saab Automobile AB, Sweden. For the 2009 model year, Saab offers 7 different models that deliver 27 mpg or better according to EPA Highway fuel economy standards.