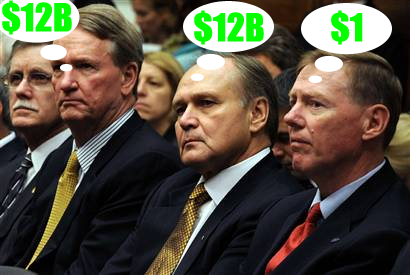 Talking about bold moves again here! Not only has this tid bit of news come out but they plan on putting the sugar on top by traveling to Washington D.C. in a new Ford Escape Hybrid instead of the private jet that all big 3 automaker CEO’s were highly criticized for during the last visit to D.C.

Below is an excerpt from the Associated Press regarding this “new deal” from the Ford CEO.

WASHINGTON – Ford Motor Co. CEO Alan Mulally says he’ll work for $1 per year if the automaker has to take any government loan money. He also said Tuesday his company will seek money from the government, but may not need it.

Detroit’s automakers, making a second bid for $25 billion in funding, are presenting Congress with plans Tuesday to restructure their ailing companies and provide assurances that the funding will help them survive and thrive.

Under Ford’s plans, the automaker will cancel all management employees’ 2009 bonuses and will not pay any merit increases for its North American salaried employees next year.