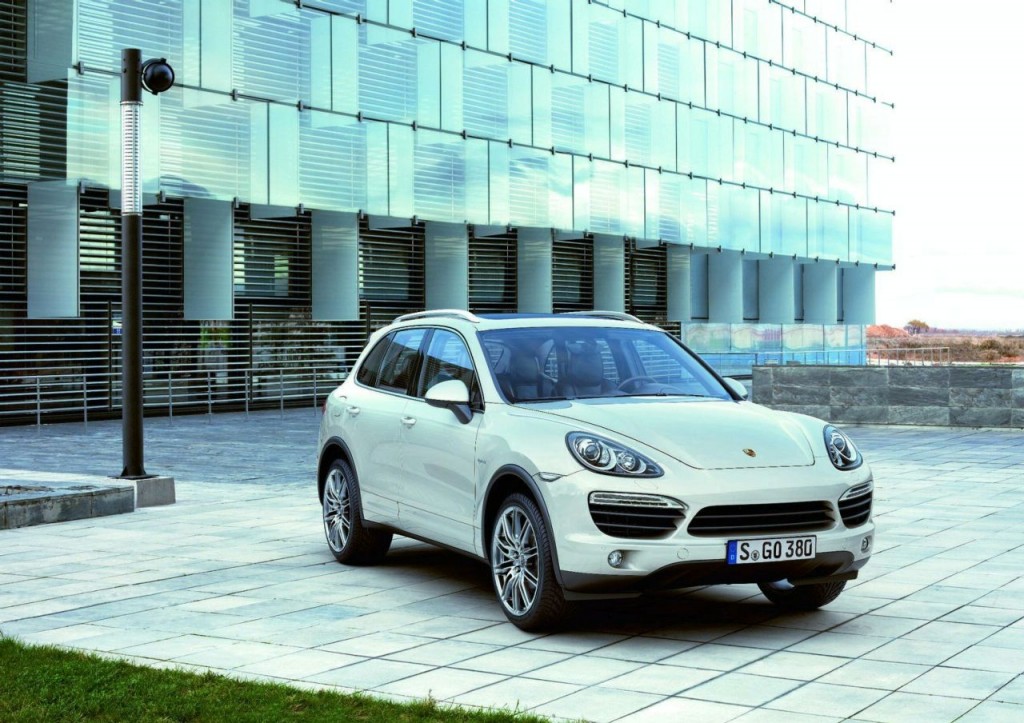 Porsche has released official details and images of the new 2011 Porsche Cayenne. The new Cayenne will go on sale first in Europe starting May 8th of this year and then hit the U.S. market in July. A 3.6-liter V6 with 296hp will be used in the entry level Cayenne. The Cayenne S will sport a 4.8-liter V8 with 395hp and the “go-fast” turbo edition will use the same V8 with the addition of a twin-set of turbos to make 500hp.

New to the lineup will be the Cayenne S Hybrid that uses a supercharged 328hp 3.0-liter V6 doing its duties along side of a 34kW electric motor that will together produce 375hp and 428 lb-ft of torque.

Exclusive Video and Full Press Release of the 2011 Porsche Cayenne below.

ATLANTA, Feb. 25 – Led by a technologically advanced full hybrid model, the all-new, next-generation Porsche Cayenne sport-utility vehicle will debut at the Geneva motor show in early March. In line with the Porsche Intelligent Performance philosophy, the entire range, from the entry level Cayenne with a V6 engine to the 500-horsepower Cayenne Turbo, all deliver improved performance while using less fuel and producing fewer emissions than ever before.

The New Porsche Cayenne will make its North American debut at the New York International Auto Show (press days: March 31 and April 1, public days: April 2-11). The Cayenne S and Cayenne Turbo go on sale in July as a 2011 model, and U.S. pricing will be announced soon. Porsche dealerships will offer the Cayenne and Cayenne S Hybrid in the fall.

The highlight is the new Cayenne S Hybrid featuring a highly sophisticated parallel full hybrid drive system. With a combined power output of 380 horsepower from the supercharged V6 combustion engine and an electric motor, the Cayenne S Hybrid combines the performance of a V8 with the economy of a V6.

Through continuous interaction between the 3.0-liter supercharged V6 and electric motor, the Cayenne S Hybrid focuses on maximum efficiency. Depending on driving conditions, either drive unit can operate independently or together. The 47-horsepower (34 kW) electric motor is the ideal partner for the 333-horsepower engine, which produces high torque at low engine speeds. With peak torque at 427 lb-ft at just 1,000 rpm, the Cayenne S Hybrid’s performance is on par with a V8-powered Cayenne S.

The Cayenne S Hybrid’s two drive units are connected by a decoupling clutch. A hybrid controller constantly coordinates their complex interaction, and intelligent management of the clutch makes the transition among various driving modes seamless. Like many hybrids, the Cayenne S Hybrid can cover short distances on electric power alone, free of emissions and noise up to 60 km/h or almost 40 mph. For aggressive acceleration, the motor provides an extra ‘boost’ to the gasoline engine.

What makes the Cayenne S Hybrid unique is its ability to cruise at high speeds on electric power alone. The gasoline engine can be completely switched off and disengaged from the drivetrain at speeds of up to 97 mph. Christened by the Weissach engineers as ‘sailing’ — or cruising — mode, the drag forces exerted by the combustion engine and their braking effect are eliminated in the interest of lower resistance and fuel consumption.

All new-generation Cayenne SUVs set high standards for efficiency and performance. Compared with the former models, fuel consumption is down by up to 23 percent in the New European Driving Cycle and CO2 emissions are significantly reduced, despite the increased performance. Actual EPA-certified fuel economy figures will be available when the cars go on sale in North America in July.

A new eight-speed Tiptronic S automatic transmission with a wide range of gear ratios and the Automatic Start Stop function (first introduced on the Panamera) contribute to these improvements. So does efficient thermal management of the engine and transmission cooling circuits, on-board electrical network recuperation, variable deceleration fuel cut-off and the Cayenne’s intelligent lightweight construction.

Thanks to a special combination of materials as well as changes in the overall vehicle concept, such as a new all-wheel drive system, weight has been significantly reduced on all models. Despite an even higher standard of safety, the Cayenne S is 400 lbs lighter, which not only improves fuel consumption and lowers emissions, but also boosts performance, agility, and handling.

The completely new Cayenne design leaves no doubt that it is part of the Porsche family. Its sporting character is evident from all angles, and its Porsche shape and design highlights are more distinct than ever before.

The new Cayenne is 1.9 inches longer than its predecessor, and an added 1.6 inches in wheelbase ensures extra space and greater versatility. But despite larger exterior dimensions, the new Cayenne looks far more compact and dynamic.

Inside, the luxurious interior features a high center console that, like the Panamera, rises up at an incline to meet the dashboard center stack with high-quality fittings and a touch-screen infotainment interface. Porsche’s traditional set of five round instruments in the drivers gauge cluster includes a high-resolution circular TFT screen to the right of the tachometer. It can be used to change radio stations, vehicle settings, or access the navigation system or view the map. Rear-seat comfort is much improved, as well. The bench slides fore-and-aft by 6.3 inches, while the backrest can be adjusted to three different angles.

The entry-level Cayenne with its 300-horsepower 3.6-liter V6 engine and mated to the new eight-speed Tiptronic S automatic transmission consumes 20 percent less fuel in the New European Driving Cycle than its predecessor.

Fuel consumption is also down significantly on the high-torque Cayenne S. Its 4.8-liter V8 produces 400 horsepower, 15 more than the previous model. When combined with the overall weight savings, performance is markedly increased, yet fuel consumption is down by 23 percent in the New European Driving Cycle.

The Cayenne Turbo, with its 500-horsepower, 4.8-liter twin-turbocharged V8 also consumes 23 percent less fuel than its predecessor despite its improved performance and acceleration.