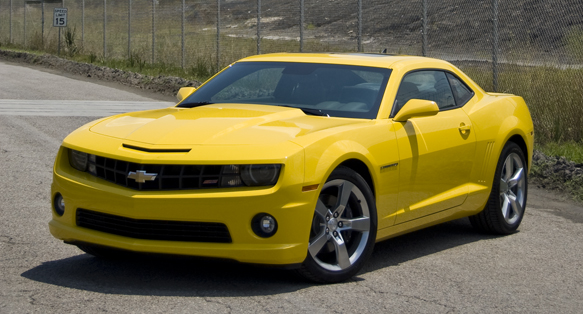 When you are sitting behind the wheel of a cool looking car, do you get that “big-head” feeling?  You know, the car that just attracts all types of attention? That’s just the selfish feeling that I had for a few moments while driving the new 2010 Chevrolet Camaro SS. As I reminisce about the time spent in the 2010 Camaro SS I would like to thank Chevrolet for bringing back a true classic sports car.

Not only did General Motors bring back a classic, but they brought it back in “transformed” style. The Camaro, in its Super Sports form, is one quick sports coupe to be reckoned with. The Camaro SS leads the pack along with the new 2011 Mustang GT and Dodge Challenger SRT8 for true American muscle cars. 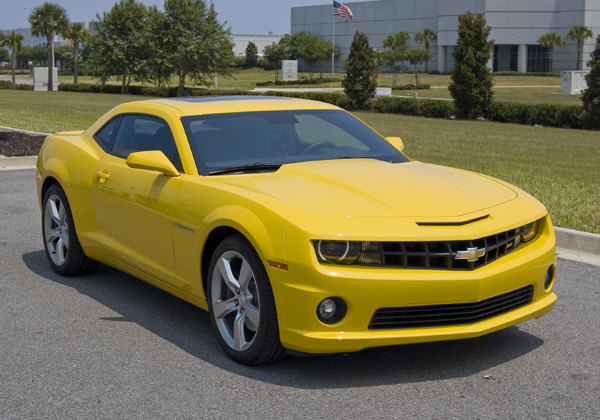 Chevrolet has incorporated independent suspension for the first time in the Camaro with MacPherson struts up front, giving the Camaro a good ride that is stiff enough for the challenges that you would put any sports car through. Even though the Camaro SS falls just slightly after the 2011 Mustang GT in terms of performance, the Camaro SS is still not a pushover by far. It falls behind the Mustang GT mainly in part due to the Camaro SS being heavier, about 250 pounds more than the Mustang.

The exterior of the Camaro SS is truly remarkable from the eye-lid effect headlights with halos to the beefy side finders all the way to the wide road hugging rear-end. There is no mistaking the new Camaro for anything else. With the Camaro’s success as one of the stars in the Transformers movies, it became an instant hit among car enthusiasts. This sort of takes you away from the few flaws of the Camaro once you sit inside. 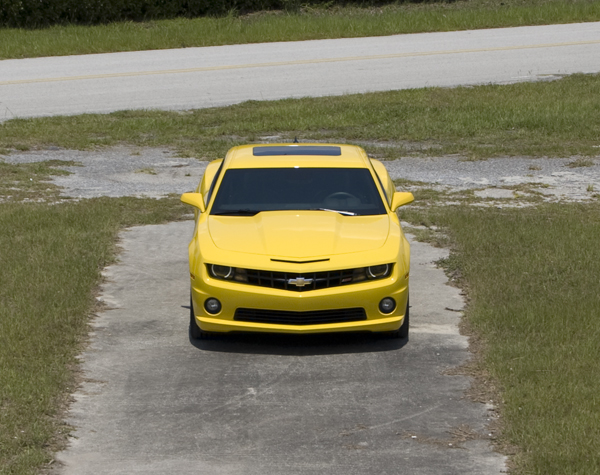 The large 20-inch sterling silver painted aluminum wheels also add to the character of the Camaro SS which is a necessary feature to fill the rather large wheel wells. Our yellow test car screamed “transformers”, even though it was not an actual “Transformer” edition. That is all you could really think of after taking a first glance at it rolling down the road. I am sure you can find a better looking car on the road but you would have to search very hard for one in the Camaro’s price category considering the Camaro V6 starts at $22,680. 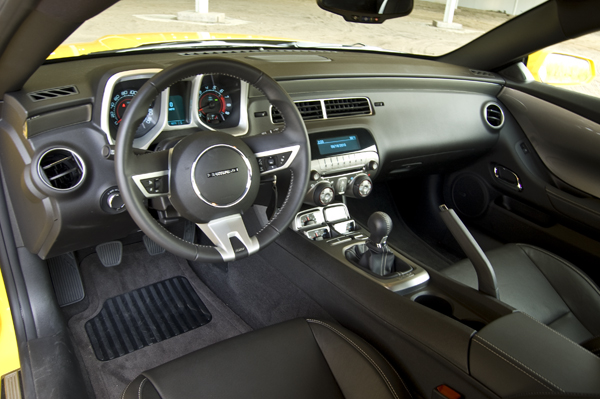 The relatively high beltline of the Camaro gives you a feeling of substance. Although you do get an abundance of substance under the hood, we are not sure if it is all extracted in the way we would have hoped. The interior is very functional with the exception of the deep-dish designed steering wheel. We are not sure how this design made its way to the Camaro. It looks cool but it is not very functional with human hands. The retro-styled instrument cluster is clear and easy to read. It goes well with the lower podded instrument readouts for transmission temp, oil pressure, oil temp and voltage. This is a very nice touch that gives the Camaro’s interior a distinctive styling. Rear seating is somewhat tight but expected for this segment. 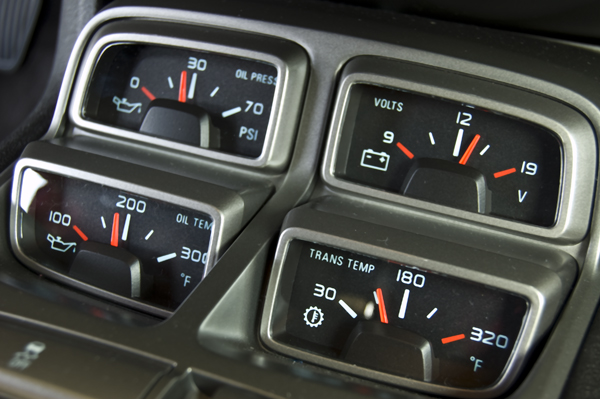 All controls are easy to figure out including the over-sized rubber HVAC knobs. Not sure if the rubber actually makes it easy to turn the already-big controls but it works well. A Boston Acoustics stereo with XM Satalite radio was included as part of the 2SS trim level. The 6-speed shifter was quite interesting as it automatically unlocks the reverse gate when you come to a stop allowing your shift to reverse virtually effortless. I don’t know if that is a good thing or bad thing considering how some people like to “play” with the shifter at stop lights. 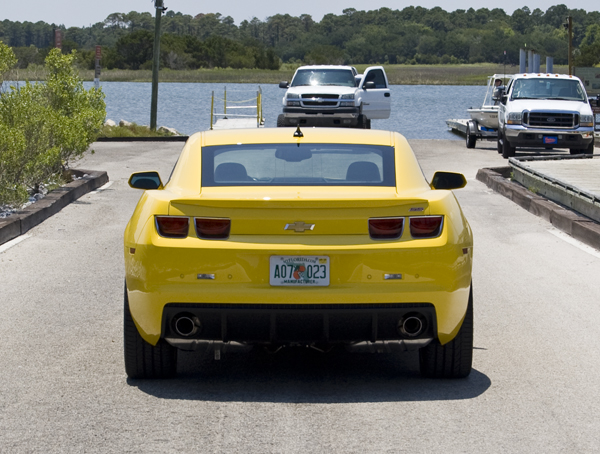 Performance is a given when it comes to a Chevy Camaro even when you go back to the 1960’s. The big bowtie knows a thing or two about laying down some Detroit muscle. The Camaro SS is a performer. Even though its true weight shows at times, it is not shy about throwing it around the track. A 426ph pushrod V8 can easily propel all 3,860 lbs to 60mph in about 5 seconds or less. It does take some extra effort from the driver to navigate through the tall gears of the 6-speed manual but the reward is well worth it. An available 6-speed automatic unfortunately reduces the power output to 400hp. The 6-speed manual in our test car has unpredictable gates that you must somewhat adapt to. Power delivery is very smooth, so smooth that driving the Camaro SS does not seem near as fast as it does riding as a passenger. 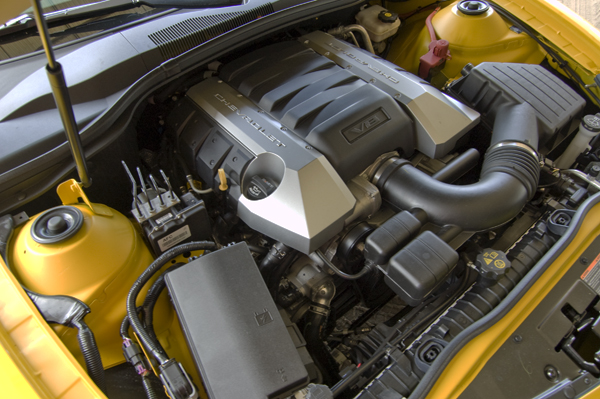 Big 14.0 inch front and 14.1 inch Brembo brakes bring the Camaro SS to a stop in about 111ft from 60mph. Stability control and traction control keep the fat rear-end in place. Turn off the electronic nannies and you better watch out, the rear is apt to kick out under wide open throttle as the 275/40ZR 20” Pirelli P-Zero rear tires beg for grip. Steering turn-in is good with a neutral feeling and hardly any understeer or oversteer in part due to the front 245/45ZR 20” tires. The independent suspension, with big stabilizer bars, help keep you in the line that you pick on the track despite the heftiness of the Camaro. 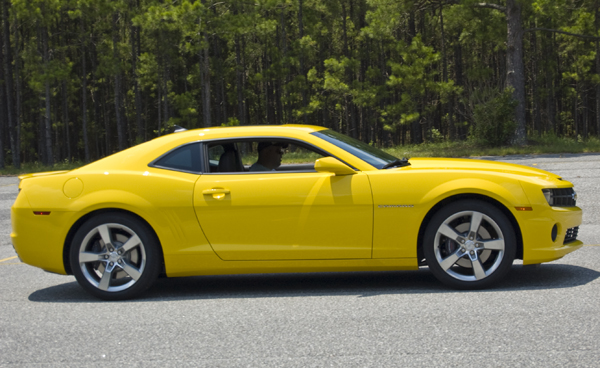 The new Camaro was listed as the best selling sports car from May of 2009 to May of 2010. That’s a major accomplishment for Chevrolet leaving behind the Ford Mustang. With Ford introducing a 305hp V6 Mustang and 412hp Mustang GT, the 304hp V6 Camaro and 426hp V8 Camaro SS now has someone else to compete with. Nevertheless, these two icons have been fighting for many decades now so that’s nothing new. Rumor has it that a new Camaro Z28 will have even more power (think Cadillac CTS-V 556hp proportions), which could out-power the current GT500. We are pretty sure GM would not mind using the powerplant in the Cadillac CTS-V in the upcoming Camaro Z28 especially if it means beating the Ford Shelby GT500 in a horsepower race. Let the games begin. 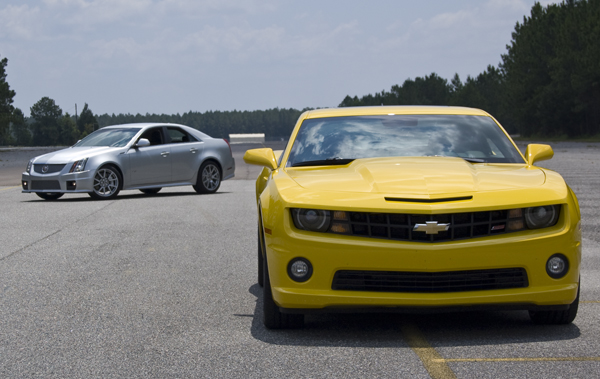 Meanwhile, if you are in the market for some serious American muscle in the form of an iconic classic wearing a sharp outfit and a bowtie, then the Camaro SS is the key to your personal transformation.