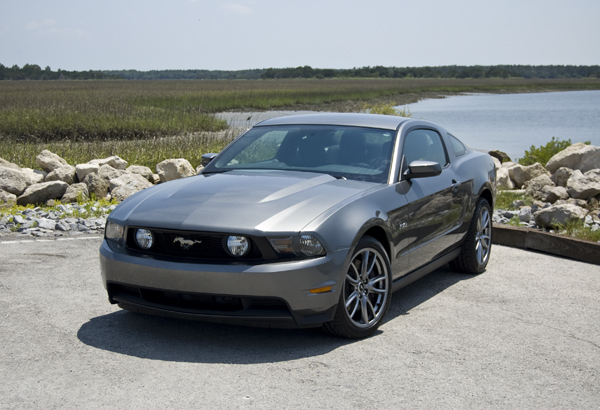 “Oh Yeah!” That’s all I need to say after driving the new 2011 Ford Mustang GT 5.0 for the first time. The iconic pony car, that just about everyone in his or her sane mind recognizes on the road, is better and more powerful than ever for 2011.

Ford did their homework in providing consumers with an uncompromised performance bang for your buck. The war has begun between other cars in the Mustang’s segment sparking conversations, and arguments, among car enthusiasts from all around the world.

The 2011 Ford Mustang GT in our garage reminds you of how enthusiasts saw the pony car back in the 1960’s with the rear spoiler delete ‘clean-look’. The 2011 Mustang GT’s optional big beefy Brembo brakes and 19-inch wheels wrapped in Pirelli P-Zero rubber screams performance and answers back with a 412hp and 390 ft-lbs of torque 5.0-liter V8. That’s right, the 5.0-liter is back with a vengeance after a 10-year hiatus. 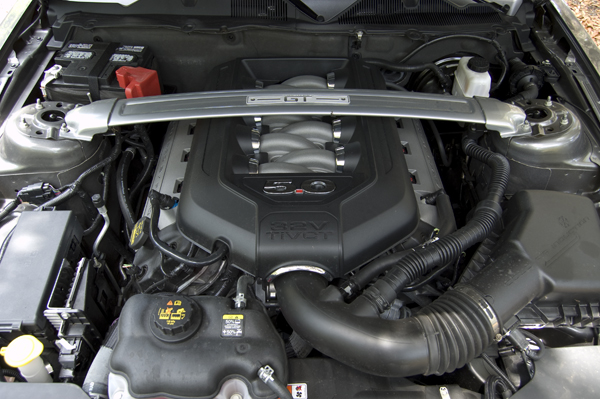 To send all of those raging 412 horses to the solid rear axle is a well-designed 6-speed short shifting manual transmission. The gates were close together with just enough notchyness to perform some nifty shifting when you want to push the Mustang to its limit. A 6-speed automatic is optional but who wants an automatic when you can enjoy the pony car the way it was meant to be? 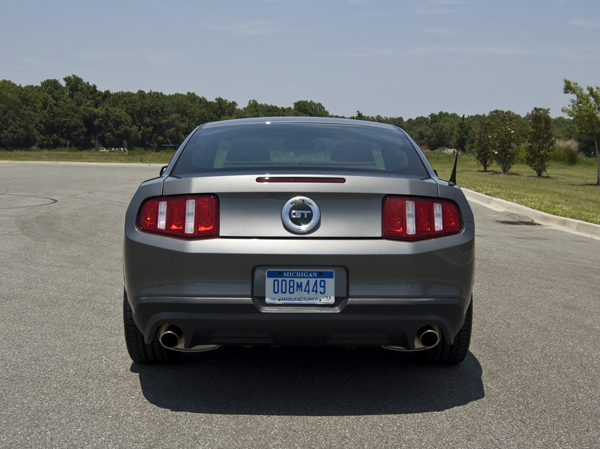 Put your foot through the floor and the 2011 Mustang GT will outperform a new Chevy Camaro SS and Dodge Challenger SRT-8 with a bright smile on your face. Aside from just performance, the Mustang GT has a lot more to offer such as decent gas mileage for a big 5-liter V8 at 17mpg city and 26hwy. These figures are almost unheard of in such a monstrous V8-powered vehicle. 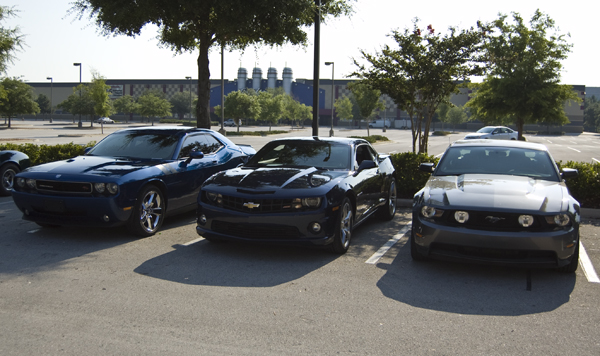 Now back to the performance stuff that I was discussing earlier. The 2011 Mustang GT in our garage also had a 3.73 rear end that laid the power to the ground propelling our GT to 60mph from a standstill in 4.5 seconds. The big 14-inch Brembo brakes up front provided enough clamping power to match the stopping distance of performance cars twice the cost of the Mustang GT. Speaking of costs, Ford has managed to please the consumer with a starting price of $29,646 for the GT while the V6 Mustang with 305hp starts at a low $22,995 with better class-leading gas mileage figures reaching 31mpg. 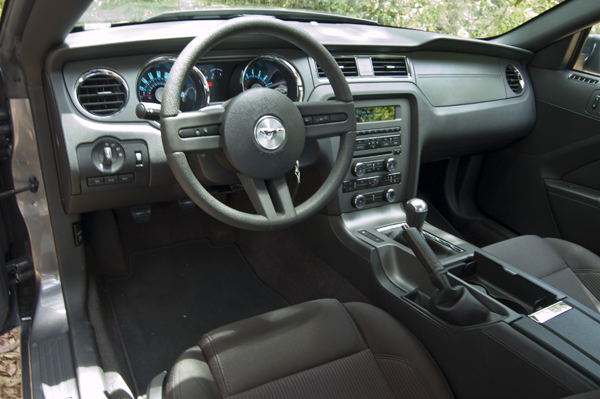 The interior of the 2011 Mustang GT may be an area where Ford was able shave off some coins from the price. Although the interior is very functional, it still comes off as mediocre. Nevertheless the interior works well and you seem to forget about any downfalls that it has every time you apply your right foot to the right pedal. That just puts a big smile on my face and I seem to even forget that the Mustang even has a stereo, which by the way, is rather disappointing. That can easily be fixed with the upgraded optional entertainment system by way of Ford’s ‘talked-about’ Sync. I was simply able to solve the weak stereo dilemma by rolling down the windows and listing to the growl of the 5.0-liter V8. Oh boy, what a nice sound system the 5.0 is! 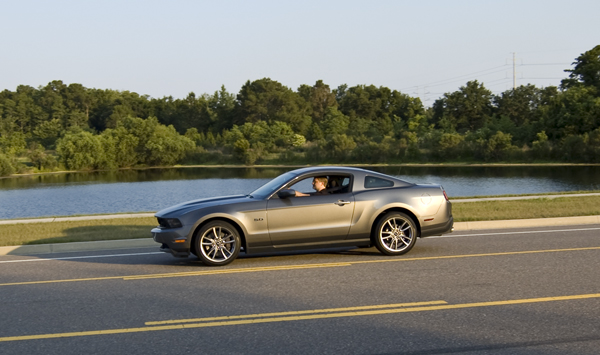 A few other things were lacking when it comes to the interior of our test vehicle. A leather wrapped steering wheel with audio controls would have been nice but that’s something we can easily live without especially with a few extra bucks in your pocket considering a price of $32,980 for our test car. The cloth seats are well supported and comfy even if the re-tuned suspension is a bit stiff at times.

Outside of the 2011 Mustang GT you will find designs similar to the 60’s Mustangs. There is no way to mistake the new Mustang for anything else. Ford has done a great job modernizing the Mustang with the typical techy gadgets for safety such as traction control and stability control. The taillights even have a modern touch to them with sequential turn-signal LED taillights. Several years ago this was only thought of as an aftermarket modification. Now you get it from the factory. Blind-spot mirrors in the side-view mirror is a nice added touch to the new Mustang helping you see any cars or objects next to you.Someone at Ford is listening to their customers. The front fascia is a carryover from the 2010 model year with integrated classic-looking fog lights in the front grill and the lidded headlights look. 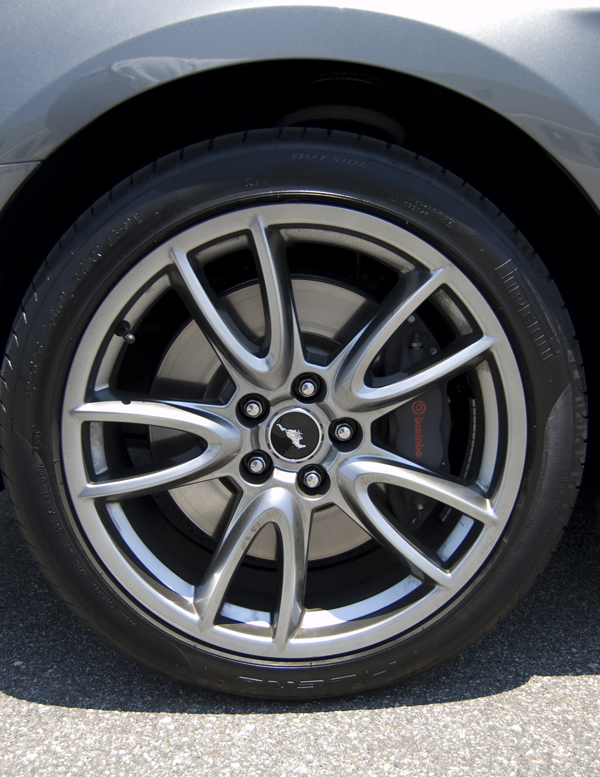 The big 19-inch wheels and Pirelli P-Zero tires are an excellent choice for the GT which signifies to others that this car has something serious under the hood. As if you did not know that there was a big 5.0 liter lurking under the aluminum hood. It says so on the side of the Mustang GT in shinny numbers with a red decimal. Sometimes this is the only dead-giveaway that this Mustang GT has 412hp and not last year’s 318hp. Big difference! 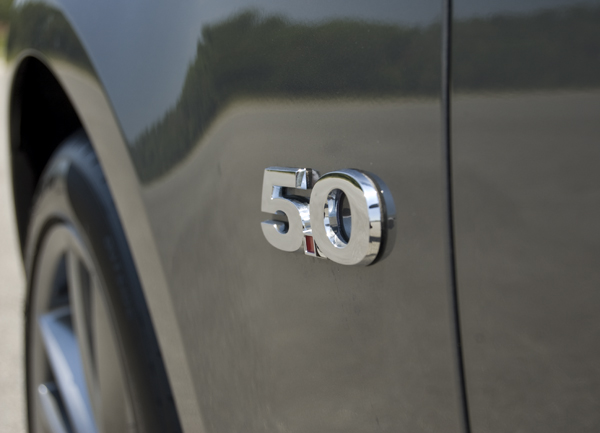 Having driven the 2010 Chevrolet Camaro (upcoming review) and Dodge Challenger SRT-8 6-speed, I can honestly say that the Mustang GT 5.0 has a slight edge over the competition in the performance department. Even though when pushing the 2011 Mustang GT into the turns, it does not give you a since of security having some initial body roll.  However coming out of the turn reassures you of its true capabilities.

The spring rate is a good compromise for cornering and for those long stretches on the highway. 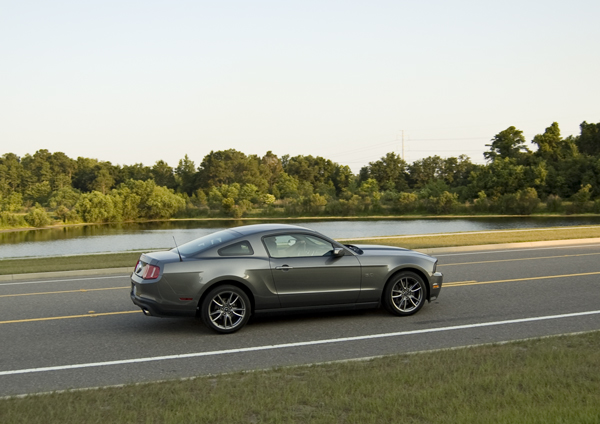 As far as value goes, the 2011 Ford Mustang GT is probably the most bang you could get for its price point. Be that it may, other modern American muscle cars can be tuned for relatively low prices to beat the snot out of the 2011 Mustang GT but the Ford Mustang is one of the most modified and aftermarket-sought-after cars around. Not to mention, the 540hp GT500 is a tuners dream car with a warranty. With that being said, Ford has done a remarkable job with the new Mustang GT 5.0 especially in the area of performance. Now if only they would send us a rag-top version so we can pop in our Vanilla Ice CD and feel right at home signing “Rollin, in my 5.0 with my rag-top down so my hair can blow”.