Knock, Knock its GM… Your Chevy Volt is Almost Ready 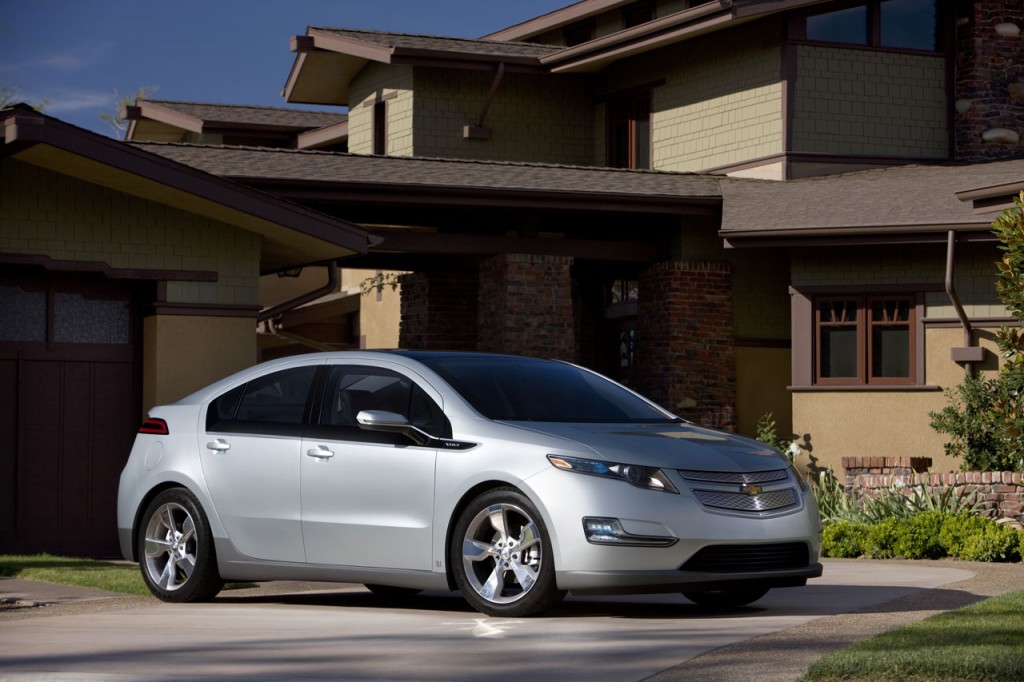 Well the Volt is on its way to the market and boy it was like watching your own baby being born yes its beautiful and educating but damn it seems like it took forever.  Now with the limmeted release in their chosen few areas that were decided may make some people disgruntled. You know that slight feeling of prejudice when you are not the chosen one, and that scales all areas of humanity. Enough of my ranting about being dissed because I do not live in one of those chosen areas. I will just borrow my brothers and test drive his when he gets it.

I like what GM has done from the beginning too the end of the development process of this vehicle from the human standpoint. From a sexy yet un usable prototype they produced a design that is almost enthusiast worthy but can satisfy the Eco and Techno geeks that usually buys these types of environmentally sound looking cars. Unlike those hideous creations by Toyota and Honda the Chevy Volt has a considerable amount of style to unlike the crap GM has been throwing on the street prior to the last 7 years.

Even though a good portion of the remnant are still deadly to the environment if stored in large quantities I still consider the volt to be an advanced species of automotive technology. We are still evolving we will get the correct combination sooner or later. All in all the entire platform looks atractive and solid and their quality in vehicle manufacturing has improved dramatically over the past five years, so the recipe for a good hybrid soup is in place lets just hope build it and they will come is still happening in this economy. 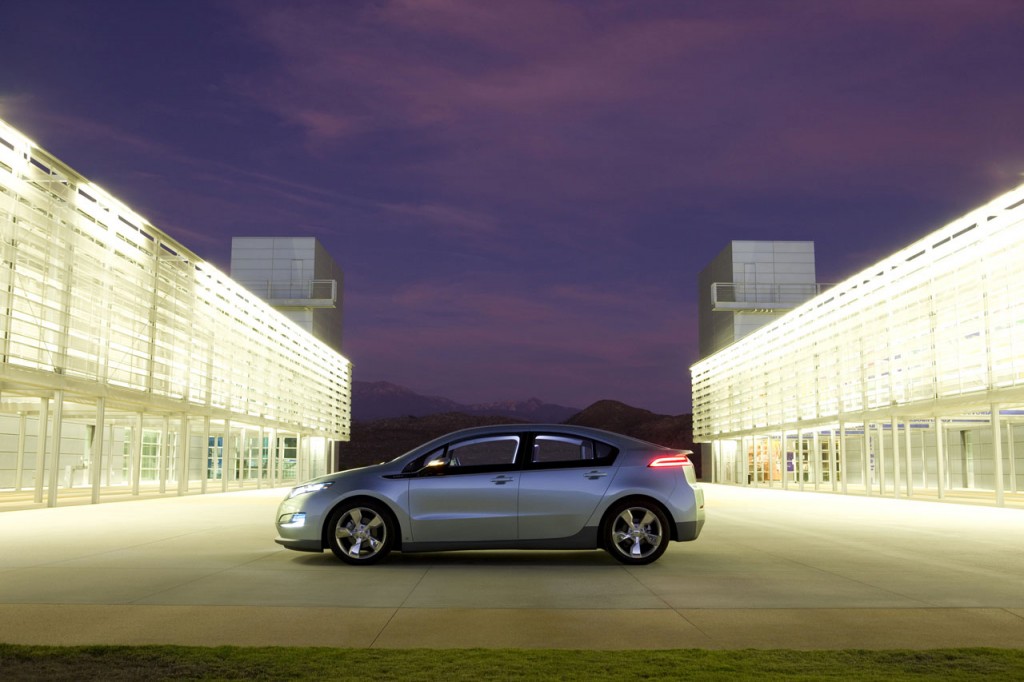 As we all are aware of by now GM buried it original electric car over a decade ago at the same time I saw Toyota testing battery powered RAV-4s on the city streets of New York with plug in charging stations. I wonder where we would be today if they had stuck with it. Anyway the Volt looks like a top notch piece of work even if they had to be kicked in the backside to make it. Lets pray that they won’t ditch it like the EV1 for their own ill-gotten gains, but pursue a more environmentally sound form of transportation for the goodness of the human race. Haa haa I kill myself sometimes, like those greedy bastards give a crap.

The major questions that haven’t been answered yet is what will the carbon foot print of the power plant be once we have to plug in a couple million of these babies and I mean all manufacturers that are producing hybrids, or if I have a power outage can I just go start her up and power my house till the rolling blackouts have stopped because my HOA won’t allow me to put solar panels on my roof since their property value may go down. Oops their I go ranting again, please forgive me. 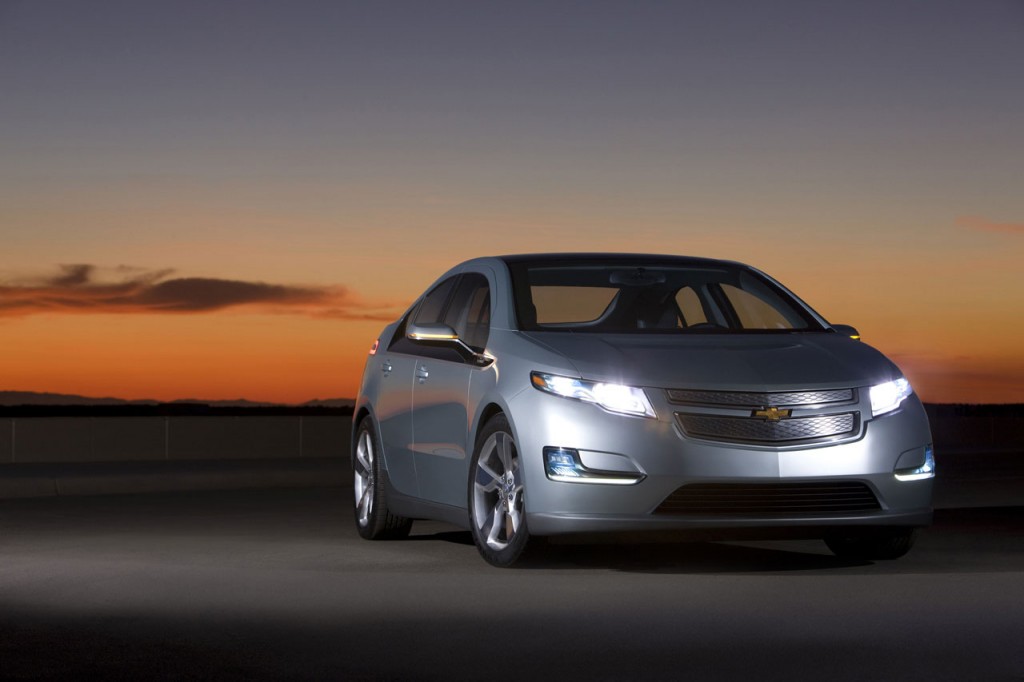 By design it says drive me like you love me, come play with me you will have fun, Relax I have you covered, let’s see where the edge of this envelope is and push it. And yes its looks a little sweet almost auto eye candy worthy. Back to reality and is a responsible investment that should have been made a long time ago.

Here is the link that will give you almost every bit of info you need to get to know more about the Volt: http://www.chevrolet.com/pages/open/default/future/volt.do#

AUSTIN – Chevrolet is adding Texas, New York, New Jersey, and Connecticut to the launch markets for the Volt, Ed Whitacre, General Motors chairman and CEO, announced today. Whitacre said the company is expanding the initial launch of the groundbreaking electric vehicle in response to intense interest in the Volt from customers across the country.

Today’s announcement brings the initial Volt retail markets to seven, including California, Michigan, and Washington, D.C. The retail launch in Texas and New York will begin with Austin and New York City in late 2010. The balance of Texas and New York, as well as New Jersey and Connecticut, are scheduled to begin receiving Volts in early 2011.

“We can add markets as diverse as Texas and New York because the Chevrolet Volt can handle both urban commuting and longer trips, in Austin summers and Manhattan winters,” Whitacre said. “The Volt can be your primary vehicle, giving you the freedom to drive gas-free without the stress of planning every trip around the battery’s charge level.”

The Volt is the only electric vehicle that can operate under a full range of climates and driving conditions without limitations or driver concern of being stranded by a depleted battery.

“Chevrolet is extending the Volt launch to additional states because of strong customer interest and our confidence in all aspects of the vehicle and battery,” said Tony DiSalle, Chevrolet Volt marketing director.

The Chevrolet Volt is capable of about 340 miles total driving range, with electricity driving the car at all times. For trips as long as 40 miles, the Volt gets its power solely from electricity stored in its 16-kWh lithium-ion battery. When the Volt’s battery runs low, an engine-generator seamlessly engages to extend the driving range to about 300 miles on a full tank of gas.

According to a U.S. Department of Transportation survey, the average driver in America commutes less than 40 miles per day, meaning Chevrolet Volt owners may never use gasoline or produce tailpipe emissions in everyday driving.

A portable 120-volt vehicle charge cord that can recharge the Volt using a standard residential outlet comes standard with every car. Volt’s intelligent charging technology enables the Volt to be charged from a standard 120-volt outlet in about nine to 10 hours, or from a standard 240-volt outlet in about three to four hours. The first buyers of the Volt also may be eligible for one of 4,400 free 240-volt home charging stations from ECOtality, Inc. or Coulomb Technologies, under a program administered by the U.S. Department of Energy and funded by the American Recovery and Reinvestment Act.

Volt production begins late this year at GM’s Detroit-Hamtramck facility. Pricing has not been announced.

* Chevrolet Volt making a four-day, 1,776 mile trek from Austin to New York City
* Chevrolet is using social media to allow fans to connect with the Volt team throughout the drive via the following sites:

AUSTIN – To celebrate Chevrolet adding Texas, New York, New Jersey and Connecticut to the launch markets for the Volt, this unique electric vehicle with extended range capability will be driven 1,776 miles from Austin to New York, while passengers post real-time updates along the way.

The drive will demonstrate the unique capabilities of the Volt, the only electric vehicle that can operate under a full range of driving conditions and climates without limitations or driver concerns of being stranded by a depleted battery.

“This drive is a demonstration of the freedom the Volt will provide customers – freedom to drive where you want, when you want,” said Tony DiSalle, director of product marketing for Chevrolet Volt. “Whether you are driving 50 miles or 1,750 miles, the Volt is the only electric vehicle that can be a family’s primary car.”

Fans can follow the Volt’s journey on Chevrolet’s various social media properties, including the Chevrolet Volt Facebook, the @ChevyVolt Twitter account, the Chevrolet Posterous page, and the ChevroletVoltAge.com page, where viewers will find photos, videos and text updates on the Volt’s location and performance. The team will be using the hashtag #VoltDrive during the event.

Over the course of the four days, the Volt will stop in Little Rock, AR on July 1; Nashville, TN and Roanoke, VA on July 2; Washington, D.C. and Frederick, MD on July 3; Philadelphia, PA and finally, New York City on July 4.

The “Freedom Drive” will demonstrate Chevrolet Volt’s unique capability of driving approximately 40 miles as a pure electric vehicle, with a total driving range of 340 miles, with electricity powering the car at all times and speeds. For trips of up to 40 miles, the Volt gets it power solely from electricity stored in its 16-kWh lithium-ion battery. When the Volt’s battery runs low, a sophisticated engine-generator seamlessly engages to extend the driving range to about 300 miles on a full tank of gas.

According to AAA, the Volt will join approximately 34.9 million travelers crossing the country to celebrate the 2010 Fourth of July holiday. AAA predicts that automobile travel will continue to be the dominant mode of transportation, with travelers taking trips at least 50 miles away from home.

The company is accelerating the national launch of the revolutionary electric vehicle in response to intense interest in the Volt from customers across the country. Today’s announcement brings the initial Volt retail markets to seven, including California, Washington D.C. and Michigan. The retail launch in Texas and New York will begin with Austin and New York City in late 2010. Chevrolet dealers in the balance of Texas and New York, as well as New Jersey and Connecticut, are scheduled to begin receiving Volts in early 2011.

Volt production begins late this year at GM’s Detroit-Hamtramck facility. Pricing has not been announced.