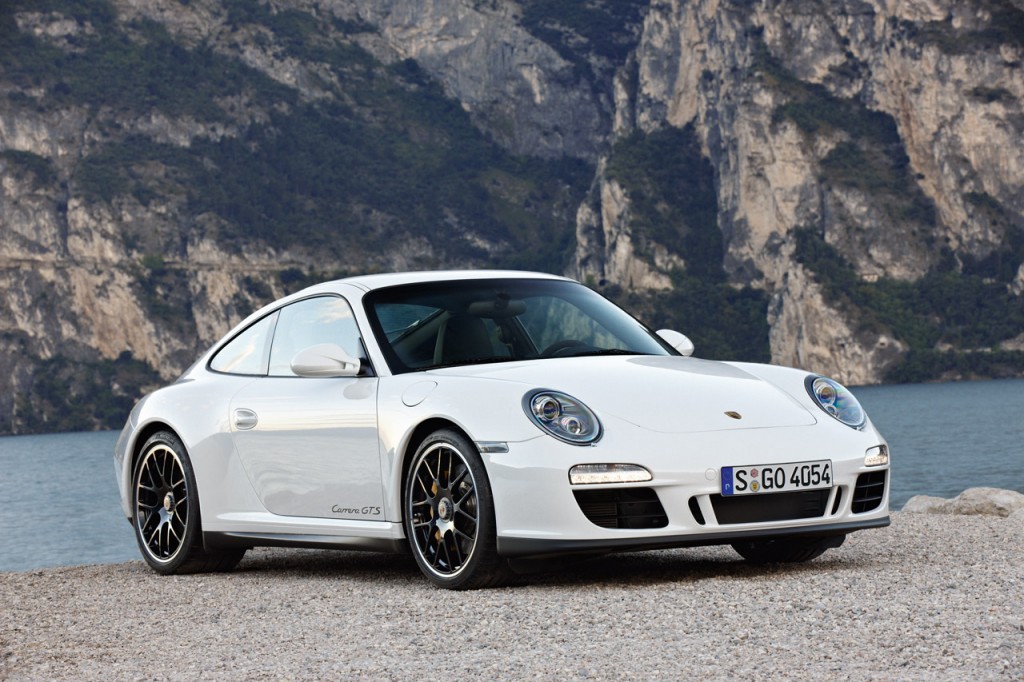 Looking for a compromise between a Porsche Carrera S and the Porsche GT3? Then the new 2011 Porsche 911 Carrera GTS may be the answer. The new sexy hips flowing around classically-styles curvaceous sheet metal taken from the Carrera 4 outlines the new Carrera GTS sheltering a 3.8-liter flat-six putting out 408 horsepower and 310 pound-feet of torque. Better yet, that peak power delivery happens about 200rpm sooner than it does in the Carrera S. This power, 23hp more than the standard S and 27hp less than the GT3, gets directed to the rear-wheels through a standard 6-speed manual or an optional 7-speed PDK transmission.

The Porsche Carrera GTS, to distinguish it from everything else, comes with a new set of 19-inch center-hub RS Spyder wheels, exclusively designed front and rear fascias and black Alcantara interior trim.

ATLANTA – September 15, 2010 – With 408 horsepower (hp), outstanding vehicle dynamics and additional standard equipment, the new 2011 911 Carrera GTS ascends to the pinnacle of the Carrera model lineup. With 23 hp more than the 911 Carrera S, the new GTS – available as Coupe and Cabriolet – narrows the gap between the Carrera S and the 435 hp 911 GT3. The additional sportiness goes hand in hand with an economic advantage: thanks to Porsche Intelligent Performance, as the new sports car consumes no more fuel than the 911 Carrera S. It also provides comprehensive list of additional standard equipment. The 2011 Porsche 911 Carrera GTS will celebrate its world premiere at the Paris Motor Show in early October.

Unique within the Carrera family, the 911 Carrera GTS combines the 44 millimeter wider Carrera 4 body of the AWD models, including a wider rear track and wheels, with rear-wheel drive. There are many more details which distinguish the appearance and technology of a GTS from other Carrera models, for instance, the GTS runs on 19-inch center-mount RS Spyder wheels, painted black, with high-gloss rim flanges and 305/30 R 19 tires on the rear axle.

Other visual features include the SportDesign front apron with black spoiler edge, special sideskirts, also in black, and the Carrera GTS logotype on doors and rear lid, in black or silver depending on the body color. The area between the two tailpipes in the rear is also black. In combination with the standard interior color “black Alcantara”, the center sections of the driver and passenger sport seats are covered with black Alcantara and the high-quality Alcantara is also used wherever driver and passenger come in direct contact with the interior, like on the rim of the new three-spoke SportDesign steering wheel and on the gear and handbrake levers.

Detailed attention was paid to the intake and exhaust functions in the 3.8-liter flat-six engine that now delivers 408 hp: A special resonance intake manifold featuring six vacuum-controlled tuning flaps switch between power and torque-optimized geometry compared to the Carrera S power unit with only one tuning flap. This allows for increased torque in the mid-rev range. Maximum torque of 310 lb. ft. (420 Nm) is unchanged, but is available at 4,200 rpm; 200 rpm earlier when compared with the Carrera S. Additionally, a sport exhaust system with two dual-tipped tailpipes with their outer shells painted black with polished inner tubes comes standard.

The Carrera GTS comes standard with a six-speed manual transmission with the seven-speed Porsche Doppelkupplungsgetriebe (PDK) available. In comparison with the Carrera S, top track speed for manual transmission Coupe rises by two mph to 190 (306 km/h). Acceleration from zero to 60 is 4.0 seconds for the GTS Coupe with PDK and Sport Chrono Package Plus. And the new Carrera GTS will offer fuel economy of up to 19 mpg city / 27 mpg highway.