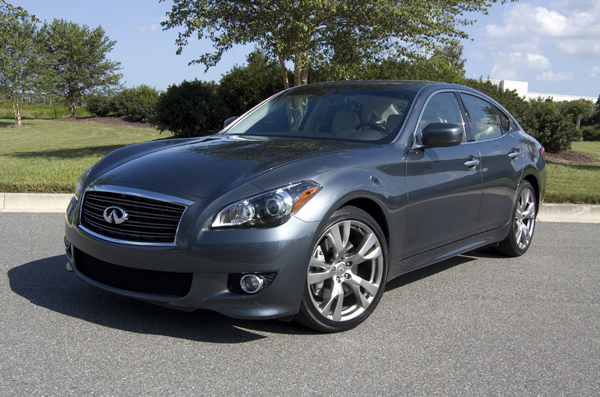 Infiniti has aimed to please the luxury car buyer and has succeeded with the new Infiniti M56. Over the years Infiniti has made their mark in the automotive luxury brand market incorporating advanced technology mixed with superb performance. The 2011 Infiniti M56 is nothing short of this formula and is a worthy contender when put up against the best that the luxury market has to offer.

We have been patient as far as getting our hands on the 2011 Infiniti M, which offers a M37 version with the VQ series V6 engine, that we have grown to love in other Nissan/Infiniti products, or the M56 that uses an all-new 5.6-liter V8. The V8 pumps out 420 horsepower and 317 foot-pounds of torque. Those power numbers gave our M56 test car the agility to run with some sports cars while leaving the driver confident at any speed. The standard suspension setup on our M56S (S=Sport Package version) was dialed in just right giving you the necessary amount of firmness in the turns while smoothing out ruff highway roads.  The optional 20-inch wheels wrapped in 245/40/20R tires did add some harshness when navigating through broken pavement. 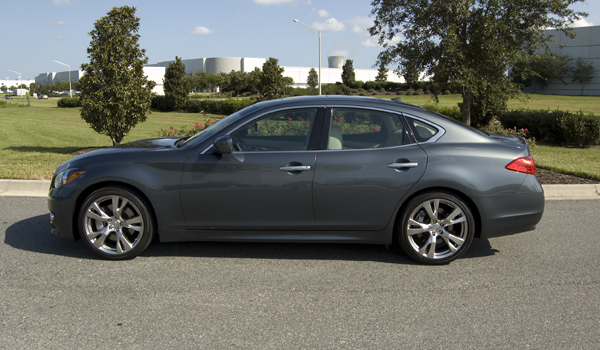 The Infiniti M56, for the amount of power that it produces, returns very decent gas mileage. Considering how many other V8 powerplant offerings from other manufacturers do not get highway mileage figures anywhere near the M56’s 25mpg number let alone 16mpg in the city. Nissan/Infiniti has done its homework when it comes to the engineering of the new 5.6-liter V8.  Smooth, refined and somewhat economical.

The M56 is probably one of the more responsive large luxury vehicles you can buy in its price range. On the highway the M56 just wants to go and you always have power on tap due to the advanced 7-speed automatic transmission. The transmission has 4 different modes, snow, eco, normal and sport. In sport mode the transmission attempts to predict and learn your driving habits and actually keeps a gear for a while when it senses that you want to get down and dirty. Normal mode is, well, normal with the exception of it learning your driving style as well. Eco mode is less apt to jump to a higher gear under moderate acceleration keeping the RPMs at a low gas sipping level. Snow mode incorporates low torque transfers, anything to keep those rear tires from spinning out of control on slippery surfaces, without the traction control system working overtime. 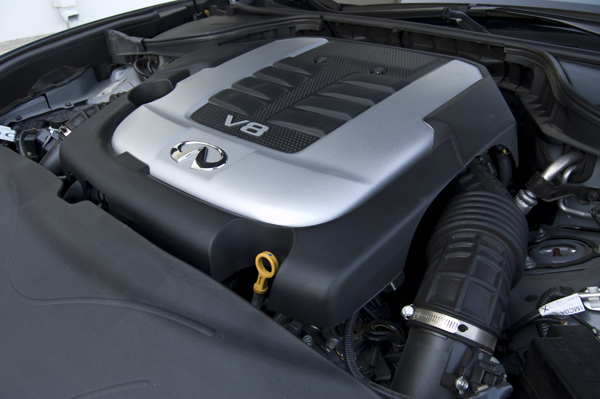 Outside of the Infiniti M you will find curvaceous sheet metal that is a total revamp from the outgoing model. The M37 and M56 carry a new modernized look that Infiniti shares throughout its lineup giving their brand more character recognition. The Infiniti M37 and M56 look great especially when fitted with the optional 20 inch alloy wheels. The hood lines are similar to the M’s smaller G series siblings while the interior somewhat takes a path of its own. 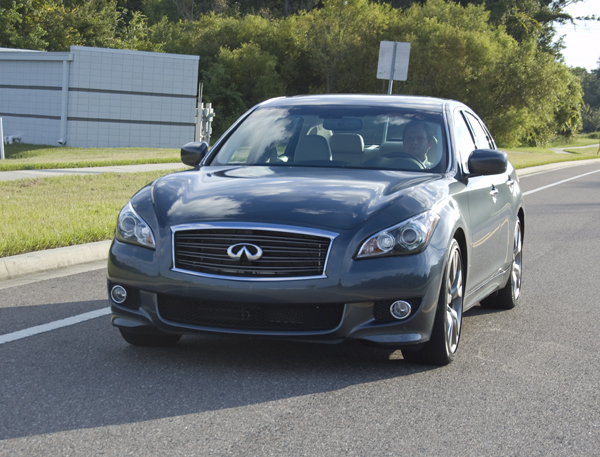 Inside of the Infiniti M56 you will find a layout that is different most of the other line of Infiniti vehicles. I am not sure if this is such a good thing. The only good I could see out of this is that it differentiates the M from other Infinitis. This is where I start to wonder what Infiniti was attempting to pull off when the button layout under the navigation screen gets washed out in the sunlight while other Infiniti interior layouts seem to be designed specifically to avoid that situation. The instrument cluster is also slightly different in design on the M56 when compared to other Infiniti cars. The interior of the M56 is still very pleasing because it is laced with techie gadgets that make the driving experience more enjoyable. 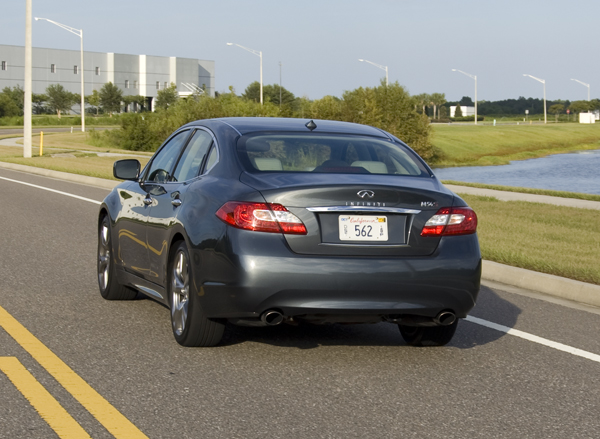 Technology has come a very long way in the automobile and Infiniti is one of the front runners in incorporating new innovative creature comforts such as the Forrest Air system which is part of the Sport Touring Package on our M56 test vehicle. Personally I believe the Forest Air system to be more of a novelty than something that is actually useful. At times you do feel and extra breeze of air from the vents but it is rather unnecessary when you are attempting to regulate an attained comfort level during a long journey.  Another new advancement that Infiniti offered for the M56 is the 4-Wheel Active Steer which can really boost the steering sensitivity. Once again, I could do without this feature as it does take a while to get used to the vehicle turning in a few times faster than any other vehicle that we have driven in the past. 4-Wheel Active Steer ‘actively’ controls the angle of steering not only with the front wheels, but the rear wheels are able to turn-in up to 1 full degree. You can think of the system giving the rear-end a temporary tow alignment on the fly when you are turning the vehicle. It is a great innovation for parking in tight spaces allowing the car to ‘swing around’ more-so than one without the system. 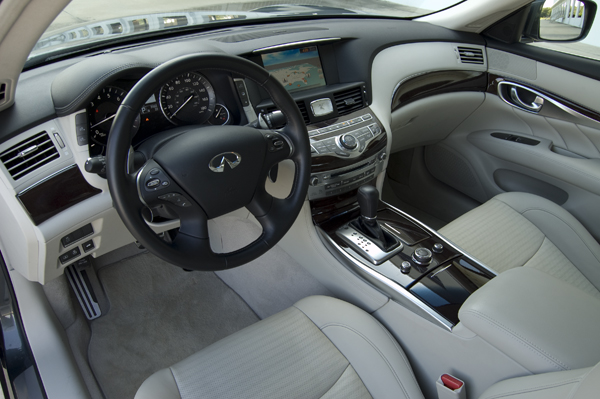 The Infiniti M56 comes standard with one of the best satellite navigation systems on the market from an auto manufacturer.  Voice activation is almost a no-brainer guiding you step-by-step to help you get to your next destination. Bluetooth handsfree and streaming Bluetooth audio also work well with a variety of cell phones including the new iPhone 4.

Overall the Infiniti M56 is a sexy looking beast that keeps its composure buried underneath all of the techie gadgets. Our test Infiniti M56 stickered for $64,980 which includes the Sport Touring Package, Sport Package and illuminated kickplates. Before you decide to spend a 10 to 20 large more on that Benz or Lexus, you may want to take a look at what Infiniti has to offer in the M56.