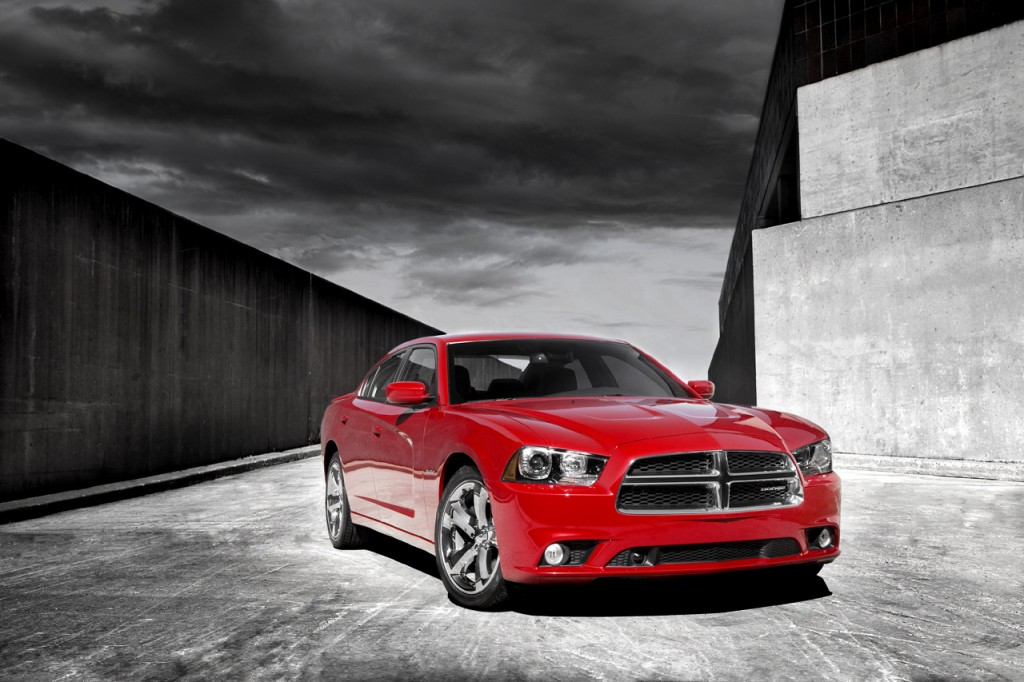 The new 2011 Dodge Charger redesign has been officially revealed showcasing a more bulging front fascia with a totally revamped rear end that’s inspired by the classic 1968-1970 Charger. The new rear end is what makes the new Charger something old while at the same time something new with its massive tail light assembly composed of 164 LEDs.

Powertrains choices for the 2011 Charger will be the 5.7-liter HEMI V8 or the Pentastar 3.6-liter V6. An all-wheel-drive option will be available in the R/T trim. Expect slightly better fuel economy numbers in the new 2011 Charger when it reaches dealerships nearing the end of this year.

The efficient and aerodynamic exterior of the 2011 Dodge Charger is spiritually inspired by the iconic second-generation Charger from the late 1960s, featuring a design that is sure to strike an emotional chord with Dodge performance enthusiasts of all generations.

With its sinister “ready to attack the road” face, the all-new Dodge Charger puts the world’s best E-segment sedan competitors between its new “split crosshair” signature grille. Its sculpted all-new body is a conscious nod to its deep heritage and muscle-car roots. The Charger’s profile is also a modern affair, a result of countless hours in the wind tunnel, from its lower hood line, faster windshield and radically raked back headlights to its tighter wheel openings, lower sill and race-car-like flat underbody, the Charger effortlessly cuts thought the air with its attitude intact. The aluminum hood features dual “scallops” that bring a sculptured, performance look to the front end, while large body-side scallops deliver a striking undulating A-line across the doors. Running front to rear is the iconic horizontal “coke bottle” or “double-diamond” body-side styling that creates a tapering silhouette accented with muscular front and rear fenders and gives the Dodge Charger one of the most distinct profiles on the road. Defining the fastback’s wide stance is an all-new signature taillamp design that incorporates 164 illuminating LEDs to form its signature “racetrack” graphic and gives the new Charger its unmistakable character from blocks away.

As the Dodge brand’s flagship, the chassis of the all-new 2011 Charger is designed, engineered and fine-tuned to deliver a level of quality, capability and refinement that rivals the very best European, Asian and North American E-segment sedans. With its new second-generation E-segment rear-wheel drive (RWD) architecture, Dodge Charger features world-class suspension-tunings with re-designed geometry making for a nimble, balanced chassis that will build the Charger’s legend as one of the best driving sedans in the world.

The all-new 2011 Dodge Charger R/T with all-wheel-drive (AWD) features a re-thought stance and 19-inch wheels to make it much more appealing than ever before. The AWD preserves the Charger’s character and deepens its performance envelope in the most treacherous conditions. The Charger AWD features a segment-exclusive active transfer case and front-axle disconnect system to improve fuel economy by up to 5 percent. No other major automotive manufacturer offers the combination of these two independent technologies. Dodge Charger’s innovative AWD system seamlessly transitions between RWD and AWD with no driver intervention. When all-wheel drive is not required, the system automatically disconnects the front axle to maximize fuel economy while still providing the outstanding performance and handling inherent in rear-wheel drive vehicles.

The all-new 2011 Dodge Charger features more than 65 safety and security features, including standard Keyless Enter-N-Go and Electronic Stability Control (ESC) with segment-exclusive Ready-alert Braking and Rainy Day Brake Support safety features to improve overall vehicle handling and performance both on and off the track. Safety and security features available for the first time on the Dodge Charger include adaptive-cruise control (ACC) with forward-collision warning (FCW), blind-spot monitoring (BSM) with rear cross path (RCP) detection and ParkView™ rear back-up camera with grid lines, all designed to provide the driver with added confidence while behind the wheel.

Built at the Brampton Assembly Plant in Brampton, Ont. (Canada), the 2011 Dodge Charger arrives in showrooms in the fourth quarter of 2010.