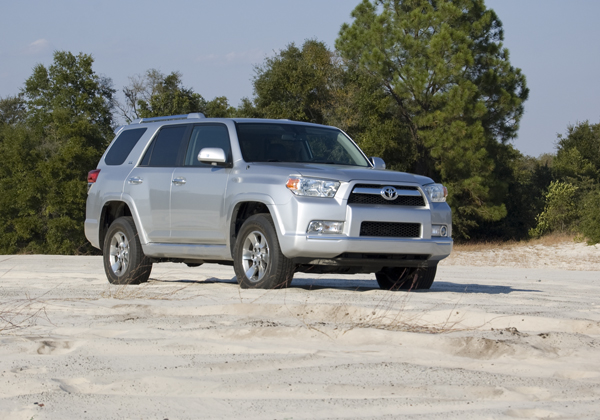 Toyota continues a long tradition by building the iconic 4Runner for those who need an off-road capable SUV that also provides comfort and long-term reliability. The Toyota 4Runner, originally based on a pick-up truck chassis, was first introduced in 1984 and continues to be one of the longest lasting on the road today in terms of dependability.

To keep a ‘good thing’ going, Toyota has decided to do what they know best which has shaped them into the company they are today. For the 2010 model, Toyota has redesigned the 4Runner line without much of a compromise. Although for 2010 and 2011 the V8 engine is no longer available, it leaves room for the current V6 to shine and it does in the area of improved fuel economy and decent power delivery.

2010 model 4Runners have a 157 horsepower and 178 foot-pounds of torque 2.4-liter inline 4-cylinder engine standard on entry-level SR5 2WD models, which is not much to write home to mom about in the area of performance. The 4cyl engine gets a decent 23mpg on the highway and puts the 2010 4Runner’s starting price at just over $27K. In my opinion the 4cyl option is more of a numbers game than one that would satisfy the consumer who wants to take a 4300-pound SUV off-road. Lucky, for 2011 Toyota dropped the standard 4cyl engine in place of our test vehicle’s 4.0-liter V6, which produces a good 270 horsepower and 278 foot-pounds of torque. We think this is a sufficient amount power for the 4Runner while it gets a decent 22mpg on the highway and 17mpg in the city, just one mpg less than the 4cyl. 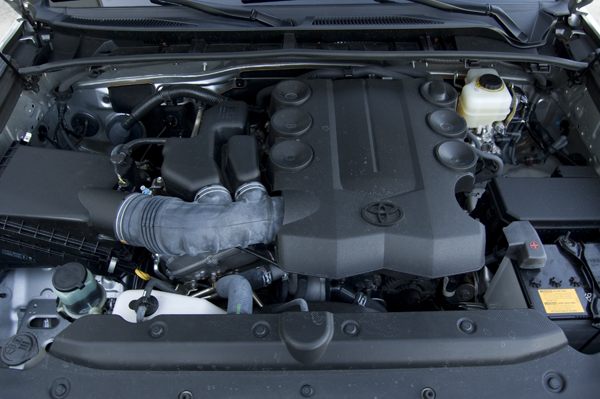 Aside from what is under the hood of the new 4Runner, it is a well-constructed vehicle with a good track record as it has been for almost 3 decades now. The 4Runner is unmistakable for being an off-road capable utility vehicle with is traditional boxy body that remains to retain that ‘classic look’ from many years ago. Some of the styling cues of the new 4Runner, such as the boxed headlights and taillights, can be found in other Toyota vehicles including the 4Runners smaller crossover car-based sibling, the Highlander. 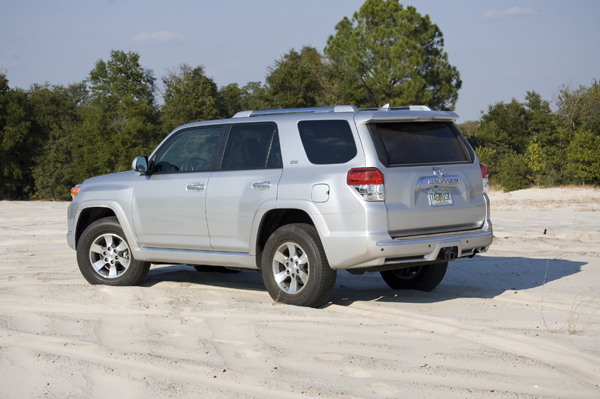 To be a body-on-frame design, the new 4Runner drives near car-like on the highway. Although the suspension could use some stiffening to eliminate that rocking effect and help the 4Runner corner a little better, it still however manages to stay somewhat composed in most normal road-driving situations. A tighter suspension would also reduce the massive body-dive under heavy breaking. If the 4Runner is ever pushed near the limit you will know it before you enter into the danger zone because its stability control comes on early in an attempt to reduce the risk of rollover. At times on the road the 4Runner does feel like you can easily roll it over but it is not suggested that you prove this theory true. 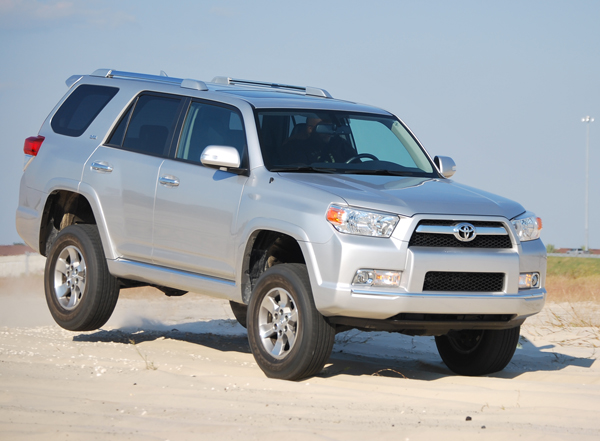 Off-road is where the 4Runner feels right at home. We took our 4Runner out to the local sand dunes without any very high expectations. To our surprise we never got stuck by taking advantage of the 4Runner’s part-time 4WD with Hillstart and Downhill assist. Shifting the vehicle into 4WD-Low further improved our efforts in climbing steep sand hills and safely descending on the other side of the dunes. Some people may ask why manufacturers still build vehicles like this because they think they will never take them off-road. But we know better, there are still some people in this world with some excitement in their lives and that is why the 4Runner is in existence. 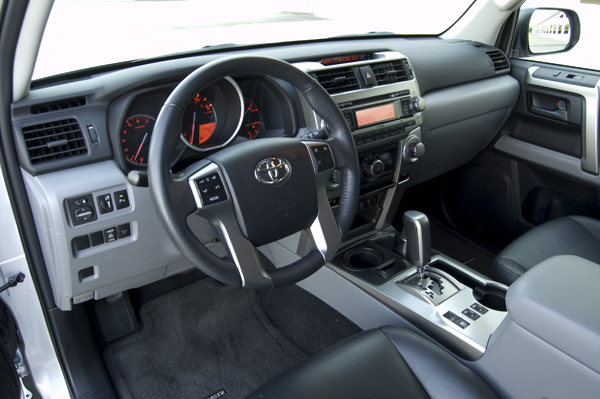 Inside the 4Runner is a redesigned interior. Various knobs for the HVAC and stereo controls feature large rubber grips. The seats are firm with a synthetic feel to the leather. Steering has a relatively light feel making parking and off-road navigation easy. Rear cargo room is ample with room to spare. We even like the idea of the sliding rear cargo deck that allows you to load up to as much as 400 pounds on it. The rear door carries over the roll-down power window that previous generation 4Runners had making it literally a breeze on those hot summer days.

There is plenty of desirable competition in the 4Runner’s class but the 4Runner still boasts a rugged appearance that masks a proven build quality with a quiet and comfortable ride. 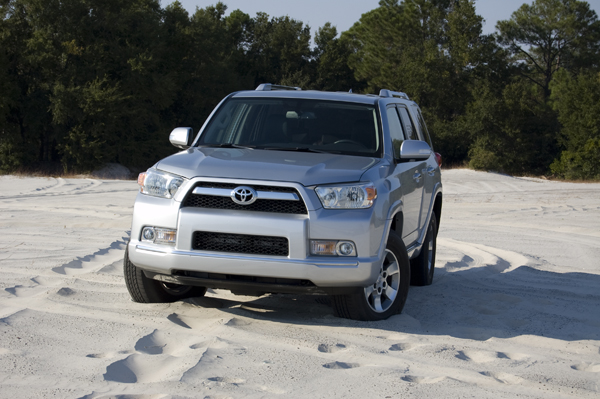 Our 4WD SR5 4Runner was equipped with a premium package, backup camera, sliding rear cargo deck, upgraded stereo with Bluetooth audio streaming and sunroof. With this set of options it brought the price to just $36,596. If you have a chance, check out the new 4Runner and let us know what you think about one of the most capable off-road SUVs to come out of Japan.