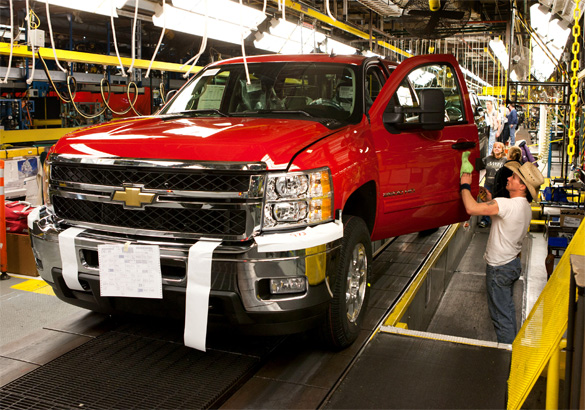 A Silverado on the line in Flint. Image: © GM Corp.

It wasn’t too long ago that all the news related to U.S. automakers was negative. Things have changed in recent months, and GM is now the second of the big 3 U.S. automakers to announce significant hiring plans for the immediate future. General Motors announced on Monday that they would be adding a third shift to the Flint Assembly plant, which builds both the GMC Sierra and the Chevy Silverado heavy-duty pickups. The third shift is scheduled to begin in the third quarter of 2011, with workers arriving for training in the second quarter.

The additional shift is in direct response to customer demand for heavy-duty pickups, which are used for both commercial and recreational purposes. Flint Assembly currently employs nearly 2,100 hourly and salaried workers, and already ramped up production of pickups in 2010. The additional 750 jobs are badly needed in Flint, whose economy is even more decimated that that of Detroit. GM operates an additional four plants in the Flint area, including Flint Engine Operations, Flint Metal Center, Flint Tool & Die and the Grand Blanc Weld Tool Center.