The awards were selected in part of being “the most outstanding vehicles of the year based on factors that include innovation, design, safety, handling, driver satisfaction and value for the dollar.” For a shot at the title, eligible vehicles must be “all-new” or “substantially changed”. 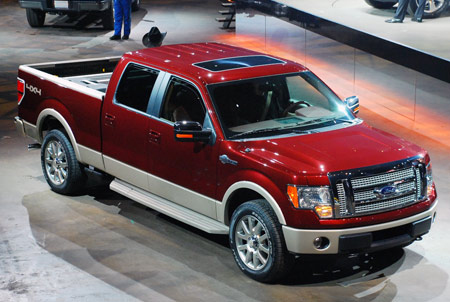 Ford must be very happy to hear this in being one of America’s Big 3 that has been in the news for the past several months in talks about THE BAILOUT. Hyundai has to be very proud of the major accomplishments over the past few years in jumping over hurdles that were owned by foreign car makers such as Toyota and Honda. With the new accomplishments we can look forward to everyone else catching their breath in the ultimate automotive race as we embark on a new technologies to carry us into the fuel efficient future.

2009 North American Car and Truck of the Year Winners Announced

The awards are designed to recognize the most outstanding new vehicles in their segments.

The awards are based on factors that include innovation, design, safety, handling, driver satisfaction and value for the dollar. Because the vehicles are new, reliability is not a factor.

The awards are unique in the United States because they are given by automotive journalists who represent magazines, television, radio, newspapers and web sites instead of a single publication. Also, unlike some other awards, the awards are financed entirely by the jurors.

The winners were announced today at a news conference at the North American International Auto Show in Detroit, however, the show does not give the awards and the voting does not take place there.

Today was the first time a Korean automaker has won.

Today was the fifth time Ford has won the North American Truck of the Year and the third win for the F-150. The other winners were the Expedition and Escape Hybrid.

To be eligible, vehicles must be “all-new” or “substantially changed”
from the previous model. This year the jury considered more than fifty 2009 vehicles and settled on 14 cars and 11 trucks that deserved to be on the ballot.

Michelle Collins, Vice Chairman Automotive at Deloitte & Touche, was responsible for counting the ballots, which jurors sent directly to the accounting firm. Until the news conference Ms. Collins was the only person who knew the winners.

* Hybrids have been honored twice.

Here are the vehicles on which the jurors voted:

More information on the awards — including the names of jurors as well as previous finalists and winners — is available at:
www.northamericancaroftheyear.org.