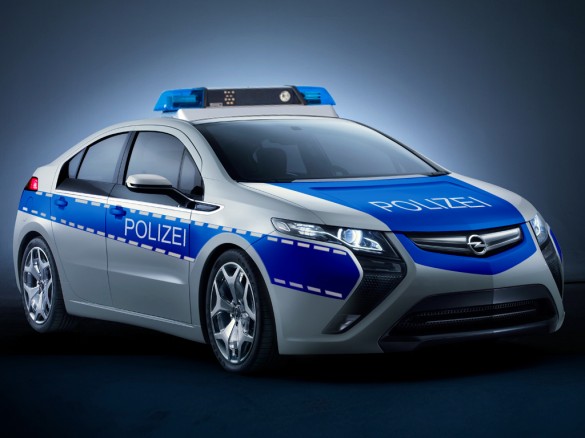 The above image comes courtesy of Opel Germany, who thinks it may be a good idea to produce the Opel Ampera (the EU’s Chevy Volt) in a police version. Starting at a price just below $58,000, that’s going to be a tough sell even in Green-obsessed Germany. As much as I was impressed by my time with the Volt, I’m pretty sure that it would have too many limitations to be a functional police cruiser, even if you used it exclusively in urban environments. First there’s the issue of the Ampera’s range; if the standard car’s range is impacted by using things like the radio, climate control and headlights, how do you think a version equipped with strobes, a light bar, more (high wattage) radios, electronics and siren would fare? Would an EV range of 20 miles be acceptable to police agencies, even if the car could still be driven via the gasoline generator? When do police cars at busy departments get enough down time to effectively charge the batteries?

Then there’s the whole matter of acceleration and top speed. The Volt was, admittedly, quicker than I expected it to be, but it’s still no match for anything with sporting intentions. Its top speed of 100 miles per hour is good enough for congested city streets, but it simply won’t cut the Sempf on the Autobahn. Even the Germans will have a hard time embracing a “green” police car with limited battery range and an economy car top speed. I wish Opel Germany a lot of luck with their sales efforts on the Ampera Polizei, because they’re certainly going to need it.