The Ford Taurus SHO has always had understated looks. Part of the sporty sedan’s appeal was that it didn’t look as fast as it really was, going all the way back to the car’s initial launch in 1989. When Ford launched the latest version of the Taurus SHO in 2010, some critics called it’s appearance bland, or too much like the other models in the Taurus lineup. Understated is one thing, but boring is something else entirely, so Ford has made some revisions to the Taurus SHO for the 2013 model year. Gone is the current car’s chrome grill, replaced by an aggressive looking black grille trimmed in chrome. The previously rounded front fascia gets an edgier look, complete with a black lower grille and black plastic fog lamp surrounds. The blacked out treatment extends to the rocker panels and side view mirrors, and even wraps around the lower rear fascia. The look is distinctive without being flashy, and I give Ford two thumbs up on the new SHO’s styling. 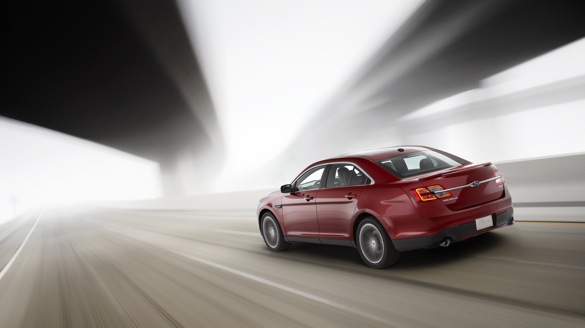 The current AWD drivetrain and 3.5-liter EcoBoost V-6 remain, but that’s not a bad thing. The EcoBoost V-6 produces 365 horsepower and really does pull like a V-8, even from down low. Instead of tweaking the engine or drivetrain, Ford chose to focus their efforts on improving the SHO’s handling, so the car gets bigger brakes, torque vectoring control to mimic the effect of a limited slip differential, improved paddle shifters and new electric power steering. Just in case you want a more hard-core SHO, Ford has you covered with a newly announced SHO Performance Package, designed with track days in mind. Buyer who opt for the Performance Package get a sport-tuned suspension with unique shocks and springs, track-tuned calipers with high performance brake pads, recalibrated electric steering, Electronic Stability Control with “Track” and “Full Off” modes, 3.16:1 final drive for quick acceleration, extreme-duty cooling and 20” wheels with high performance, summer-only tires. Pricing for the new Taurus SHO hasn’t been set, but you can expect to see it in dealer showrooms by mid 2012.