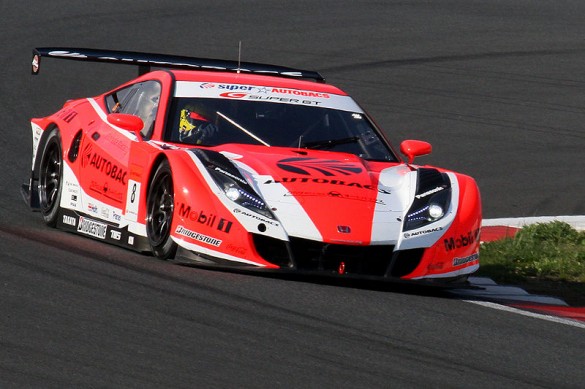 A Honda HSV-010 in the Super GT series. Image: Morio

During a press conference at the Shanghai Auto Show, Honda’s president, Takanobu Ito, confirmed what car enthusiasts the world over have hoped for: Honda will build a successor to the legendary NSX. Depending upon your perspective, that’s where the good news ends. While Ito insists that Honda is “working very hard on it”, he gave no indication of what “it” is, where “it” will be sold, when “it” will be released or even what price segment Honda is targeting for “it”. Worse, another Honda representative said the car would be positioned as a high performance counterpart to the CR-Z, a car which only Honda bills as a “sports hybrid”. The NSX replacement is believed to be a parallel hybrid, but Ito would only say that the car would be both exhilarating to drive and environmentally friendly.

The original replacement for the Honda NSX was to be a V-10 powered, front-engine, rear drive coupe putting out some 500 horsepower. Production was killed by Honda in the midst of the global economic meltdown of 2009, but the car went on to race in Japan’s Super GT series as the HSV-010 GT.

Whatever the new NSX replacement morphs into, Honda needs to take a step back and examine what’s most important. If that’s green cars, give up on the idea of building a world class sports car. If you want a high performance halo car, scrap the parallel hybrid drivetrain and focus on a smaller displacement engine with direct injection, variable intake and exhaust cam timing and twin, sequential turbos to get reasonable performance and fuel economy. Trying to serve two masters well is an impossible task, and there’s a reason why no one makes turkey giblet gravy flavored ice cream.