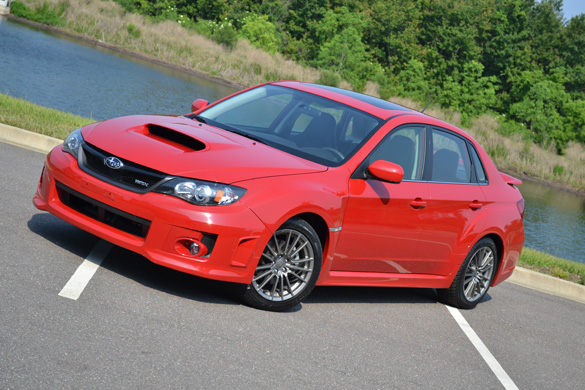 For years the Subaru WRX has been that ‘street-racer’ or import tuner car that some automotive enthusiasts had ‘performance envy’ over. That envy rooted from the thought of an inexpensive all-wheel-drive Japanese grocery-getter having a competitive performance edge over every-day cars just like their $60K+ sports car only for half the price. For 2011 Subaru continues that tradition in an evolutionary design that followed the current WRX hatchback but in a sedan form factor.

Subaru remains to be a leader in providing affordable vehicles built around a boxer engine and a proven symmetrical all-wheel-drive system. This combination lowers the center of gravity for better handling and initially directs power to all 4-wheels in a 50/50 torque split between the front and rear axles. The new 2011 WRX has a little something to offer everyone, from a base 2.5-liter non-turbo 170 horsepower model all the way to the down-and-dirty performance oriented WRX STI touting 305 horsepower. I had the chance to test drive the new Impreza WRX Limited edition, which is the middle of the line. It features basically the same flat-4 2.5-liter only tuned to 265 horsepower and 244 pounds-feet of torque with the help of a little forced induction. 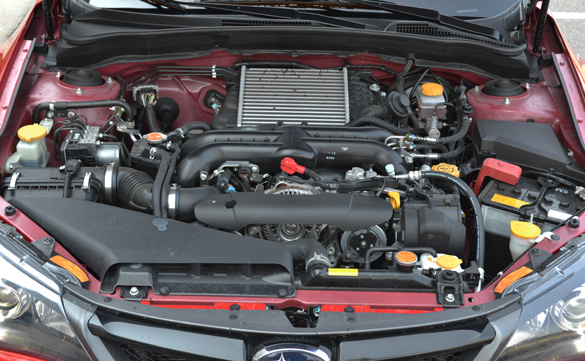 My 2011 Subaru Impreza WRX Limited reminds me of the days that I drove a Honda Prelude SH. Street racers developed a temporary state of whiplash every time they heard my aftermarket exhaust buzzing by their ear. If I had this WRX, I would have been king of the streets with an ego bigger than the semi-truck sized turbo on my buddy’s 1000+ horsepower 1994 Toyota Supra. All without adding a single modification to my WRX. That says a lot about the Japanese engineering that has been molded over the years. Conceiving such a vehicle that rolls off of an assembly line already competent around an autocross track, while remaining practical for getting groceries with the family.

Today, when an automotive enthusiast sees an older WRX or WRX STI rolling down the road, it is usually followed by a distinctive purring-rumble that is accustomed to its flat-4-cylinder engine. The new 2011 Impreza WRX Limited is no different, with a rather loud quad-tipped exhaust note from the factory. At times driving my WRX test vehicle, the muffler tone resonated through my chest just like a pair of nicely tuned 15-inch subwoofers would in the trunk. 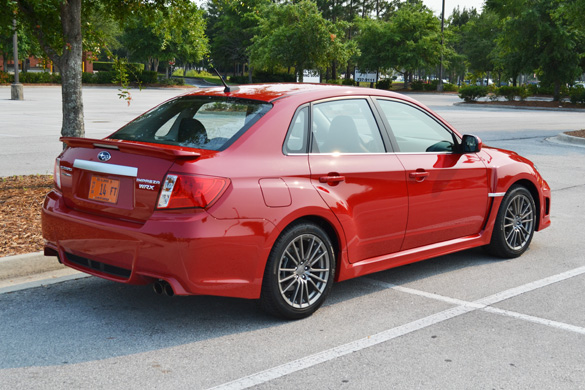 Subaru didn’t take the direction of making their popular WRX soft, but instead built off of what has worked since the WRX’s introduction in 1992. The rally car characteristics still are still very alive in the new 2011 WRX. Driving the new Impreza WRX is fun and puts a smile on your face when you are able to launch the car forward from a dead-stop in a fashion unattainable by most cars on the road today. It can be truly exhilarating to drive the new WRX in addition to rowing through all 5 forward gears on an adept gearbox. On my test vehicle the clutch pedal required a bit of extra effort, possibly due to a heavier pressure plate. Oddly enough after jumping into a new WRX STI the clutch felt totally different and much softer than my test vehicle. Either way, both the STI and my WRX test vehicle drive like a champion road-going rally car. 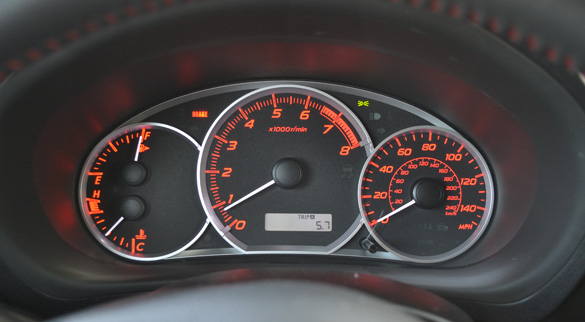 Inside the new 2011 Subaru WRX you will notice a slight carry-over interior setup from older models. The dashboard, all-plastic, does not come off looking overly cheap due to the subtle raised molding. Things are kept simple and functional in the cabin of the WRX. The leather-trimmed performance designed seats are very supportive but do not breathe well in the summer heat. The integrated navigation, stereo, Bluetooth system is unfortunately complex and would be an option that is easy to sway away from. Especially if you could possibly save about $2,000 by passing it up. The unit leaves a lot to be wanted in terms of easy usability and its graphical interface especially when it is touch-screen based.  Not to mention, the stereo sounds bad with hardly any functional bass. You might as well let the exhaust note fill-in for your bass and let the hum of the flat-4 be your daily commute entertainment. 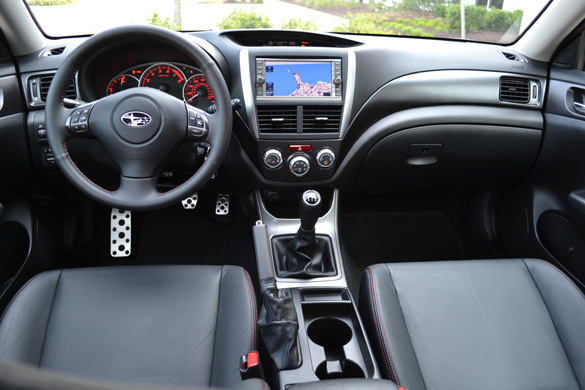 Safety has always been a prime objective of Subaru even before the days of traction control, tire pressure monitoring, HID headlights, vehicle dynamic control and even advanced airbag systems with side curtains which are all standard equipment on many cars sold today. The symmetrical all-wheel-drive system is one additional standard benefit of the WRX that adds to the safety factor.
The economic side of the new Impreza WRX can be a bit inconsistent, but attainable with some light right-foot driving. My best MPG figure for my time in the new WRX was about 22mpg. Because the WRX is such a blast to drive, getting the EPA estimated 25mpg on the highway would be nail biting. The WRX gets 19mpg in the city which I had no problem matching. 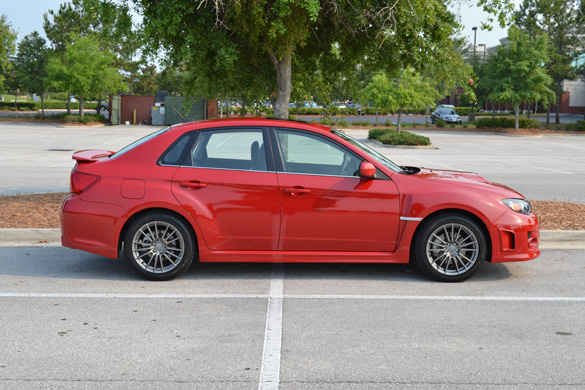 Over-all ride and comfort is decent, considering the forgiving long traveling suspension. The WRX is a car that you would not be afraid to take off-road. I was so preoccupied with having fun on the road I ran out of time and eventually gas too. The 2.5-liter turbocharged boxer engine is eager to rev into the high RPMs. You get a massive surge of power above 4500 RPM and you better be quick on the shift or you will surely hit the rev-limiter in the blink of an eye if you are not paying attention. All-wheel-drive will ensure that you are not barking the wheels even if they are snow tires on dry pavement. 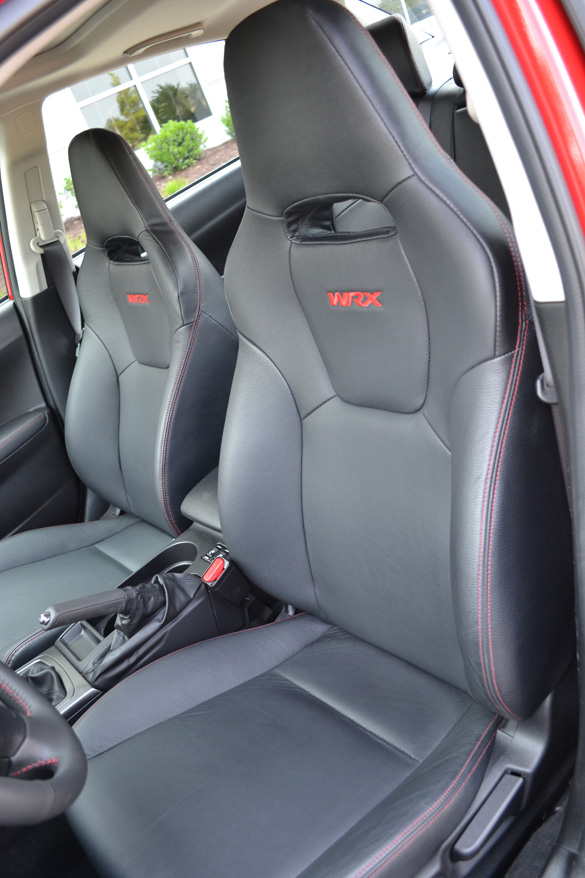 Rally inspired yet road-capable in virtually any situation you can throw at it on paved surfaces. That is the 2011 Impreza WRX in a nutshell, which is something that is still desired by not only diehard automotive enthusiasts, but those looking for economical, functional, and fun transportation.