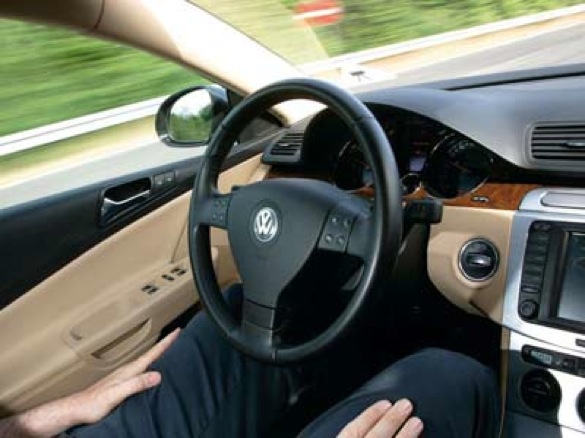 It’s not quite the same thing as Google’s driverless cars, but it’s a whole lot closer to being a reality: Volkswagen has demonstrated a working prototype of a technology they call “Temporary Auto Pilot.” Using a combination of adaptive cruise control and lane-keeping assist, cars equipped with Temporary Auto Pilot will follow the posted speed limit, maintain a safe distance to the car in front of them and stay centered within their lane, even on curves. It will function at speeds up to 80 miles per hour, but also works in stop and go traffic (which makes it ideal for rush-hour commuters).

The difference between Google’s driverless car concept and VW’s Temporary Auto Pilot is that the VW system still has the driver responsible for the vehicle. Specific details weren’t given, but it’s likely that VW requires the occasional driver input to avoid sounding an alarm. It may allow you to glance at your e-mail behind the wheel, but I wouldn’t plan of taking a nap on your way to work just yet.

The system is still in the developmental stages, but it’s based on existing technology that could be implemented in the near future. Whether that’s good news or bad news depends entirely on you perspective.