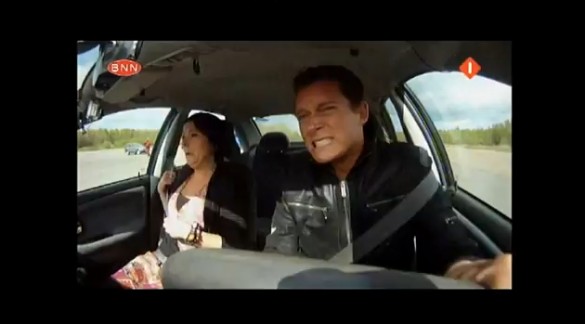 We’re not sure who thought it would be a good idea to run the worst drivers in the Netherlands through a series of driving challenges on a reality TV show, but you know that wasn’t going to end well. In the video below, the task seems fairly simple: accelerate to 80 kph (about 50 mph) and brake hard at the last minute to avoid hitting the styrofoam block wall. At no time did the instructions include, “veer off course, hit someone’s personal car and run down the show’s host,” but that’s exactly what happened. See the carnage for yourself in the video below, and we’d love a translation (and a better explanation) from any of our Dutch readers.

Motor Authority reports that the driver, Pim, mistook the gas for the brake, and matted the accelerator instead of stopping the car. We have no idea why he turned to look at the rear seat passenger when he was supposed to be hard on the brakes, and we suspect that may have had an effect on his less-than-stellar performance. And you thought all the bad drivers in the world came from the United States.