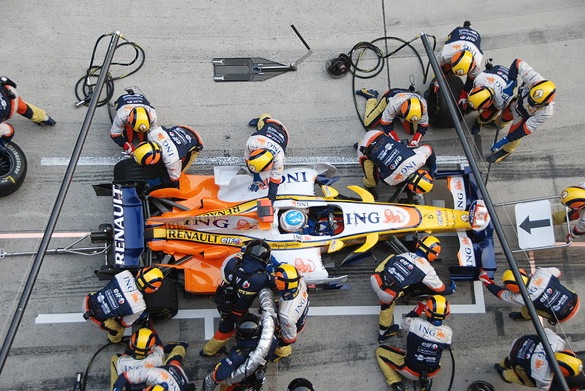 The green movement may be in its infancy in the United States, land of the SUV and the open road, but it’s been a hot topic in Europe for years. Everything from political campaigns through Autobahn speed limits have been influenced by the Greens, and even the highest form of motor racing isn’t immune from their reach. In 2014, F1 will switch from the current 2.4-liter V-8 formula, with a redline of 18,000 RPM, to a 1.6-liter turbo V-6, limited to 15,000 RPM. Since forced induction is allowed, performance will likely remain on par with today’s cars. Other changes, though, take a turn for the weird.

Beginning in 2014, cars can only use battery power on pit row. Per the 2014 FIA rulebook, “The car must be run in electric mode (no ignition and no fuel supply to the engine) at all times when being driven in the pit lane.” The change will require cars to have on-board starters, and larger Kinetic Energy Recovery Systems will be needed to provide pit lane power. Other changes will allow teams to recover energy from exhaust gasses, although the methodology isn’t exactly clear.

Call me a cynic, but I see this as nothing more than “look at me” marketing hype for Formula 1. How much fuel will really be saved by requiring battery power on pit lane (which already has a reduced speed limit for safety)? How much greenhouse gas will the FIA keep out of the atmosphere by such an absurd rule?

In the end, this change will have very little impact on the environment, but it will have a big impact on the fans and the sport. No one wants to hear a multi-million dollar golf cart exit the pits, especially when there isn’t any tangible environmental gains to be had.