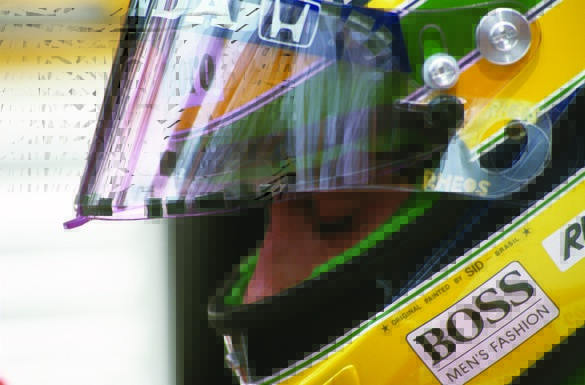 Ayrton Senna da Silva died on May 1, 1994, when his Williams Renault left the track and hit a concrete barrier at the Tamburello corner during the San Marino Grand Prix. Officially, the accident happened when Senna’s car, on cold tires and a full fuel load, bottomed out and momentarily lost traction. Although the car left the track at almost 190 miles per hour, Senna had slowed the car down to 135 just before the moment of impact, and his Williams hit at what appeared to be a glancing blow.

If you’ve seen the crash, it strikes you as unremarkable; many drivers have walked away from far worse impacts. For Senna, it was not to be; the Brazilian driver, who many consider to be the greatest F1 driver of all time, was killed by blunt force trauma from the impact of the right front wheel against his helmet, coupled with two penetrating head wounds from suspension uprights. If Senna was a legend during his career, he’d become the closest thing to racing’s patron saint after his death.

Trying to capture the essence of a personality like Senna’s is near impossible. Those close to him considered Senna to be almost a force of nature, not just another headstrong athlete. He was a driver that physically could not accept losing, and his battles with other stars of the era (especially Alain Prost) are the stuff of legend.

“He never wanted to beat me,“ Prost said of Senna, “he wanted to humiliate me. He wanted to show the people he was much better.”

Of their on-track rivalry, Senna had a different perspective, saying, “All drivers go for their limits. My limits are different from Prost’s.”

If you ever saw Senna race, chances are you’ll do everything in your power to see his biopic, “Senna,” now in limited release nationwide. If you never saw the complete mastery that Senna displayed on a wet racetrack, or his utter indifference towards anything but crossing the finish line first, the movie is a look into an era of Grand Prix racing that’s come and gone. Today’s drivers have talent, but Senna was the last of the Formula One giants, who put everything on the line each and every time they strapped into a race car.

For dates, showtimes and cities, check out the official “Senna” website.