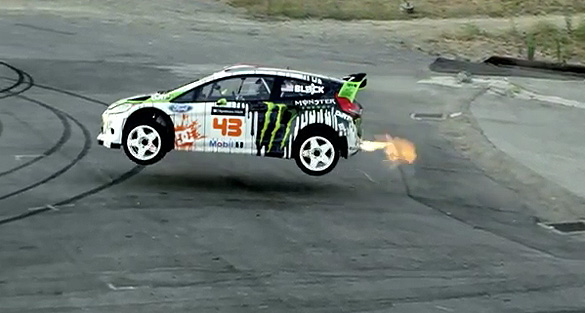 Here it is, what you have all been waiting for, Ken Block in the new Gymkhana FOUR; The Hollywood Megamercial. Hit up the jump for some serious hoon action like you have never seen before… well, sort of!

Ken Block pulls out all of the stunts in the latest Gymkhana FOUR and he is on FIRE, literally. What did you expect? After the previous 3 Gymkhana infomercials, Ken Block and his cronies had to take it up a notch. So sit back, relax and enjoy the epic proportions of hoonary dished out by the one and only, Ken Block.

Universal Studios Will Never Be The Same

August 16, 2011 – Huntington Beach, CA – Today DC and Ken Block released the
highly anticipated Gymkhana FOUR video on YouTube.com. Ken Blockʼs Gymkhana
FOUR: The Hollywood Megamercial takes production and concept to the next level,
surpassing all of the previous films in Block’s hit viral series, which have amassed over
110 million views to date. In line with the style of Ken Blockʼs Gymkhana TWO: The
Infomercial, this video, which was filmed at Universal Studios Hollywood, brings focus
back to high production camera work, 1000 fps slow motion, plus a bit of comic relief.
From robotic sharks, deranged zombies, stunt men in gorilla suits, and massive
pyrotechnics to intense, 100-percent raw, flat-out driving and copious amounts of tire
smoke, Ken Block and his Ford Fiesta Hybrid Function Hoon Vehicle (H.F.H.V.) bring the
magic of Hollywood and gymkhana together.

Known as the place where movie magic begins, Block took over the backlots of
Universal Studios Hollywood, converting them into a giant playground for GYM4. Filmed
over the course of five days, iconic movie locations and backdrops provided real-world
obstacles, which increased both the danger and difficulty of the course and tricks.
“With each Gymkhana film, we’ve raised the bar, making it tougher and tougher to outdo
ourselves,” said Block. “So we opted to go over the top on FOUR with a big Hollywood
production and Universal Studios provided the perfect place for it. The backlots provided
real life obstacles, plus an extremely varied collection of settings all just minutes from
each other. Without question, Gymkhana FOUR is the most ridiculous film we’ve done
yet, but itʼs also packed with some of the hardest and most dangerous driving I have
done in these films.”

Paying homage to iconic Hollywood movies, the video opens with Block and his H.F.H.V.
blazing through the War of the Worlds set. He drifts past the famous clock tower from
Back to the Future and screeches through Psychoʼs Bates Motel. Block and his H.F.H.V
then proceed to rip through Whoville, coming face to face with Jaws. The video wraps
with the perfect movie star ending and a surprise Bollywood tribute that could make
Slumdog Millionaire pant.

Block and his team brought out the big guns on Gymkhana FOUR by joining forces with
famed director Ben Conrad and his production company LOGAN, one of the most
respected Hollywood production houses in the business. Known for his work on
Zombieland, famous iPod commercials, and most recently as title designer on 30
Minutes or Less, Conrad had a distinct vision and plan for the Gymkhana FOUR video.
Conrad utilized the most innovative technology in cameras, lighting and effects, including
a revolutionary GoPro array camera setup that was custom fabricated to allow multiple
GoPro cameras to be strung together to shoot footage in unison, creating a Matrix-style
bullet time effect.

“The Ken Block Gymkhana videos have become a viral phenomenon, so we really
wanted to take it even further and blow everyone away with this video,” said Jeff Taylor,
VP of Marketing at DC. “That’s why we brought on Ben and his team at LOGAN. They
are known for their cutting edge approach and using the most advanced filming
technology. The level of production on Gymkhana FOUR is unparalleled. Between
LOGAN’s film editing, Block’s skills, and Universal Studios, Gymkhana FOUR is above
and beyond what everyone is expecting.”

Every Hollywood action star needs a great sidekick and in Gymkhana FOUR, Blockʼs is
none other than his new 2011 Ford Fiesta H.F.H.V, a unique race car built by the
Monster World Rally Team to be transformed for Block to compete in Stage Rally,
Rallycross and Gymkhana. For this film, the H.F.H.V. was putting down 600hp and
665lb-ft of torque through a custom 6-speed sequential gearbox thatʼs mated to a
mechanical all-wheel-drive system. At only 2,755 lbs, the H.F.H.V. does the sprint from
zero to 60 in an astonishing 1.9 seconds, giving McFly’s DeLorean a serious run for its
money to 88 mph.

Fellow YouTube sensations and friends, Epic Meal Time-ranked no. 14 on YouTubeʼs
most subscribed to videos list-also make a hilarious cameo in the video. The Epic Meal
Time guys actually set the bacon down for a moment as Block tears through their set
drifting around the kitchen. Epic Meal Time also filmed the teaser for GYM4 which can
be viewed at
http://www.youtube.com/watch?v=b2DMPNtPK84.

Featured in the opening credits, the Ken Block Teamworks Collection is a character of its
own, putting the Megamercial in GYM4. Making their debut for the first time, the KB
Spartan Mid, the KB Summit Jacket, and the KB Stripe Hat were designed specifically by
Block for the launch of Gymkhana FOUR and will be available online as of mid-August.
Originally created in 2005, the Teamworks Collection and design inspiration stems from
Blockʼs rally and gymkhana car liveries. For more information and to check out the entire
Ken Block Teamworks Collection, please visit
http://store.dcshoes.com/family/index.jsp?categoryId=4374337.

The DC x Ken Block Gymkhana franchise of videos is one of the most successful viral
video contents ever produced from the action sports, footwear and auto industries. Since
the first Ken Block Gymkhana Practice video was released in 2008, the Ken Block
Gymkhana video series on YouTube has gained over 110 million views worldwide and
has won ten prestigious viral video awards. The Gymkhana THREE video reached 1
million views in less than 24 hours after being unleashed on the public, creating a bona
fide YouTube phenomenon.

About DC: Founded by Ken Block and Damon Way in 1993, DC quickly grew to a leader in performance skateboarding shoes and renowned action sports brand. Today DC stands as a global brand whose product line has expanded to include menʼs, womenʼs and kidsʼ skateboarding and lifestyle shoes, apparel, snowboards, snowboard boots, outerwear, and accessories. As one of the cornerstones of its marketing strategy, DC has built a world-class team of professional skateboarding, snowboarding, surfing, BMX,
motocross and rally athletes that exemplify and enhance DCʼs brand, develop its signature products, and support its promotional efforts. DC is a subsidiary of Quiksilver, Inc.

About Ken Block: Ken Blockʼs rally career began in 2005. His skill and car control became quickly apparent and Block aptly nabbed Rookie of the Year in the Rally America Championship. Since then, Block has continued to race in the series, boasting a healthy number of podium appearances, as well as X Games medals. In addition to his performance in the car, Block has been a driving force in shedding light on the sport within the United States. Block co-founded DC Shoes, a worldwide leader in performance skateboarding shoes and a renowned action sports brand. His keen branding and marketing acumen not only elevated DC to their current eminent status, but has allowed Block to achieve global fame as a national rally driver through his wildly successful viral video campaigns. Ad Age named his “Gymkhana TWO” the No. 4 Viral Video of 2009. In January 2010, Block signed with Ford Motor Company to campaign both the
Rally America series and the World Rally Championship, being the first American to do so.