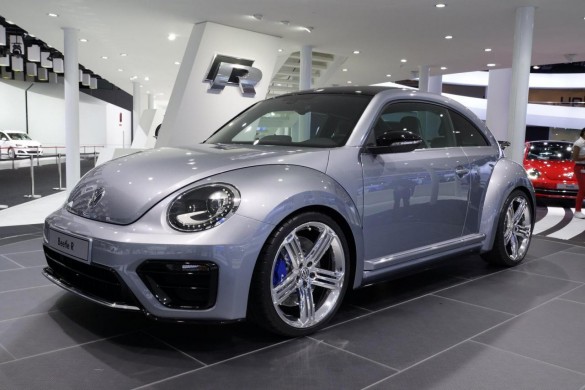 Could a man be proud to drive the new Volkswagen Beetle R Concept? From the new aggressive front fascia and 20-inch alloy wheels to the integrated rear diffuser and four-tailpipe exhaust, the new VW Beetle R Concept looks to be a mean machine.

Let’s be honest for a minute, the latest outgoing generation of the Beetle proved to appeal more-so to the female crowd. The Beetle still had its fair share of guys that proudly drove the latest iteration of a truly classic German automobile. With the introduction of an aggressively styled VW Beetle R Concept at the Frankfurt Motor Show this week, it begs to gain some interest from male automotive enthusiasts. Not to mention, the new Beetle R Concept is powered by a 2.0-liter turbocharged TSI 4-cylinder hinted to have similar performance numbers of the Golf R and Scirocco R which are currently unavailable in the states.

Inside of the VW Beetle R Concept are Nappa leather upholstered deep bucket sport seats. The gauge cluster gets special R-specific treatment as well as its integrated auxiliary gauges.

So far there is no word on VW bringing the VW Beetle R Concept, dubbed “The Beetle as a sports car”, to the states as a production model. We suspect the Beetle R would have a better chance on making it across the pond into the hands of American automotive enthusiasts than the Golf R and Scirocco R ever did.

Hit up the current press release on the new Volkswagen Beetle R Concept appearing at the Frankfurt Motor Show below.

The Beetle as sports car:

Beetle R Concept has customised front and rear sections and 20-inch wheels
Sport seat system of Beetle R Concept is upholstered in luxurious Nappa leather
Wolfsburg / Frankfurt, September 2011. At Volkswagen, the letter “R” as an added identifier promises top-notch performance. Currently, this claim is being validated with turbo pressure by the Golf R (199 kW / 270 PS) and Scirocco R (195 kW / 265 PS). In a world debut at the IAA, Volkswagen is now showing a third variation of this sporty theme: the Beetle R Concept. It is based on the 21st Century Beetle. Like the Golf R and Scirocco R, the R version of the Beetle was also created at Volkswagen subsidiary Volkswagen R GmbH located near to Wolfsburg. The Beetle R Concept is still a design study. Those who are familiar with the Beetle 2.0 TSI (147 kW / 200 PS) know the dynamic potential of this new car. As an “R”, the Beetle could demonstrate a performance potential similar to that of the Golf R and Scirocco R.

Visually, the Beetle R Concept, painted in “Serious Grey”, offers a glimpse of what a production version might look like. Outside, the concept is equipped with 20-inch “Talladega” alloy wheels – the same design used on the Golf R and Scirocco R. However, 18- and 19-inch wheels are mounted on those cars. Easy to spot on the Beetle’s wheels, which feature 5 triple spokes, are the blue brake callipers in R design.

Designers completely redesigned the front and rear bumpers that were widened by 30 mm. In front, the bumper module practically consists of 3 air intakes, which are styled in contrasting “Black High Gloss”. The middle air intake supplies the engine with oxygen, while the outer two contribute to cooling the brakes. The front spoiler, also painted in “Black High Gloss”, is designed as a flat splitter (with a chrome strip); splitters of this kind are typically used in motorsport. To maintain temperature regulation of the engine within an optimal range, even under extreme conditions, ventilation slots are found on the right and left sides of the engine bonnet.

The rear bumper also has air slots – air exhaust vents – that are integrated in the aerodynamic concept of the Beetle R Concept. There is also a diffuser that is integrated in the lower bumper area. Together with the rear spoiler – which is significantly larger than the production models with up to 200 PS in power – and its black trailing edge, ideal downforce values are attained at the rear axle. A visual and acoustic highlight is the exhaust system with its 2 sets of dual chrome tailpipes.

On each side, the bumpers transition into the free-standing wings; they were also widened: 15 mm per side. The side sills are styled in “Black High Gloss”; a high-end chrome trim strip is incorporated here. Also painted in “Black High Gloss” are the roof, the upper part of the bootlid connecting to it, the door mirror housings and door handles.

As is usual on R models, the interior also makes a customised and sporty impression. In the front, the driver and passenger sit in motorsport shell seats with what are referred to as Ergopads made of gray nubuck leather. The seats are upholstered in black Nappa leather. Embossed on the seats is the R logo. The seat seams and piping are in the colour “Space Blue”.
The contrast colour “Black High Gloss” that was already used on the exterior is used in the interior as well, such as for dashboard accents and decorative elements around the gear shift grip. Interior designers also styled the instruments to be R-specific. The central instrument cluster (tachometer in the middle, in the style of a sports car) and the auxiliary instruments laid out above the centre console are both modified here. The door sill plates are upgraded with the R logo. Meanwhile, brushed aluminium is used for all pedal caps. Matching the seats with their blue piping are the fabric floor mats with their blue-black double borders.