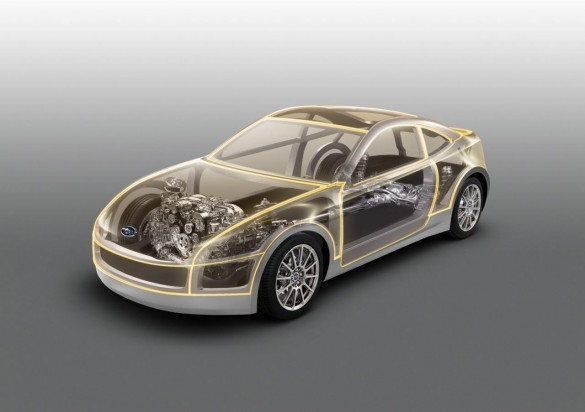 Subaru’s FT-86 (Scion FRS) equivalent is reportedly set to debut at the upcoming LA Auto Show in November. The exterior sheet metal of the Subaru BRZ Concept will be mostly unrelated to the actual production version when it hits the floor of the LA convention center.

As we have reported previously, the Subaru BRZ will be jointly-developed with Toyota’s FT-86 (Scion FRS in the USA) and share virtually identical chassis and powertrains. Powering the BRZ and FT-86 will be a 2.0-liter direct-injected boxer 4-cylinder engine with 200 horsepower mated to a 6-speed manual or 6-speed automatic.

The “real” look of the BRZ will not be revealed until the Tokyo Motor Show when we should expect the Scion FRS to show its true production face. Also reported recently, the Scion FRS (Toyota in other world markets) variation will be a de-contented version when compared to the Subaru BRZ featuring more standard equipment.

Both vehicles will have a center of gravity lower than most exotic and sports cars currently on the market making it a true competitor on the track against other vehicles in its class.