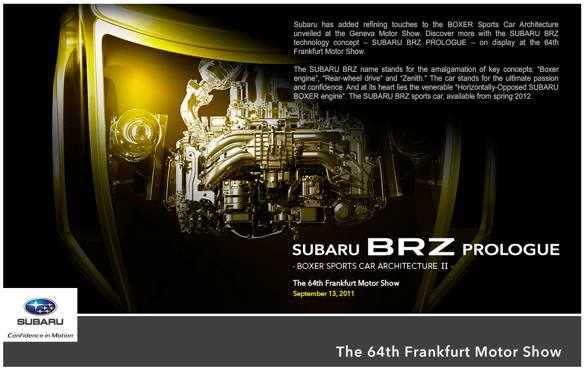 Both the Toyota FT-86 and the equivalent product from Subaru remain vaporware, but at least we now know what Subaru will call their version of the front engine, rear drive sports coupe. Ahead of the Frankfurt Motor Show, Subaru has announced the new car will be called the “BRZ,” short for Boxer engine, plus Rear wheel drive, and Zenith (to denote a high point of Subaru’s sports car evolution).

If you’re looking for a production version to be shown at Frankfurt, you’re in for a serious disappointment. Subaru will show a “technology concept” in Frankfurt, in much the same way that Toyota / Scion has been showing “styling exercises” of their version for the past two years. There’s no further detail on what will power the car (aside from a Subaru-built boxer engine), or whether or not an STI version is in the works, but Subaru says that production will start in the spring of 2012. Assuming they can keep that deadline, that means the car will hit U.S. dealer showrooms sometime next summer.

If you want further detail (and there isn’t much available), Subaru has set up a microsite dedicated to the BRZ concept to be shown in Frankfurt.