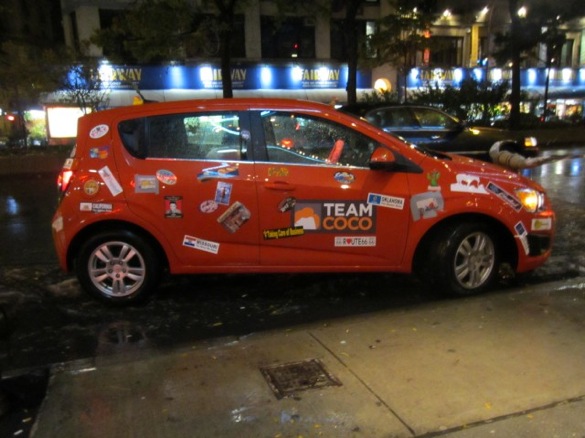 Chevrolet really, really wants Millenials to love the 2012 Chevy Sonic. To prove the car is hip, Chevy’s sent it bungee jumping and skydiving, although the Sonic ad didn’t actually show the “specially modified” car after it landed in the desert. As Chevy points out, the new Sonic will hit 60 miles per hour in less than half a second, but only when you drop it out of a plane.

Chevy’s latest marketing stunt for the Sonic involves comedian and Conan O’Brien sidekick Andy Richter. To promote Chevy’s newest subcompact, Richter drove his “Orange Bullet” from Los Angeles to New York, a distance of some 3,000 miles. Here’s the catch: he only got three days to do it.

I love a road trip as much as the next guy, and I’ve driven the country from end to end one more than one occasion. Doing it in three days, in a subcompact car (no matter how nice it is on the inside), pegs the suck-o-meter. If you want to see how Richter fared along the way, he’s got video logs up on the Team Coco website, or you can tune in to tonight’s Conan O’Brien show for a recap.