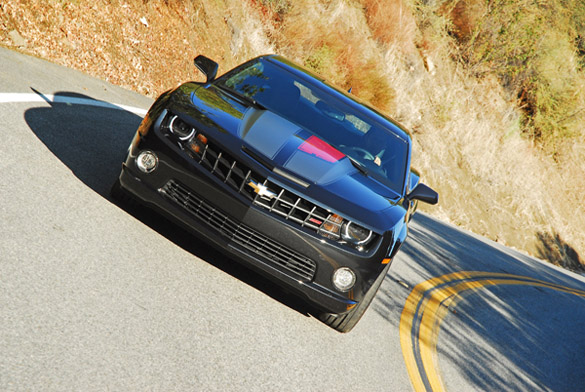 Chevrolet celebrates 45 years of Camaro production with this very special, limited-production 2012 45th Anniversary model.  It’s a ‘black tie’ celebration because each anniversary model is custom painted ‘Carbon Flash Metallic’ (black with hints of dark green), and includes a unique rally stripe in red and silver with 45th Anniversary graphics on the stripes.  Also included are special fender emblems celebrating the 45 years of production, a new 20X8 and 20X9 inch wheel design in deep silver, RS-style taillamp lenses, a standard rear spoiler, standard HID headlamps, body-color roof molding, leather-trimmed front bucket seats with the Anniversary Logo embroidered on the seatbacks, a white instrument panel with the 45th Anniversary logo on the right side, white door trim inserts with green glowing LED ambient piping at night, red, white and blue stitching on the seats, and the Anniversary logo on the bottom of the leather-wrapped/tilt/telescoping steering wheel and sill plates.  Chevy wants all who gaze at this beautiful sports coupe to know that it celebrates 45 years of Camaro production.

But that is not all, the new 2012 is more refined and the 3.6 liter Direct Injection V6 model, also available with the Anniversary Package, is more powerful now pumping out 323hp, is 20.5lbs. lighter and helps maintain fuel economy of up to 30mpg highway.

More refinement is found on the instrument panel appearance with new instrument graphics and trim, as well as a new steering wheel design and a power lift feature for the front passenger seat.  The steering wheel features a fresh new look and ergonomic improvements intended to support performance driving.  Also new is a Rear Vision Package, which adds a rearview camera system and an auto-dimming mirror to the existing rear park assist feature.  The rearview camera system complements the rear park assist by providing a video display of the area behind the car, with the video images appearing in the car’s inside rearview mirror. 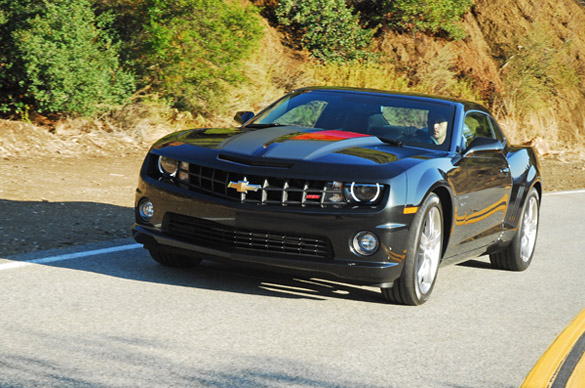 I tested the SS model with the 6.2 liter, all-aluminum V8 engine that generates a whopping 426hp at 5,900rpm and 420lb.ft. of torque at 4,600rpm.  When you turn the engine own you’ll hear the Chevy rumble coming from the dual exhaust system.  Plant you foot down on the floor board and the engine will sound like a banshee breaking from captivity.

Mated to the reliable and proven Tremec TR6060 six-speed manual transmission that is designed to handle the high torque characteristics of the LS3 engine.  Short throws and smooth engagement and a standard limit-slip differential guarantee quick 0-60mph times well under 5-seconds.

The fully independent suspension is racecar bred and precise and quick acting.  Just a little tug of the steering wheel changes your direction.  Up front is a 4.5-link system that includes a unique L-shaped upper control arm that attaches to the knuckles at one end and incorporates a ride bushing in the rear.  The setup also includes a retuned dual ball strut system with a direct-acting 23mm solid stabilizer bar.  The rear setup includes coil-over gas-charged monotube shocks with a decoupled 24mm solid stabilizer bar.  The front and rear stabilizer bars are reshaped and positioned outboard of the shock mounts for more effective body control and more precise response. 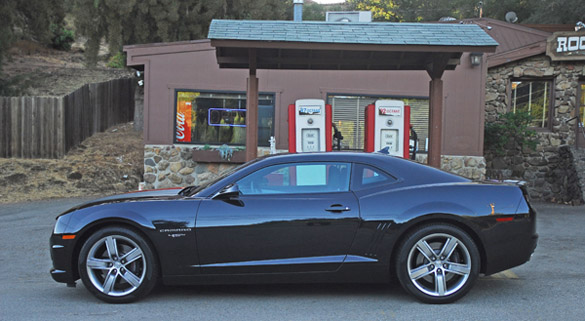 The power-assisted rack & pinion steering system is super responsive to my steering wheel inputs and pointed my new Camaro SS where I wanted it to go.  It features a 16.1:1 ratio for quick acting.  Keeping me out of trouble when challenging steep curves is the standard StabiliTrak electronic stability control system.

Quickly slowing the new Camaro SS down from speed are giant, power-assisted steel disc brakes with Brembo aluminum calipers.  Up front are 14 inch vented discs clamped with four-piston calipers, and 14.4 inch vented discs clamped with four-piston Brembo calipers in the rear.  Standard ABS keeps you in control during severe braking maneuvers or when braking on slick or wet pavement. 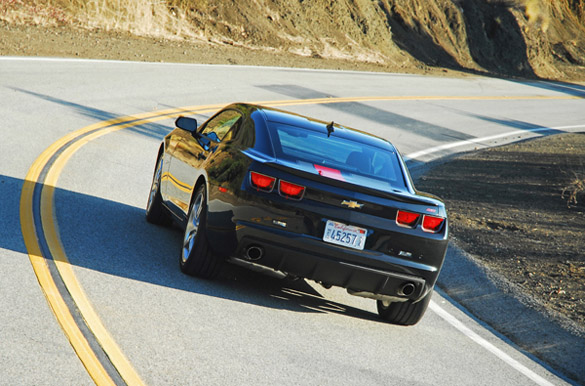 The cockpit is perfectly designed with easy to read and use gauges, dials, switches and levers, all fully illuminated for safe nighttime travel.  The shifter is perfectly placed so you can easily grab it and keep your right hand on it during your drives without fatigue.

The front power-adjustable bucket seats are very comfortable and supportive for short or long drives.  The center stack is easy to reach and easy to use with two big dials.  There is plenty of legroom and headroom to let you stretch out when you need to. 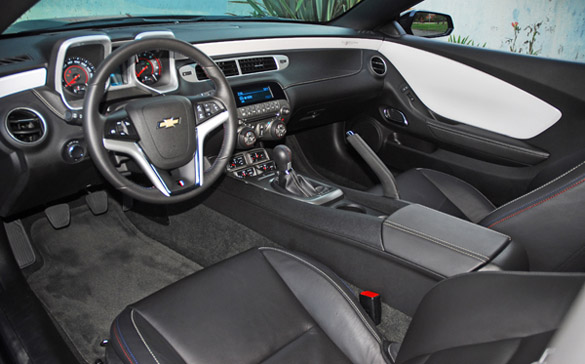 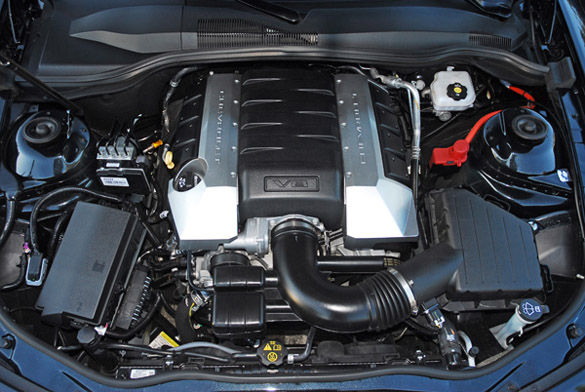 If you are a Chevy Camaro enthusiast this is the model for you to proudly drive this 45th Anniversary Edition around town or on the back roads and truly enjoy the power, performance and interior refinements that make the all-new Chevy Camaro SS one of the great sport coupes in the world.