Will Dodge Drop The Challenger From Its Lineup In 2013? 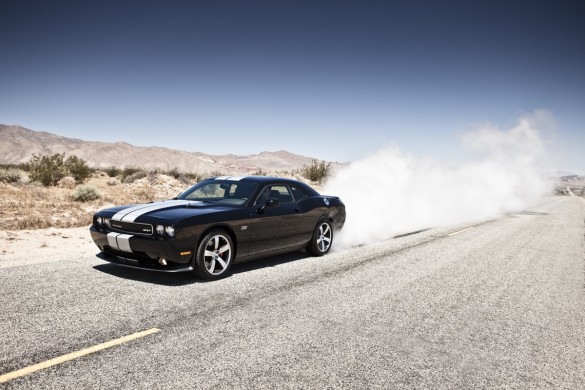 If you’re in the market for a pony car, it’s easy to overlook the Dodge Challenger. In SRT8 form, it’s more expensive than a Mustang GT or a Camaro 2SS, and it’s a noticeably larger car. That’s a plus when you’re on a long-distance roadtrip, where the big Dodge swallows miles like a sumo wrestler downing a plate of freshly-rolled toro maki. It’s a big minus when it comes to things like track days, where the super-sized Challenger just can’t keep up with its pony car rivals.

The Challenger’s platform, which came from Mercedes-Benz and also underpins the Dodge Charger and Chrysler 300, is also getting up in years. With new CAFE standards looming on the horizon, Chrysler may not be able to justify three XXL, Hemi-powered muscle cars. That’s why rumors of the Challenger’s potential demise don’t surprise us all that much.

Motor Trend is reporting that the Challenger could be dropped from the Dodge lineup after the 2013 model year, replaced by a new front-engine, rear-drive pony car called the Barracuda. It would be smaller and lighter than the current Challenger, and could even share a platform with a range of Alfa Romeo coupes and sedans. It would also revive a legendary brand, even if the nameplate’s originator (Plymouth) has been resigned to the dustbin of automotive history.

What Chrysler would use to power the car is anyone’s guess. Dropping in the 6.4-liter Hemi V-8 from the current Challenger would make a smaller car far too nose-heavy, and it wouldn’t do much to bring up Chrysler’s fuel economy numbers. Ditto with its existing 5.7-liter V-8, which seems to call for an entirely new V-8 engine. Unless, that is, Ford and Chevy go the forced-induction V-6 route for future Camaros and Mustangs, in which case expect the same from Chrysler.

We’re fans of the current Challenger, but we don’t love it enough to want one in our garage. A smaller, more sporting rear-drive coupe from Chrysler would certainly be interesting to us, especially if it’s priced on par with the Mustang and Camaro.