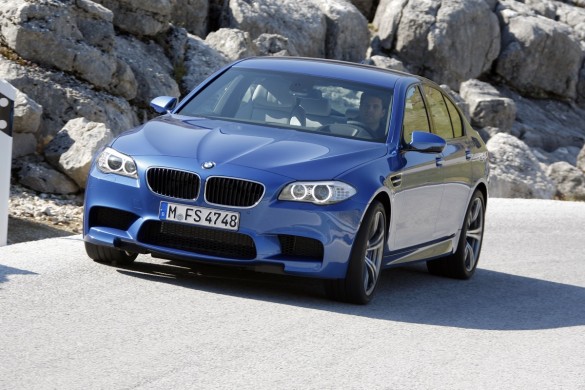 Stories of a diesel-powered BMW M-Series vehicle are nothing new. Like Bigfoot, an occasional sighting of a mysterious BMW diesel test mule reignites interest, and websites light up reporting that an M-Series diesel is just around the corner. BMW itself has added to the intrigue, releasing video of a fuzzed-out X6 M allegedly powered by an oil-burner engine.

If Germany’s Auto Zeitung (“The Auto Newspaper”) is correct, we’ll soon see a 5-Series sedan with both an M badge and diesel power. It will reportedly make 376 horsepower, but a serious 546 lb.-ft. of torque, thanks to a unique tri-turbo forced induction system fitted to its 3.0-liter engine. Despite this amount of grunt, the diesel-powered 5-Series M will get nearly 57 percent higher fuel economy than a gasoline-powered M5 sedan.

The 5-Series M will also have BMW’s xDrive all-wheel-drive system, ensuring that all that torque makes it to the pavement regardless of weather or road surface. Confirmation of the sedan comes from Dr. Friedrich Nitschke, the head of BMW’s M Division, and production is said to begin in March. Confirmation of the diesel M sedan doesn’t mean that diesel M crossovers are off the table, either: in fact production of both the diesel M X5 and X6 is set to begin later this spring.

All this is good news for those living in Europe, but the question remains: will we ever see an M diesel, in any version, on this side of the pond?