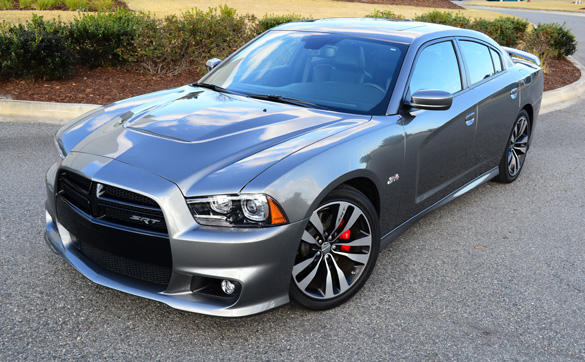 American automakers are back with a vengeance injecting the automotive market with vehicles for just about everyone. Enthusiasts should not fret when it comes to finding a large performance sedan that you can drive daily and occasionally on the track. Dodge has you covered with the new 2012 Charger SRT8. 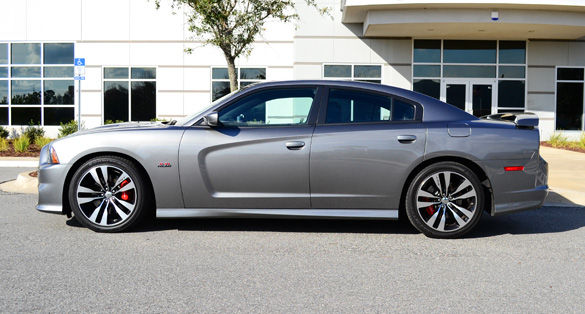 The 2012 Dodge Charger SRT8, sharing many mechanics with the 2012 Chrysler 300 SRT8, is still essentially a different vehicle. Both vehicles ride on the same platform but the new Charger SRT8 tends to tighten things up when it comes to the suspension tuning. Not only is the suspension tuning different on the Charger SRT8 (about 40% stiffer in the rear) compared to the 300 SRT8, but the interior also receives some subtle distinction. The gauge cluster is completely different but still features the same center color LCD information screen. The center-mounted 8.4-inch LCD touch-screen is virtually the same in both cars putting much emphasis on the graphic SRT performance information read-outs. Over-all drivability of the two is virtually the same. However, the higher level of stiffness from the adjustable dampers takes the Dodge Charger SRT8 to an even higher level when it’s in sport mode.

From a driver’s and passenger’s perspective, the new 2012 Dodge Charger SRT8 is better than the outgoing generation’s performance tuned Charger SRT8 by leaps and bounds. The new Charger SRT8 may have some owners of old Charger SRT8s hemorrhaging at the very thought of virtually every aspect of the vehicle being improved. Not only does the 2012 Charger SRT8 have more power, but it boasts added rigidity, an onslaught of performance gauge readouts, user-friendly controls integrated into the 8.4-inch LCD touch-screen, adjustable and active dampers, a refined interior and aggressive sport styling. Although, one thing remains the same and that is the stone age transmission with only 5 forward gears. 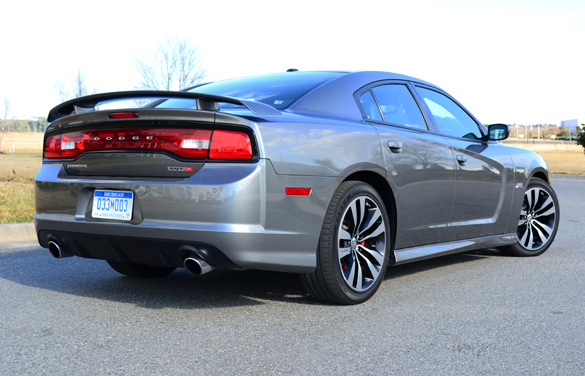 Exterior styling of the new 2012 Dodge Charger SRT8 is aggressive with its own personality set apart from other trim levels of the new Charger. The front fascia, from a reasonable distance, may appear to resemble a Nissan GT-R. If anything, that is a good thought considering how well we know Godzilla performs. The new Charger SRT8 also gets forged 20×9-inch wheels, upgraded Brembo brakes with painted calipers, a three-mode stability management system, rear spoiler and an integrated rear diffuser. There really is no mistaking the new Charger SRT8 for any other Charger trim level.

Inside of the new 2012 Charger SRT8 is somewhat of a compromise between luxury and sport. The well-bolstered front seats are definitely sporty and supportive. Conversely, the front seats have lumbar adjustments, suede-like Alcantara inserts, and their own heating and ventilation controlled through the center LCD screen. 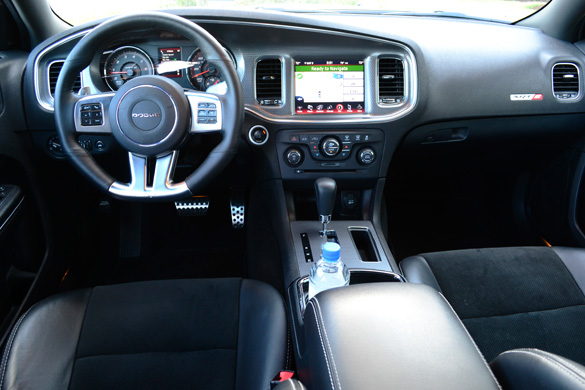 The redesigned dashboard is not as flamboyant as the indigo-blue backlit cluster featured in Chrysler 300. The Dodge Charger SRT8 has a more conservative cluster with a black face and SRT badges. The center stack is basically identical to the new 300 SRT8’s, which is a good thing considering the sporty carbon fiber trim pieces and location of the heated/cooled cup holders. Rear seating can be a bit cramped for tall individuals but otherwise provides enough space for 3 adults along the 60/40 split folding bench. The flat-bottom steering wheel seems a bit on the large side, nevertheless, there is no denying that you are navigating a large vehicle.

The all-new 2012 Dodge Charger SRT8, despite its sheer size, is not a boat. Nor does the new Charger SRT8 handle like a boat. You can think of it like a multipurpose cruising and fishing boat in one with extra stabilizers and a very large outboard engine. When you put the new Charger SRT8 into sport mode, via the on-screen controls menu, practically every behavioral part of the powertrain and the active suspension dampers are taken to a new level. By far, the dampers in sport mode on the new Charger SRT8 are the stiffest I have experienced on any stock 4-door vehicle. At times the ride gets a bit harsh in sport mode but remains manageable when tossing the Charger SRT8 around. Sport mode also changes shift patterns and holds lower gears longer than when in normal mode. 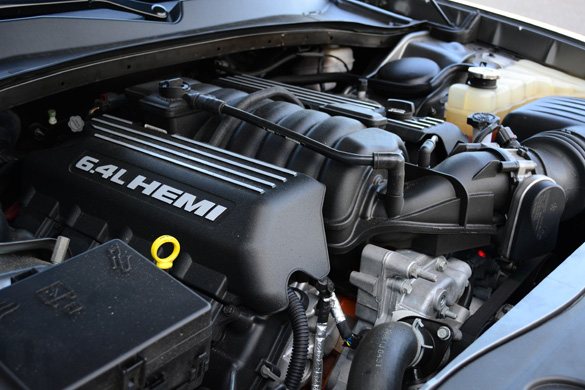 Cylinder deactivation is one part of the Charger SRT8 that makes it more of a sensible vehicle for the driver who just wants to cruise. The 23mpg highway figure is by no means astonishing, but it is not too bad for such a large and thirsty V8 engine pushing around 4,365 pounds. At times, the cylinder deactivation management goes into 4-cylinder mode with a bit of added drone sound when demanding certain levels of power. This commonly happens just before the cylinder deactivation mode goes back to firing all 8 cylinders. The engineers have already attempted to work out extra vibrations from only 4 cylinders firing, but may require some needed reprogramming to eliminate the drone noises.

Under heavy acceleration the new Charger SRT8 lets just the right amount of exhaust and HEMI intake manifold noises into the cabin. The sound is pleasing to say the least. Traction control seems to be rather lenient and will basically let the tires spin for a couple seconds before intervening. The 3-mode stability management allows you to disable it altogether giving you the freedom to light up the rear tires into oblivion. Trust me, you will do just that if you have enough time on your hands. The large HEMI engine has no problem laying down long strips of Goodyear F1 Supercar rubber to the pavement. 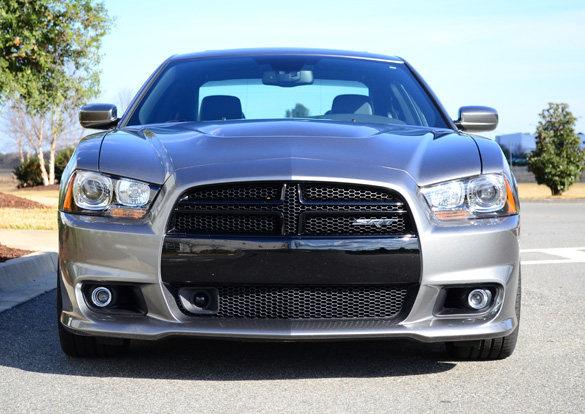 The new 2012 Dodge Charger SRT8 leaves many enthusiasts asking if it is a direct competitor to the Cadillac CTS-V. Actually, it is not. The Charger SRT8, being worth every penny of its $46,660 MSRP, is the definitive large American muscle car compromise for those who want an all-purpose 4-door vehicle. In the case of the Charger SRT8, all-purpose translates to long trips, daily commutes and occasional track days without any unwanted drama.