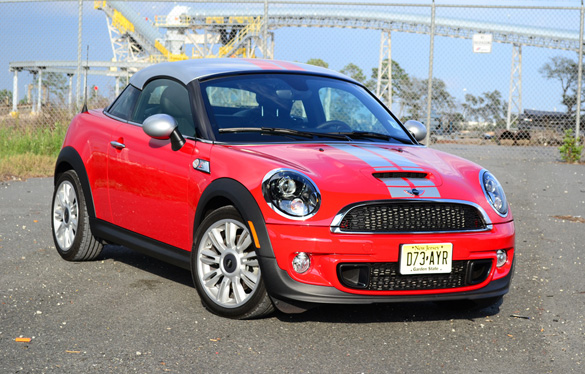 The all-new Mini Cooper Coupe is a reinvention of the 4-seater Mini cooper that we have all adorned for its surprising functionality, cool looks, fun-to-drive demeanor and small size. Conversely, the 2-seater Mini Cooper Coupe manages to subtract two seats from the original equation while adding subtle intricacy and excitement at the same time.

Having driven the new 2012 Mini Cooper S Coupe for almost week, I have grown to appreciate what the Mini is all about. What it lacks in terms of less cargo space, diminished rear visibility, and less seating than the 4-seater Mini Cooper S, it attempts to make up in the fun department. The Cooper S Coupe is almost more of a novelty rather than practical transportation in a small package. 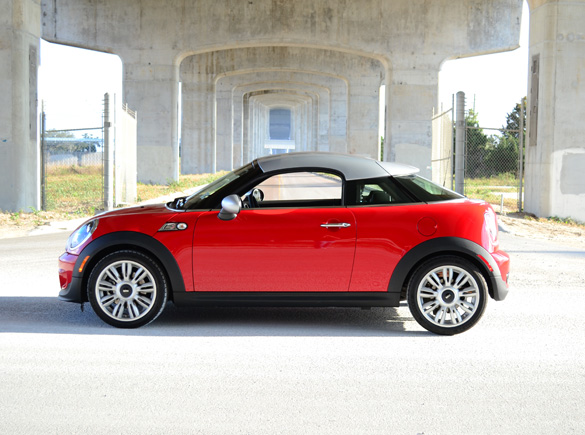 To support the impractical but fun transportation perception, BMW has injected the Mini Cooper S Coupe with added power from the previous generation Mini Cooper S. The new Mini Cooper S Coupe gets a turbocharged 1.6-liter inline 4-cylinder engine with an output of 181 horsepower and 177 ft-lbs. of torque. The little engine that could really turns out a respectable amount of power. The Mini Cooper S Coupe scoots along well and proves to be a nimble 2,600-pound two-seater subcompact.

One thing is for sure, the guys in the Italian Job would appreciate the new 2012 Mini Cooper S Coupe as it probably does not need many aftermarket modifications to make a quick get-away. However, they wont have much space to stow any of the “stolen” goods. 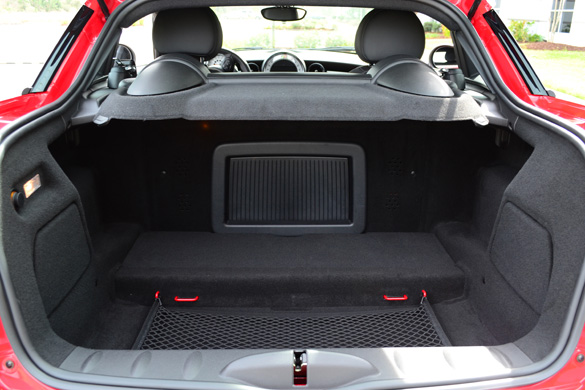 The new Mini Cooper S Coupe, with its strikingly distinctive looks, is very different from anything else on the road to say the least. Sure, you will quickly recognize it from the front-end that the new Cooper S Coupe is all MINI; but the off-colored low-rear-slopping roof throws some for a loop in terms of styling. The rear window has been miniaturized with limited visibility. Making things even worse, is a motorized spoiler that automatically rises to the occasion at around 50mph further hindering your rearward sight. The motorized spoiler, proven to be functional at high speeds, can be raised manually at any time but limits lowering once you have hit above 50mph. Drop below 45mph and it will automatically retract. 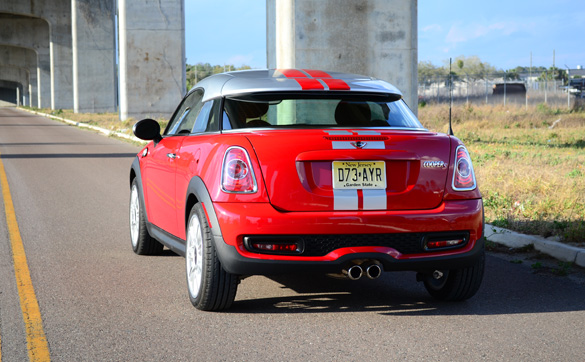 By bringing an original aesthetic to the Mini line, the new Cooper S Coupe initially strikes a chord with enthusiasts. Despite that fact that the Cooper S Coupe does not really give enthusiasts much of a performance advantage over the Mini Cooper S, the unique styling may be the tip to excite potential buyers.

Interior accommodations in the new Mini Cooper S Coupe do not depart much from the Mini Cooper 4-seater. Being a two-seater Mini, seating areas were kept ‘friendly’ for many different sized adults. Surprisingly, my 6-foot 3-inch frame did not have a problem with finding a suitable seating position. Even the roof had curved/domed cut-outs to provide the driver and passenger with added headroom. 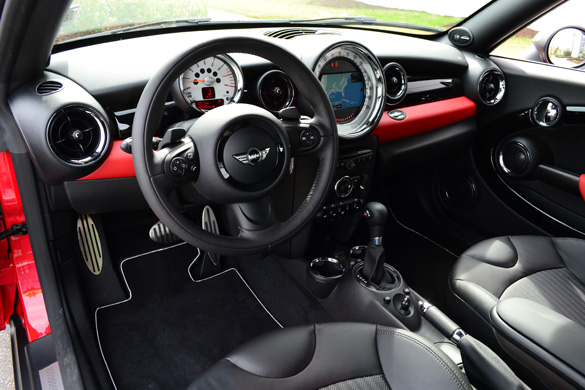 As in any Mini vehicle, the interior is customarily laced with BMW equipment, which proves to be user-friendly after spending some one-on-one time in a parking lot. The center speedometer, housing the rounded-off LCD screen for navigation, audio and other vehicle settings, proves to be clear and colorful. The toggle and navigation stalk located in the center console just in front of the arm rest, is convenient for navigating the LCD screen’s feature sets. Other vehicle controls, such as the windows, interior lights, spoiler control and door locks, are all arranged in retro-styled switches. In all, the interior does not sway far from other Mini siblings.

The new Mini Cooper S Coupe’s nimbleness expands only as far as the understeer limits. The interesting part about the Mini Cooper S Coupe’s understeer, is that you can only invoke abundant amounts of it with DSC (Dynamic Stability Control) completely off. That means putting the Mini into sport mode and hold down the DSC button for a few seconds until you see “DSC inactive” on the center LCD screen. It is not until then that the electronic limited slip is activated allowing the front wheels to virtually spin in synch when pulling some extra lateral Gs. Surprisingly, the Mini Cooper S Coupe has about 100 extra pounds to push around than the 4-seater Mini Cooper S. 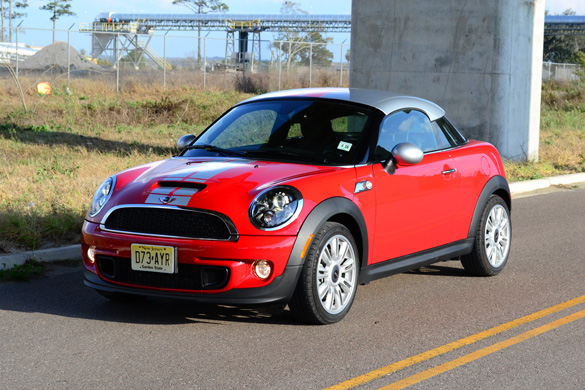 Steering response is sharp and unexpected from an electric power rack. The Mini Cooper S Coupe’s suspension bites back well when pushing the two-seater to the limit. The vehicle stays very flat in the corners and the short wheelbase remains to play in synch during spirited driving even at highway speeds. You do however feel a bit of harshness in the damper rebound, but it is somewhat expected when driving something as small as the new Mini Cooper S Coupe.

Power output to the front wheels, courtesy of a well-tuned 1.6-liter turbocharged 4-cylinder engine, is very healthy. With the snappy and quick-shifting 6-speed automatic box in my Mini Cooper S Coupe test vehicle, I was still able to break the front tires loose on several occasions. In manual shifting mode, using the steering wheel mounted paddles or floor shifter, the Cooper S Coupe will hold a gear until it reaches red-line. Don’t expect to bounce off of the rev-limiter at any time because the automatic box simply won’t let you. 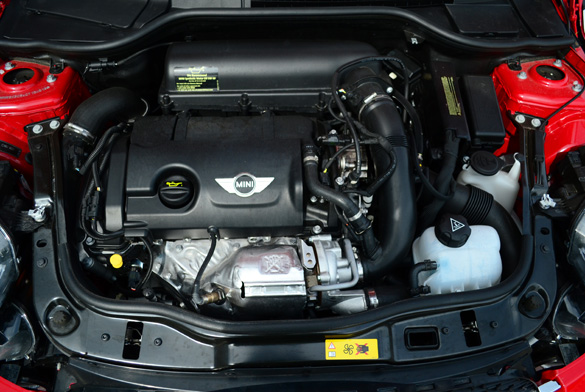 Rev-matching downshifts are fun especially when you get an astronomical amount of snap-crackle-pop sounds from the dual exhaust pipes. If the higher-performing 208-horsepower JCW (John Cooper Works) Mini Coupe has half the amount of popping sounds of unspent fuel and closing of the wastegate as the Cooper S Coupe does, then you will be in for an extra noisy treat when decelerating. Actually, I rather enjoyed the exhaust sound, which mentally promotes flogging the Cooper S Coupe to the point that you get pulled over by the cops. Yes, I did get pulled over by the local wildlife law enforcement for speeding and noise pollution. Luckily, I didn’t have to sign any dotted lines because the officer was in a good mood after sharing a few ‘choice’ words with me about the styling of the new Mini Coupe.

As it currently sits, the Mini brand has a wide variety of vehicles in many different sizes. Perhaps the all-new 2012 Mini Cooper Coupe is an afterthought appeasing those who want a bit more sports-appeal at the sacrifice of versatility and rear seating. Don’t get me wrong – the new Mini Cooper S Coupe is definitely a neat little pocket-rocket, it just does not appeal to a mass nearly as large as the well-known Mini Cooper 4-seater variants. At a loaded-up as-tested price of $33,400, I sure hope the 34mpg highway figure pays off in the long run. Of course you can opt for a stripped-down version of the all-new Mini Cooper Coupe at a starting point of only $21,300.