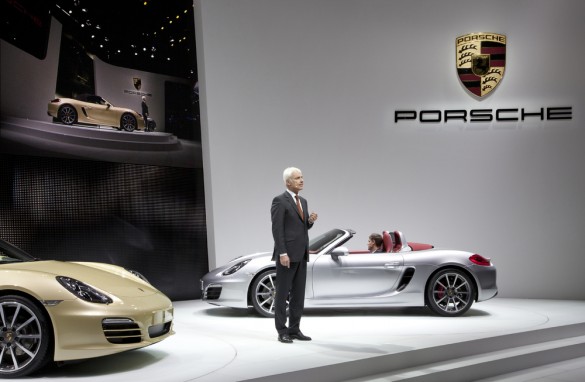 Porsche isn’t finished introducing new variants of the revised 911, but that hasn’t stopped the Stuttgart-based automaker from redesigning the Boxster roadster. Introduced at this week’s Geneva Motor Show, the new Boxster is lighter, yet it rides on a longer wheelbase and benefits from a wider track. The styling is refreshed but not all new; the shape is still familiar, but we see some elements of other Porsche models (like the upcoming 918 supercar) in the new sheet metal. We say that’s a good thing, since the current Boxster was started to look a bit dated on the outside.

Porsche calls the Boxster’s chassis “completely revamped”, and the new car benefits from shorter body overhangs, larger wheels, increased interior space and improved fuel economy. Base models get a 2.7-liter flat six good for 265 horsepower (10 more than the current Boxster), while the Boxster S will come with a 3.4-liter flat six rated at 315 horsepower (5 more than current models). Buyers get a choice of either a six-speed manual or a seven-speed PDK dual-clutch automatic gearbox; while the six-speed may be more emotionally satisfying, the PDK is the way to go for the lowest lap times.