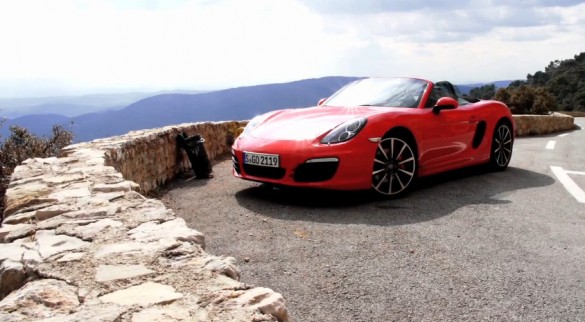 The Mazda MX-5 Miata is not the only car with gender identity issues, at least according to Evo’s Chris Harris. In his latest video, Harris ponders if a man can actually buy the newly redesigned Porsche Boxster S, which seems to imply that no man would be caught dead behind the wheel of the current Boxster and Boxster S. That’s a shame, since the car is one of the most balanced sports cars on the planet, which means that drivers with security issues will be missing out on a highly entertaining ride. Lucky for us that we review cars instead of stereotypes.

Porsche’s latest Boxster models are lighter, longer and wider than the cars they replace, and feature shorter front and rear overhangs. The faster Boxster S rides roughly a half-inch lower than the outgoing model, and now comes packing a 3.4-liter flat six good for 315 horsepower. That’s good enough to dash from 0-62 mph in five seconds with a six-speed manual transmission, or 4.7 seconds when equipped with Porsche’s seven-speed, dual-clutch PDK gearbox. Top speed is 170 miles per hour, which has Harris asking the question, “Do you really need more car?”

That’s not to say the Boxster S is perfect. Like many cars, it now comes with electric power steering, a concession towards boosting fuel economy and lowering emissions. While precise, it lacks the feedback present in the old Boxster’s hydraulic steering system. As Harris points out, electric steering is here to stay, so complaining about its weaknesses is a moot point.

Harris also notes that Porsche’s Stability Management system can’t be fully de-activated. It still allows for tail-out slides through corners, but the system now appears to intervene when things get too out of hand. Could this be operator error? Perhaps, but it’s equally likely that Porsche is feeling the pressure from regulatory agencies to build cars for its least competent drivers.

Need more proof? The brake pedal is too high and too far away from the throttle. While this may reduce the incidence of drivers mistaking the gas for the brake, it also makes the Boxster more difficult to heel and toe. The handbrake is gone, too, replaced with an electronic brake that makes handbrake turns impossible, but likely prevents the car from rolling on steep grades. The Boxster S is faster, to be sure, but it’s also built more for drivers that shouldn’t be in anything faster than a Prius.

Harris likes the car, despite the potential challenges to his manhood. We do too, and we’d be happy to park one in our garage, stereotypes be damned.