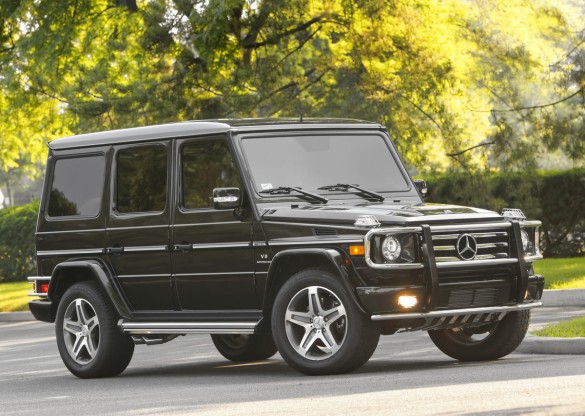 The G55 AMG, as fast as you can go off-road today. Image: Mercedes-Benz

When an all-new model is about to drop, generally it’s the manufacturer and not a local dealer that breaks the news. Imagine our confusion, then, when a press release confirming the launch of two new G Class models hit the wire yesterday, originating from a Mercedes dealership in New Orleans.

Mercedes-Benz has been very tight-lipped about the existence of a G63 AMG or a G65 AMG version of its go-anywhere G Class. Spy photos have been showing up for years, and Mercedes allegedly custom built a limited run of G63 models for select (i.e., wealthy and influential) customers a few years back.

According to Motor Authority, the G63 AMG will replace the current G55 AMG (shown here) and will pack some 536 horsepower into a twin-turbo, 5.5-liter V-8 engine. Just in case that’s not fast enough or expensive enough for your tastes, the G65 AMG will get a twin-turbo V-12 good for 621 horsepower and an earth-moving 737 pound-feet of torque. Pricing wasn’t mentioned for either model, but it’s safe to assume the G63 AMG will be “very expensive,” with the G65 AMG coming in at “very, very expensive.”

Mercedes-Benz has yet to confirm or deny the existence of either G-Class model, but this much is clear: if the automaker was planning on launching the SUVs in the United States, a certain dealership will have a lot of explaining to do.