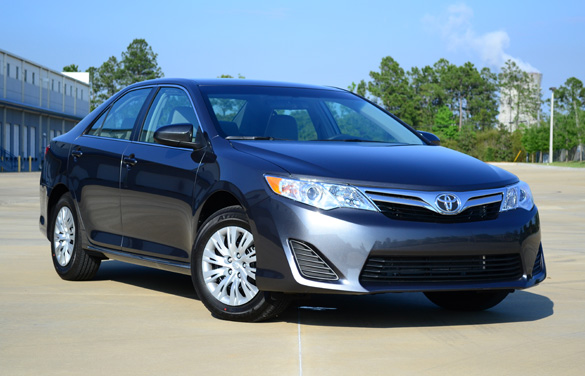 In a way, the Toyota Camry has set the benchmark for the mid-sized sedan segment year after year. Not only have the monumental sales figures of the Toyota Camry surpassed others for many years, but it keeps the market competitive while others attempt to outshine certain aspects of the Camry. Being a redesigned vehicle for 2012, the Toyota Camry continues its tradition in contemporary styling delivering everything that is expected of the #1 seller in America.

For 2012, the Toyota Camry is completely redesigned. Styling does not depart too far from the previous generation but adds a few cues giving off a slightly larger size of the new Camry. This year the Camry uses virtually the same engines only slightly re-worked to produce more power while remaining efficient. The new 178 horsepower and 170 ft-lbs. of torque 2.5-liter 4-cylinder engine, found in my Camry LE test vehicle mated to a 6-speed automatic transmission, is surprisingly peppy. The added power and torque over previous year’s 4-cylinder engine makes the new Camry sprightly and no longer a major slouch when toting around 4 other occupants. Those looking for more performance attributes will want to opt for the optional silky-smooth 268 horsepower V6. 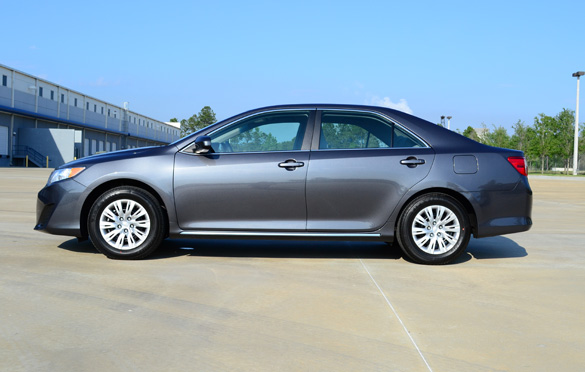 Buyers of the new 2012 Toyota Camry will be happy to know that Toyota has taken steps to make the driver and passengers more comfortable. Seating positions in the front have been tweaked to allow additional rear seat legroom. Over-all, the interior is plenty spacious and could rival larger luxury sedans. The new redesigned dashboard and cluster in the Camry LE is full of plastics, but Toyota somehow manages to avoid a cheap perception through clever plastic moldings. Some of the moldings even integrate faux stitching within a flexible plastic material. 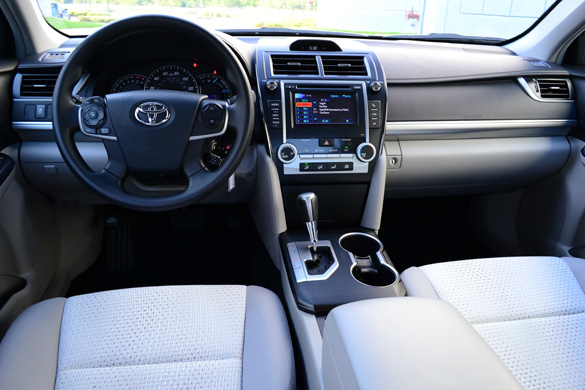 Dashboard controls are kept simple while a new color LCD touch-screen is standard equipment. Oddly enough, in the base L or LE trim levels without any tech options, the touch-screen is only utilized for a few vehicle connectivity settings. These settings include standard Bluetooth connectivity and audio controls. My Camry LE only included a power driver’s seat and floor mats as options. Some buyers will find this setup to be the most practical for their wallet as it kept the pricing to a minimal as-tested $23,925. 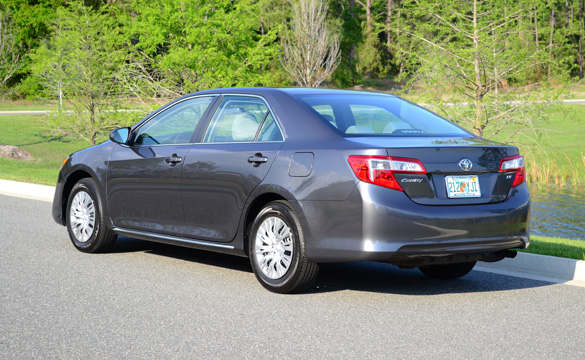 Driving the new 2012 Toyota Camry is somewhat subdued due to the numb electric power steering. Road noise and suspension dampening is admirable and almost on par with some luxury vehicles without too much bounce. Where things start to remind you of the Camry LE’s lack of enthusiasm, is when you start to push the suspension to its limits in turns. Body roll is definitely noticeable but not over-dramatic.

Power delivery from the 4-cylinder engine in the Camry LE is somewhat smooth thanks to the advanced learning curve of the 6-speed automatic transmission. When power is demanded, it is made available in a quick fashion without too much hunting for the proper gear. Fuel economy has always been a great selling point for the Camry and the 2012 does not disappoint with mpg figures at 25 mpg city and 35 mpg highway. Although some competitors are just now exceeding the Camry 4-cylinder in highway fuel mileage, it only reemphasizes the value of the all-new 2012 Camry Hybrid, which gets 43mpg city and 39mpg highway. 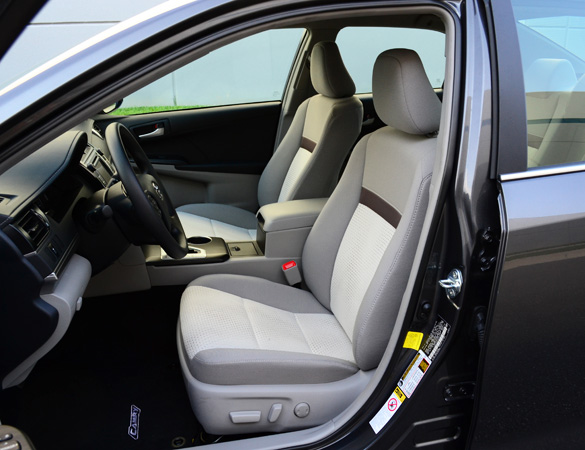 Although my 2012 Toyota Camry LE lacked thrills and options, it remains to have the long touted build quality and quite ride. The Camry has a modest list of standard features as Bluetooth phone connectivity, Bluetooth audio streaming, AM/FM/MP3/CD Audio, variable intermittent wipers, 60/40 split folding rear seat-backs, cruise control, auto projector-beam headlights, ABS with brake assist, a total of 10 airbags and other ‘expected’ items to conclude the list. Of course it all sounds basic in the scheme of competitors offering a few more amenities on their entry-level mid-sized sedans. With that said, Toyota is probably hoping its long lineage of reliability and nameplate recognition will shine through the finicky consumers considering base level Camry trims. After-all, the Camry didn’t just recently become the best seller, it has been #1 since 1997 (with the exception of the 2001 model year). 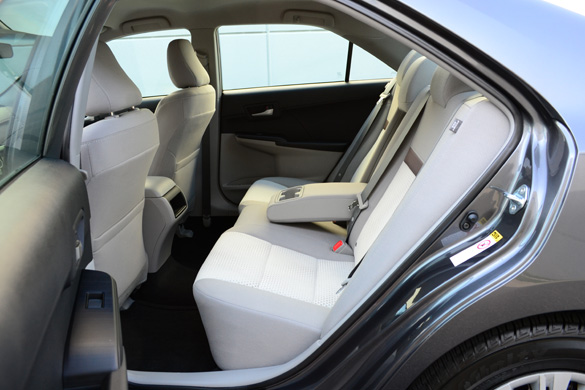 The trim levels of the 2012 Camry are basically the same as last year. The base model now starts off as the L and then moving up the LE, SE and XLE trim levels. The sporty SE model adds the V6 engine while the XLE opens up the full options list and can be equipped with either the 4-cylider engine or V6. The modest starting price of the Camry L is $21,995 while the XLE gets a base price of $24,725. A nicely equipped 2012 Camry SE V6 will run you around $28,000 and a loaded up XLE V6 could reach the low $30,000 range. 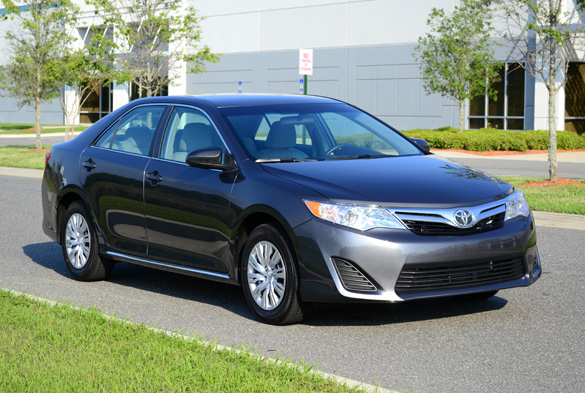 In-all, the redesigned 2012 Toyota Camry retains its prestige and benchmark status looking for yet another year of record sells. If there is any such thing as the best tasting Vanilla Ice Cream, this is it.