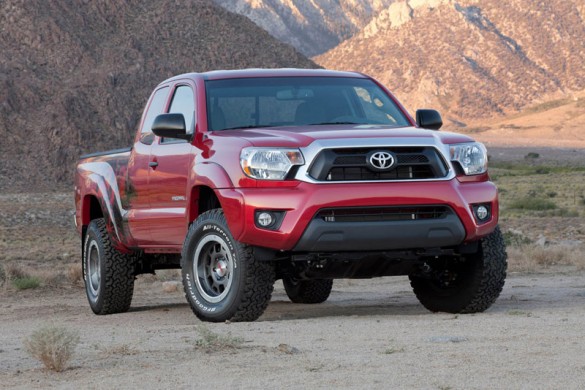 The Toyota Tacoma, on its minor refreshing for 2012, gets a new limited edition TRD package dubbed the TRD T/X Baja. Onlookers received a glimpse of a pre-production Tacoma TRD Baja edition at previous shows such as SEMA and the Texas State Fair last year. Now we get official details and pricing on Toyota’s Off-Roading Tacoma Baja edition.

Some Toyota execs will call this tricked-out off-roader Toyota’s Raptor. I would not go as far as to call it that, however, the Baja Off-Road package does consist of front/rear Bilstein shocks, BF Goodrich T/A KO tires (LT265/70R16), bead-lock style off-road wheels, increased front lift by 2 inches, a TRD catback exhaust system and custom Baja graphics. 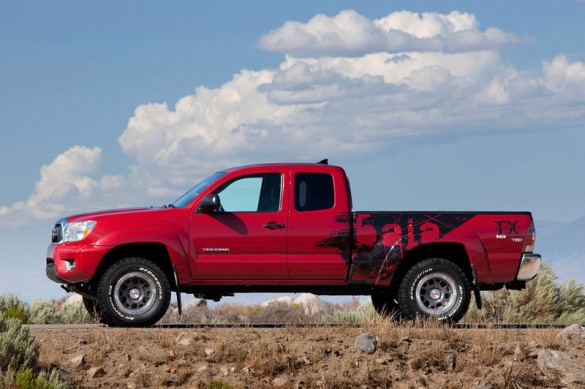 Pricing for the new 2012 Toyota Tacoma TRD T/X Baja edition (Access Cab) equipped with a manual transmission will start at just $32,990 plus a delivery fee of $810. For those shoppers who have already taken the liberty to configure a new Tacoma with just the Off-Road package, they will find out that the new Baja edition comes out to be cheaper in the end. 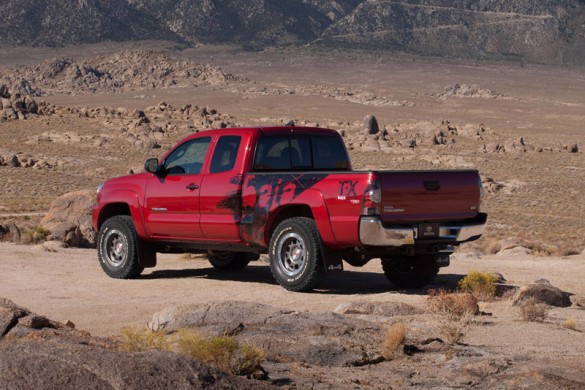 If you ask me, this Toyota Tacoma TRD T/X Baja edition is the way to go for a ‘lesser Raptor’ that happens to be easier your wallet. Look for the 2012 Tacoma TRD Baja to hit dealerships next month (May 2012).

Hit up the full press release below for additional information.

Toyota has a rich Baja racing heritage that dates back nearly three decades and includes numerous titles at the legendary Baja 500 and 1000. Toyota’s desert racing program has inspired the development of numerous TRD off-road focused products and packages over the years including the Tacoma PreRunner and TRD Off-Road packages for both Tacoma and Tundra. Last year, Tacoma’s Off-Road Package was enhanced with the launch of the TRD T/X and T/X Pro packages. TRD now takes Tacoma off-roading to the next level with the development of the T/X Baja Series.

The T/X Baja Series will be part of a Tacoma line that was updated for 2012 with a restyled front end and a refreshed interior in all models. Exterior changes included a redesigned hood, grille, headlamps and front bumper, among other changes. Inside, Tacoma received a new center-instrument panel design with a revised gauge cluster, along with a new steering wheel. A redesigned center stack added new air conditioner/heater controls and power point locations.

All Tacoma TRD T/X Baja Series models will be built exclusively at Toyota Motor Manufacturing, Texas (TMMTX) in San Antonio and will reach dealer showrooms in May 2012. Prices for the Baja Series Tacoma do not include delivery, processing and handling fees (DPH), which are $810. The DPH fee for vehicles distributed by Southeast Toyota (SET) and Gulf States Toyota (GST) may vary.

All prices listed above exclude the Delivery, Processing, and Handling (DPH) fee of $810