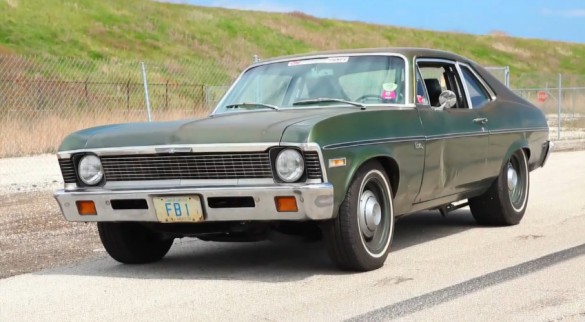 At first glance, Dru Diesner’s 1972 Chevy Nova isn’t a car you want to be seen in. It’s time-faded paint has gone from simply ugly to hideous, and its flanks are marred by dents and dings. The wheels are steelies with dog-dish hubcaps, sporting 1970’s chic whitewall tires that look as if they’ve come from the “any tire $5” pile. It’s so ugly that we wouldn’t even call it a rat rod; instead, it’s just plain ratty.

Don’t think of the outside appearance as anything but camouflage, since under the hood lurks a twin supercharged LS2 V-8 that produces some 1,160 horsepower – at the rear wheels. We’re fairly certain that’s more than a Bugatti Veyron Supersport, which makes 1,184 horsepower at that crank, but significantly less to the wheels.

Wheel to Wheel Powertrain’s Kurt Urban (now owner of Kurt Urban Performance) built the car to be the ultimate sleeper. Roll up next to it at a stoplight, and you’ll never notice the carefully hidden roll cage, or the release lever for a parachute. Challenge Diesner’s Nova and you’ll find that it runs the quarter mile in the nines, which puts it into a very small club of street-legal vehicles.

Diesner’s Nova may be mind-numbingly quick in a straight line, but road courses aren’t the cars forte. Like any 1970s Nova we’ve ever driven, the car’s steering precision is somewhere between “vague” and “nonexistent,” which doesn’t exactly inspire confidence at speed. We complain about an inch or two of steering play in new cars, but cars like the Nova came from the factory with inches of play in the wheel, and worn steering components only make this worse.

While we love sports cars and exotics, there’s a place in our heart for Q Ships like this, too.