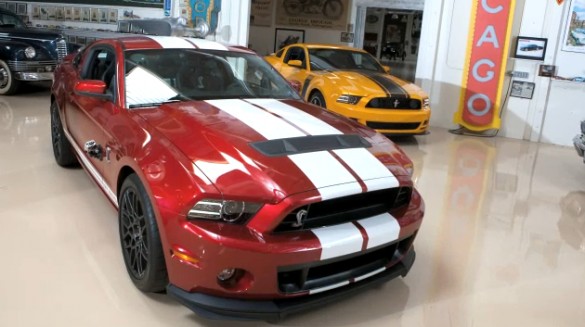 The best part of being Jay Leno isn’t the ability to get a seat at any restaurant in America, any time you want. Instead, it’s having manufacturers bring you new cars to drive before anyone else (even us journalist types) gets their hands on them. Leno has a thing for Mustangs (and Fords in general), so it’s a given that Ford would would send its chief engineer from SVT with a pair of 2013 Mustangs to visit Jay Leno’s Garage.

Leno gets the honor of being the first “civilian” to drive the new, 662 horsepower Shelby GT500. While the limits of such a car can only be probed on a racetrack (or the Autobahn, as Leno points out), the comedian and uber-car-guy finds the GT500 docile and comfortable enough to use as a daily driver. He’s not happy, however, that it produces more horsepower than his Ford GT, and we suspect he’s already got a 2013 Shelby GT500 on order.

We haven’t driven the 2013 Shelby GT500 yet, but we’ve heard some good things about it. It’s much like the earlier models, with significantly more grunt and (thankfully) an improved shifter. If it were us, we’d opt for the Boss 302 with the Laguna Seca package over the Shelby GT500, since we favor the road course over the drag strip. The $10k cost savings pays for a lot of track days, tires and brake pads, too.