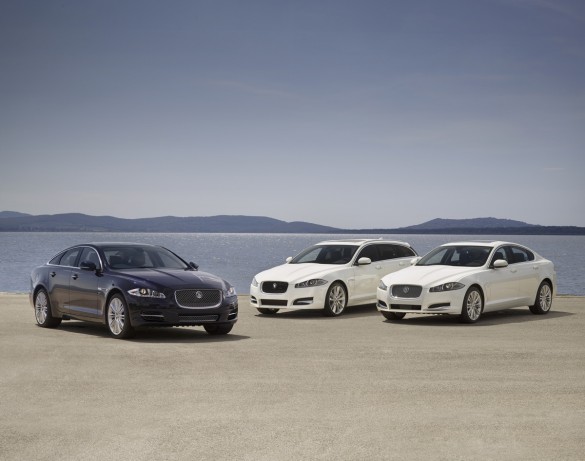 When it comes to engines, U.S. buyers of Jaguar XJ and XF models have had it pretty easy. On these shores, both Jaguar sedans came packing a 5.0-liter V-8, so the only decision to be made was “normally aspirated” or “supercharged.” Since even the base engine made 385 horsepower and 380 pound-feet of torque, the decision was usually made by the consumer’s budget.

In Europe, there are a dizzying array of engine options available for Jaguar models, starting with a turbodiesel four and running through a variety of gas and diesel V-6 models before topping out at the V-8 variants. Jaguar does this to broaden its appeal to a wider variety of customers, but also to meet stringent Euro 5 emission standards.

For 2013, it looks like buyers in the U.S. will get a broader range of engine options, too. Though market-specific details are still a bit hazy, it looks like Jaguar will drop the normally aspirated 5.0-liter V8 from base XF and XJ models, replacing it with a supercharged V-6.

The new-to-the-U.S. engine will make 335 horsepower and 331 pound feet of torque, which is noticeably less than the previous V-8. The big gains come in fuel economy, and Jaguar reports that the new engine is some 14-percent more fuel efficient than the unit it replaces. It should be lighter, too, which will make the new base XF and XJ models feel less nose-heavy than their predecessors. All engines, regardless of output, now come mated to an eight-speed automatic transmission.

If that’s not enough horsepower to amuse you, don’t worry: you’ll still be able to get both the normally-aspirated and supercharged V-8s, which also pick up fuel economy gains of 8 and 11-percent, respectively.