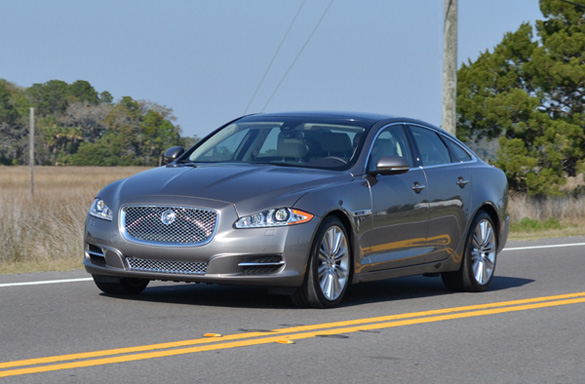 If you enjoy driving in the lap of luxury, then you may fit the profile of someone who may consider owning a Jaguar. Jaguar vehicles are well recognized by enthusiasts as well as the common Joe, both who admire some of the finer things in life. The all-new Jaguar XJ, despite its somewhat unfamiliar good looks, wears its new skin very well distinguishing it from the rest of the luxury car crowd.

Totally redesigned for 2010, the new Jaguar XJ literally leaves behind whatever statement the outgoing model made. The XJ is Jaguars flagship that once housed V12 engines under the bonnet and dates back to 1968. Nowadays, the V12s are replaced by supercharged V8s, which is what’s found in the new supercharged XJ. The new 2011 Jaguar XJ has innovation written all over its exterior and is subtly carried into the lavishly appointed interior. In other words, today’s hip-culture would say that the new Jaguar XJ is so 3008 while the old Jaguar XJ was 2000-late. 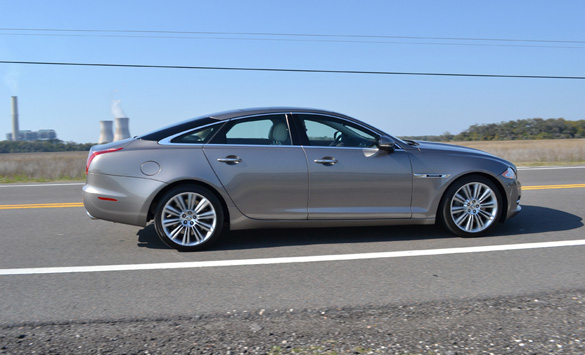 The new Jaguar XJ, in my opinion, is a sexy machine that likes to stretch its legs on the highway. The British, back in the day, were known for building eye-catching and competitive racing vehicles, while also satisfying the exquisite needs for those seeking a luxurious touring automobile. Some will say that this tradition faded into the background between years 2000-2006 when Ford had its hands in designs such as the Jaguar S-Type based off of Lincoln LS. It was not necessarily a bad thing at the time given the sales figures. Quite possibly Jaguar put things in motion in a different direction when it comes to the design of the new XJ, which has minor design cues from the smaller XF. Regardless, the new Jaguar XJ is here to make a serious statement to its competition putting it in a position to pounce on someone.

My test Jaguar XJ was the supercharged version with a 470 horsepower 5.0-liter V8 engine. This setup comes with a thirst for massive amounts of premium fuel getting only 15mpg city and 21mpg highway. I averaged about 17.5mpg around town and was able to match the 21mpg figure on the highway. 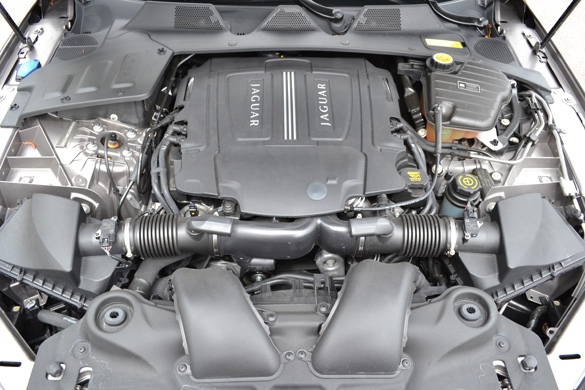 Jaguar XJ’s are offered in a base configuration in either long wheelbase (LWB) or short, supercharged, supercharged LWB, Supersport, and Supersport LWB. Base models start with a 5.0-liter V8 producing 385 horsepower and 390 foot-pounds of torque. The Supercharged versions have an increased power output to 470 horsepower while the top-of-the-line Supersport has a stout 510 horsepower and 461 foot-pounds of torque. The long-wheelbase XJs get an additional 4.9 inches in wheelbase length, which adds another 5.2 inches to rear legroom. 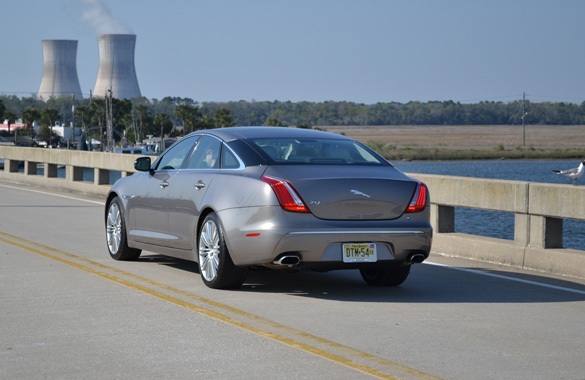 You could, in a way, call the Jaguar XJ a British version of the new BMW 7-Series. But I won’t go as far as to intertwine the German brand with a Jaguar because they are essentially two differently designed vehicles. In the Jaguar XJ, the moment you sit down in the fully leather appointed cabin, you will know that this vehicle has no relation to Munich, Japan, or America for that matter. The XJ is enveloped with a fully leather covered dashboard, an Alcantara headliner surrounding the panoramic sunroof, an abundance of burl wood trim, and soft thick carpeted floors. The motorized turn-knob shifter and airplane engine styled vents give away the Jaguar heritage embedded into the aesthetics of the car. Although the new innovative large LCD screen used as the dash gauge cluster seems a bit out of place, it is very functional and fits well with modern automotive innovation. Additionally, I am personally not a fan of replacing dashboard needles with a highly configurable LCD screen, yet it brings a new type of classiness to luxury and exotic cars of the modern world. My XJ test vehicle was optioned out with a heated front windshield that has several micro-thin heating elements running through the glass. This can be a nuisance if you take notice at night to the glare it creates of oncoming vehicles or other light sources. Nevertheless, the heated windshield does come in handy for quickly clearing frost. 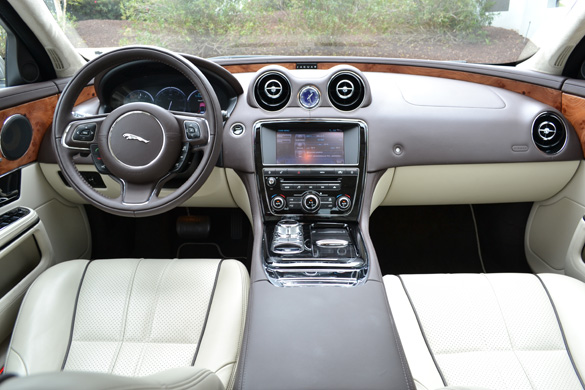 The cabin of the new XJ is very sumptuous. Seating positions are excellent with some room to spare even when setting my 6-foot-plus frame in the rear seats. I can only imagine the extra space in the XJL; long wheelbase version. Some of the controls take a little getting used to but otherwise understandable to buyers of a big luxury vehicle. The only pitfall is the response time of the central controls integrated into the center LCD touch-screen. Pressing any button or LCD on-screen button has an annoying delay. This is something you would not expect from a vehicle of this class. From turning on the seat massagers, to adjusting the radio/Satellite station, the buttons take too long to respond. This is a shame because the interface is well done and user-friendly. Unfortunately the user-friendliness is overshadowed by the slow responding controls. It may be possible that a firmware update in later XJ models could resolve this issue. 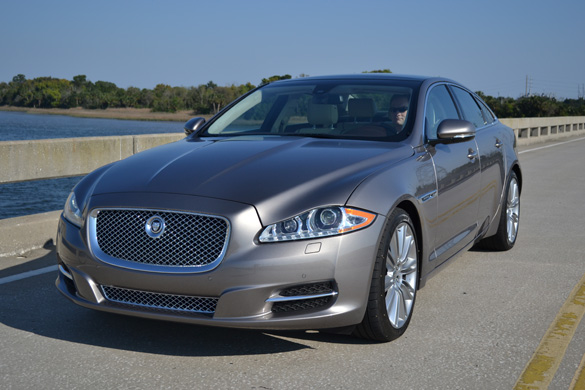 During my time with the new Jaguar XJ, I was able to enjoy the heated, cooled and massaging leather seat up front. The rear seating areas were heated and cooled only. The 1200-watt Bowers and Wilkins (commonly referred to as “B&W”) sound system was among the best in the industry with crisp treble and clear thumping bass tones. The center console chrome accents near the armrest become rather blinding at times due to the sun reflecting from the surface. This is a minor issue but one to note due to the abundance of shiny material in front of the armrest storage area where you can conveniently plug in your iPod/iPhone or other USB media device. 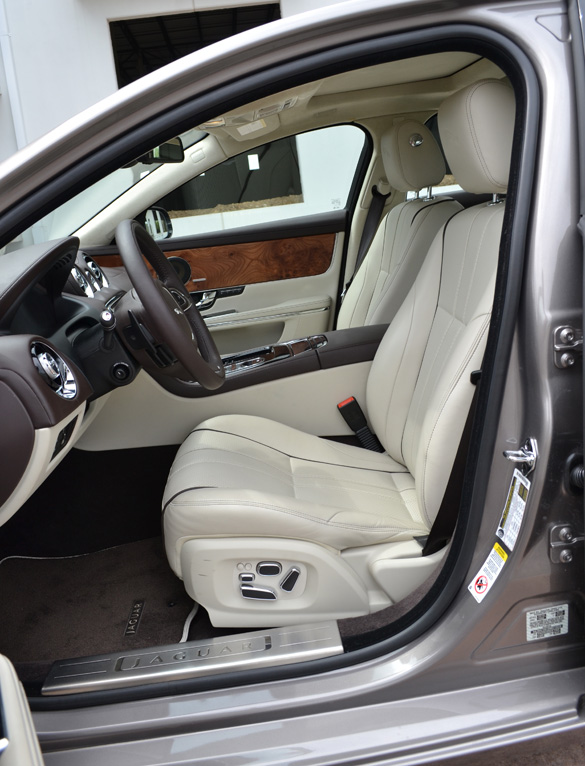 Driving the new XJ puts you in a world of serenity mainly due to the soft supple ride and smooth power delivery. The 470 horsepower supercharged V8 was never shy about directing a massive surge of power through its snappy-fast shifting 6-speed automatic transmission. Surprisingly the transmission shifts relatively fast for an automatic, somewhat reminiscent of a dual-clutch setup especially when using the steering wheel mounted paddle shifters. Dynamic mode, turning the virtual LCD dashboard’s gauges background to red, brought the XJ to an even more aggressive level by advancing the throttle position and firming up the active dampening shocks. Putting the shift turn-knob to the “S” position will allow you to manually shift the 6-speed transmission and even blip the throttle to hear the rumble of the sweet blown-V8 engine. 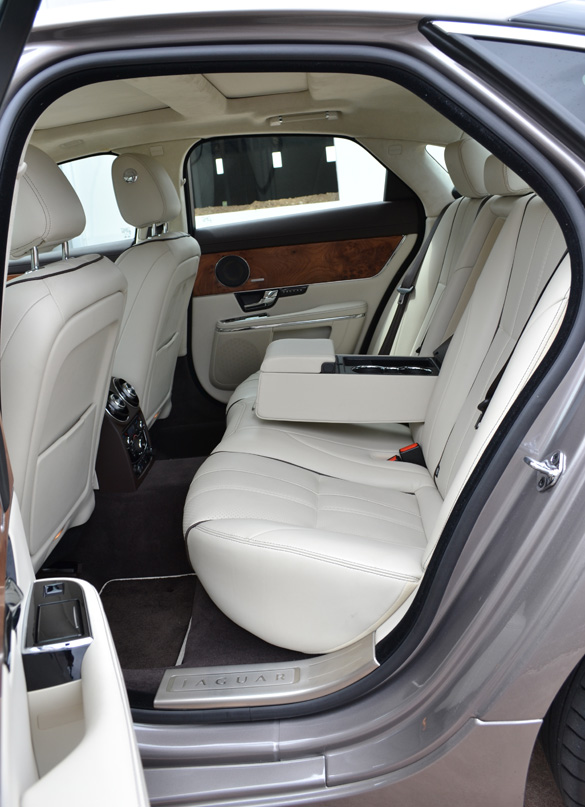 The feel of the steering for the XJ can be a bit unpredictable at times until you get used to the vehicle. This could be due to the variable steering assist. The chassis of the XJ handles bumps like a big luxurious land-yacht should. You never get that boating-effect because the active dampers do a great job with managing this 4,281 pound cat. You are reminded that this lateral rocket-ship is not a sports car once you enter into your first aggressive corner, but that’s not what the Jaguar XJ is designed for. Comfort is what you will get and you get it in abundance. Using the Automatic Speed Limiter comes in handy so you do not end up going too far over the speed limit. This 470 horsepower supercharged cat can get away from you at times if you are not paying attention because it is an extremely refined and quite ride. 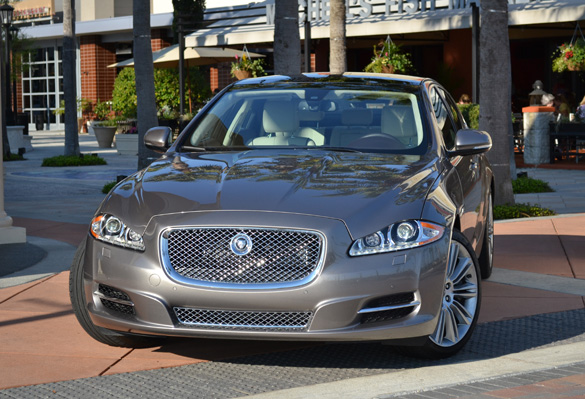 The new Jaguar XJ is the ultimate epitome of British luxury fit for the modernistic world. If ever someone is seeking an exquisite luxury wrapped up in an eye-catching stylistic package, then the XJ is the cat that you want to take home. The base Jaguar XJ starts at $72,700. My supercharged Jaguar XJ starts at $87,700 and was optioned out with just the heated windshield bringing the total to $88,950.